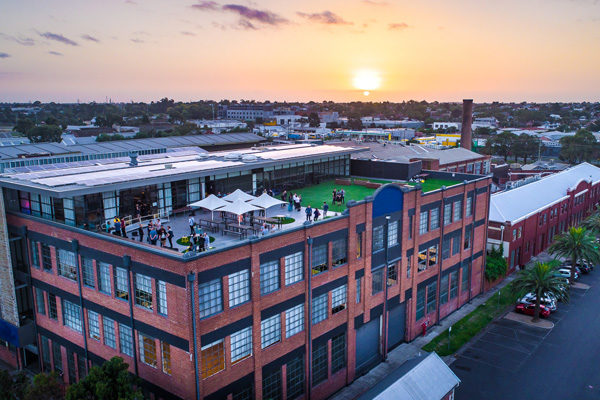 After the gradual departure of its eponymous tenant was completed last year, the almost 100 year old wool store building seemed destined for another sustained period of vacancy, followed by the inevitable division, refurbishment and sale as exorbitantly priced apartments.

But something has already started to sprout. No, it’s not weeds, it’s ideas. The Lonely Planet building on the Maribyrnong River has been reborn as The Dream Factory, a growing co-working space with a focus on technology, innovation and social change.

Impact Investment Group bought the building two years ago with a view to offering a space for “socially conscious start-ups, freelancers, creatives, and emerging technologies”, but much of the appeal lies in the building’s layout, the benefit of a Google style fit-out in 2000. Lonely Planet founder Tony Wheeler had an acute sense of adventure, an entrepreneurial spirit and a drive to effect social and economic change, all of which have remained with the building since his departure.

Anchor tenants Inspire9, the organisation overseeing the building’s space management, Engineers Without Borders, and cohealth have led the charge to fill the building’s 7000m2 of co-working space over four levels.

So who can join them here, taking in the fabulous view across Melbourne’s port and CBD skyline?

“It’s incredibly appealing for socially responsible organisations with a focus on community or global change. But it’s also an opportunity for start-ups with integrity and passion to  feel empowered.”

In addition to the clear collaborative and networking opportunities, it will soon also boast its own café, gym and bike- store, and over time will open up a ‘Makerspace’ for designers, proto-typers and builders, as well as a Virtual Reality lab that promises to be a hub for Melbourne’s VR community. Even more impressive is Australia’s first industrial Tesla batteries, storing solar energy from the building’s roof, with plans to build one of the largest rooftop photovoltaic solar systems in the country.

This renewable energy system provides tenants with free power and is projected to cover its costs within 10 years.

Where does Conrad see the building’s appeal?

“A lot of people work in the CBD in uninspiring offices, set amongst concrete wind tunnels with little light or greenery. The Dream Factory offers a sense of enhanced community, rather than a bland bureaucracy.”

“Co-working spaces have tended to have a fairly male focus, but diversity and inclusiveness are key selling points, we welcome all types – just bring your ideas”.

The recent addition of She Will Shine, an organisation connecting and supporting women in business, is an example of this philosophy in practice.

But co-working spaces are not all born equal. What works in Richmond – Inspire9’s existing project – may not necessarily be relevant or appropriate in Footscray.

“We had to rethink our approach,” said Conrad. “It’s a different demographic, the community has unique habits – fantastic potential and we want to see that activated in the west.”

The plans are attractive when you consider the collaborative value of this inspiring space. Day rates are $40+GST, or its $175+GST for a week. Currently an introductory monthly plan is available for $495+GST.

With that you get use of all facilities – kitchens, bathrooms and meeting rooms, as well as Wi-Fi and access to the online community and learning workshops.

Tony Wheeler once said “All you’ve got to do is decide to go and the hardest part is over. So go.” If you can imagine yourself wandering each day into a fresh new space filled with positive energy, a common vision and indoor plants, contact Inspire9 and take a tour.

The Dream Factory is at 90 Maribyrnong St, Footscray. Contact conrad@inspire9.com or the Community Manager hannah@inspire9.com

BRINGING PETS TO THOSE WHO NEED THEM MOST