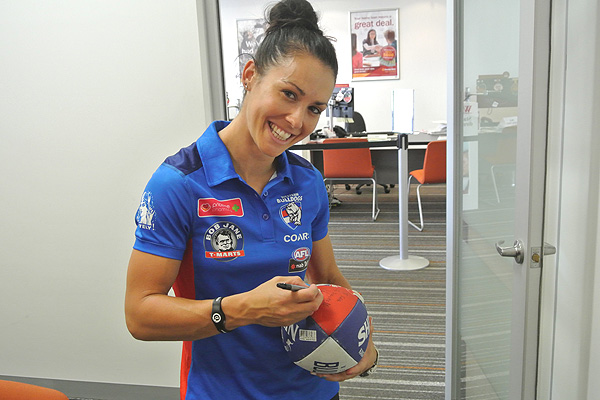 Under lights, on a balmy summer evening, AFL women’s football burst through banners into Melbourne’s imagination with refreshing new stories. And you need go no further than Western Bulldogs’ Nicole Callinan. The versatile midfielder has made it to the top in two sports. Hard work, the right stuff, support of family and friends… plain dumb luck. All part of making an Aussie sporting dream come true. Twice.

Fingernails neatly painted red, white and blue are a giveaway. Yep, this must be Nicole who told me over the phone she prefers Nicky. Less formal. For a second, I’m at odds reconciling the young woman before me wearing an elegant watch and delicate earrings with bone-crunching football on-field clashes.

Nicky is autographing a teen fan’s football. ‘How do you spell her name?’ she asks with a hint of sunburnt country, enough to know Bulldogs’ number 10 is unpretentious and down to earth.

“We played football in the backyard. It was me and dad against my two brothers”

Nicky’s played elite sport before, but it’s slowly dawning what being part of the AFL Women’s League means. For one thing, her voice is just recovering from yelling on-field instructions above the noise of a 10,000 strong crowd. Better news – Nicky’s newfound following. Like the primary school admirer who had a photo of Nicky blown up for show-and-tell. ‘This is my new hero … and she’s fast,’ said the young girl.

Nicky was once that bright-eyed youngster. ‘My parents were both footy mad. Mum, Collingwood, Dad, Essendon,’ she says. ‘I’d study the record and could tell the boys at school which player wore what number’.

‘We played football in the backyard. It was me and dad against my two brothers,’ says Nicky. On family holidays, a footy and bat and ball would be packed, coming out when the car stopped for breaks.

Nicky lived for sport. ‘Whatever I’d put my mind to, I’d do it,’ she says. ‘Netball was a huge part of my life … and basketball’. Finishing a game of netball then scrambling to another court for the start of basketball, part of the weekend fun.

She was a consistent athlete. ‘I promise you, I’ve never stood out. But, I’ve worked hard,’ says Nicky. ‘For me, I love team sports … whether you win or lose, you have the camaraderie’.

In high school, following her brothers’ lead, she veered into cricket. And continued to hone her skills while completing a Diploma in Health Science at university where she graduated as a remedial massage therapist. Eventually, Nicky would represent both Victoria and Australia. And in 2007, was part of the winning team at the Women’s Indoor Cricket World Cup in Bristol, England.

‘I didn’t know much about women’s footy at all,’ says Nicky. She was approached by a friend’s father who coached Melton Central Women’s Football Club. He was short of players. Nicky obliged.

2006 was the humble beginning of what would become a stellar football career. ‘I’d train two hours for indoor cricket and rush off to play footy,’ says Nicky whose only thought was that it was ‘cool’ to play the game she’d loved since childhood.

The on-field contact never bothered her. She laughs when I pose the question. ‘I always try to be quicker, so I don’t get hit,’ says

Nicky. When she does get bumped or tackled it actually spurs her on. ‘It’s rough, but that’s the adrenalin of it … the next day is harder ‘cause you’re stiff’.

Nicky was still playing cricket when she was invited to tryout at leading women’s club, Darebin Falcons. Approaching thirty years of age, it was her last chance to play football at an elite level, given its physical demands. She dived in, even though it meant letting go of cricket. ‘I stepped into the premier team straight away,’ says Nicky. ‘The club was amazing. I instantly walked into a family feel’. A close-knit culture focused on improvement suited Nicky. They won four premierships in a row. Nicky was now 33 years-old.

She probably wouldn’t be playing in today’s women’s competition if the AFL Commission hadn’t brought their plans forward three years. Nicky was chosen by the Bulldogs in the 2016 draft – the only clue – a text by a Doggies’ list manager with congratulations on her grand final performance. 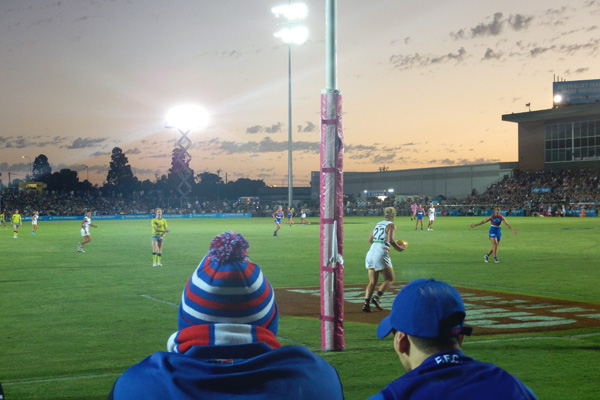 It would be a mistake to think success came easy. Nicky’s had her fair share of disappointments: separation during adolescence of her parents, sitting out the Melbourne/Bulldogs exhibition games, breakup of close relationships and injury setbacks. But Nicky brims with the resilience that top athletes are known for: ‘You’re not always up. Life throws you a curve-ball … it’s how you deal with it that makes you the person you are. You’ve got to learn from whatever has happened’.

Family has been a strong influence. She admires her parents who have remained steadfast despite going separate ways. Mother and father were sitting beside Nicky at the flashy NAB-sponsored event to hear their daughter’s name announced as Bulldogs’ number ten draft pick.

Mere superstition maybe, but Nicky’s game day routine is set in concrete. There’s a session with one client. And a hug from mum. Around 4.30 pm, it’s a chicken and avocado focaccia for dinner, then off to the ground with a few other players. After a massage from trainers, Nicky will have her joints and limbs strapped. As the opening bounce approaches, it’s time to go through plays in her mind. Once Nicky’s torn through the banner and on the ground, she jumps in the air three times.

When the siren blasts around the ground, it’s game on. A lifetime has gone into this moment.