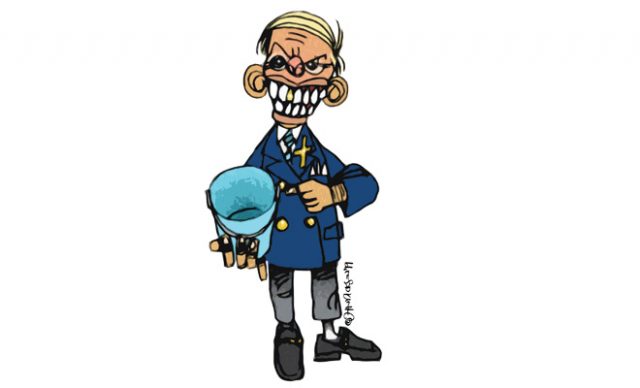 Fatso and McKeever have breached the walls of the Church of the Mighty [War Against Satan HQ!! ]. Peeking out from under the thrall of Pria Kristen’s homily, revealing to the faithful his path to Jesus, and the part played by the collected works of Enid Blyton, the pair are casing the joint. It is their ambition to relieve the church of its considerable easter collection. Fatso has yet to notice, but McKeever is showing worrying signs of finding to his taste the belief gymnastics of this clappy cult.

Meanwhile, Kristen’s employer, busy grifter and crooked overseer of the Church of the Mighty [War Against Satan HQ!!], Brother Jimmy Masters is sooking in his well-appointed retreat at the rear of his flimflam temple. He is fretting that his affaire de coeur with secretary Rosa Flow is in four kinds of jeopardy. He is also baffled by his reserve preacher, and is struggling to decide whether Kristen is up to something, or is as he appears – an earnest sap of a believer with the purist of intentions.

[Somewhere in the future, Detective Sergeant Bryan Paterson, is eyeing these antics through his rearview mirror with a view to prosecuting someone to ‘the full reach of the law’. He just doesn’t know who. Yet.]

Brother Jimmy Masters could hear the distant din of the exalted leaking through the walls of his bunker. He had poured several fingers of a fine single malt into his slightly soiled coffee cup embellished with the slogan ‘Take tea with JC’, and drained it in one gulp. The warmth of this precise libation spread across his chest and through his limbs, alleviating the insistent doubts that had him feotal on his rare Victorian fainting couch. He felt no qualms that his followers had paid $25,000 for this ‘gift’. That it now had become a platform for the exploration of extra-curricular possibilities with his complicit secretary, allowed Masters a pursed-lip snort.

The tidal wash of praise was ebbing and flowing in the time-honoured modalities of the call and response favoured by the low-think, high-return evangeliser. Brother Jimmy recognised the rhythms as those his own pseudo-religio-babble incited and the fear that Pria Kristen’s proselytisings might be eclipsing his own success, resurfaced. A substantial belt of scotch soon put that errant thought into perspective.

He pulled out his phone and speed dialled his secretary, Rosa Flow. The call went straight to her message bank. The message he contemplated leaving sounded too whiney in his head, so he hung up.

Inside the Church of the Mighty [War Against Satan HQ!! ], Fatso caught a glimpse of McKeever’s dance of joy out of the corner of his eye. He was rising and falling from his stolen wheelchair in time to Kristen’s preachy rhythms, waving his fat hands above his head on the up, and banging them hard against his thighs on the down. Fatso thought he was laying it on a bit thick.

‘Ease up on da boing bouncey boy,’ he sent out on his tortured Irish brogue, ‘dere’s a bit too much flounce in dat.’

Fatso had asked McKeever to provide a distraction while he set about ‘casing da joint’, but now thought that the pew renters might find McKeever’s spasms more of an attraction, allowing them, at a later date, to easily identify the pair. Fatso, of course, was wrong about this as the supplicants didn’t give a fine rat’s about McKeever’s eruptions, they being wholly absorbed by their own communings with bespoke deities.

The service was coming to an end and Fatso still needed to follow the path of the blue buckets of cash. At the end of every lap, the rattley bins were emptied into a large metal case stage right and stacked ready for another circuit.

Preacher Kristen whipped the house band, The Lord’s Bop, into the straight, igniting a few more choruses of Those Who Give are Those Who Get, and cueing the white-shirted attendants to deal out the buckets one final time.

It was time for McKeever to be blessed with the divine gift of being able to walk again.

Slightly tipsy, slightly off balance, Brother Jimmy Masters knew that a review of the fruits of his labours always settled him. A button beneath his desk slid a wall panel aside revealing a concrete-lined vault. Snuggled into its darkest corner were a stack of matt black steel lockers. So juicily black were they that they absorbed any careless light that might drift within their purview, allowing them to disappear to all but the most discerning of viewers. The top locker was quickly breached with keys Masters found on a hook behind an effigy of Jesus attached to the back wall. Inexplicably, Jesus was dressed in jeans and a tee shirt, his left hand flippin’ the devil-horn sign for rock ‘n roll. His tee shirt told the viewer, ‘I am the rock’.

There is something soothing about fondling stacks of $100 bills. Each carefully wrapped and branded [Church of the Mighty (War Against Satan HQ!!)] brick weighed in at $10k – and there were lots of them. In fact, each locker contained exactly 25 bricks and there were 11 lockers. Do the maths.

Again, he thumbed his phone. Again, Rosa’s dulcet tones urged him to leave a message. Again, he hung up.

Not since his last incarnation as Colonel Steve Roper, who had offered the discerning public the opportunity to purchase 100,000 containers of Air-From-The-Moon for just $19.99 [or two for $29.99 while stocks last!], had he enjoyed such potential fiscal success. A cold chill looping his spinal cord reminded him of the downside of that venture.

Two large gentlemen had introduced themselves as twin brothers, Brick and Crowbar Blunt. Brick and Crowbar, swapping sentence for sentence, revealed that they were cognisant of his generous sharing of the moon’s atmosphere. As committed conservationists, they thought it better they become his partners, rather than separately exploit that satellite’s resources to extinction. They also said they would refrain from returning him to the primordial ooze if he would agree to a ‘mutually beneficial arrangement’. The deployment of their expertise, and related expenses, meant they would take 90% of the profits. Which they did.

It turned out that the medals Colonel Roper displayed so ostentatiously on his chest were not for bravery.

Rosa Flow kicked off her shoes, poured an elaborate slosh of gin, added the correct amount of gently sweet, crisply quinined and tightly carbonated tonic water, and took in the view from her 15th floor apartment’s generous deck. Smiling, she reviewed the events of the day. The two ‘recents’ on her phone confirmed that she had Masters delicately poised. Her only concern was his apparent unease with the dimly lit Pria Kirsten. This would have to be attended to.

[From the inhouse CCTV recorded on the day in question at the Church of the Mighty [War Against Satan HQ!!], Detective Sergeant Bryan Paterson asked for a particular section to be played over and over again. Then in slow motion. Then backwards. He was mesmerised by the convulsions of the large man under the conical hat and his sporadic attempts to leave his wheelchair. He willed him on. Tears flowed from Paterson’s bloodshot eyes when this man with the preposterously large hands appeared to walk towards the stage…].

For those who arrived late and for
some reason wish to try and make
sense of these scratchings, the first
three instalments can be found at
thewestsider.com.au/tag/idlefoot/
Leave a note. Ask a question.
Warning: it may not help.