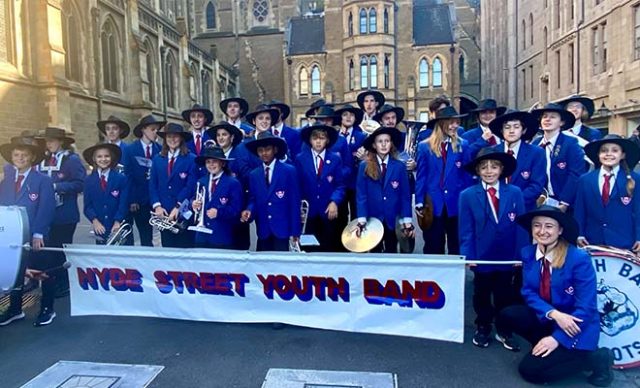 The young people of the Hyde Street Youth Band have come out of the lockdown period, bolder, brassier, happier to play together and for the community than ever before! Through lockdowns the band made the best of it with weekly Zoom rehearsals and online masterclasses. ABC Radio’s Coodabeens had the Band on playing the Western Bulldogs theme song as we couldn’t march in the Grand Final Parade on the day.

Hyde Street Youth Band Inc is a not-for-profit Association which is supported by the City of Maribyrnong and prides itself on making brass music accessible to all young people. It is one of the very few community-based bands in Melbourne providing opportunities to young people at extremely low cost. And new members don’t need to worry about purchasing an instrument, as HSYB provides instruments to all its members on a loan basis.

The Band has provided musical opportunities for almost one hundred years to young brass and percussion players in the West, having first formed in 1928. The Band started its life as the Hyde Street State School Band and has been an integral part of the local community ever since. Just this year the band started a new era at the Raleigh Rd Activities Centre, 54 Raleigh Rd, Maribyrnong, thanks to the efforts of the Maribyrnong City Council in finding us a new home. The band room is shared with the Footscray-Yarraville City Band, Western Brass, and the Footscray-Yarraville City Percussion Academy.

Hyde Street Youth Band offers three ensembles for various experience levels, The Youth Band is led by the experienced, and award winning Phillipa Edwards, with many years of dedication to Brass music, particularly developing the young musicians of the future. With young musicians up to the age of 21, the Youth Band regularly participates in state and national championships, annual events such as the ANZAC Day, Moomba and the AFL Grand Final Parade, Carols in Yarraville Gardens, local festivals, and events.

To develop their skills our youngest and least experienced members, some as young as 5, start in our nurturing Training Band, led by local music teacher and experienced brass player, Caitlin Taylor. Once they’ve developed their musical skills and confidence, Junior Band awaits, with Musical Director, Andrew Wilson, who has held a cornet in his hands since age 7. In Junior Band, members further develop their confidence and skills, also performing at State Championships and regional Eisteddfods.

Hyde Street Band and Percussion Academy members enjoy music camps at least twice a year and are very much looking forward to playing at the Alpine Brass Festival in June at Bright. Some of our young musicians have also recently had the opportunity to try their hands at conducting through workshops run by Jemima Bunn from the Australian Band and Orchestra Directors Association (ABODA).

A recent highlight was a visit from Lyrebird Brass, comprised of brass musicians from Melbourne Symphony Orchestra and the Melbourne Conservatorium. They performed works of prominent Australian composers and showed our young musicians that, if they keep practicing, the world of music and possibility opens for them.

Another major highlight this year is that the Hyde Street Youth Band, thanks to the Triennial Arts Grant from Maribyrnong City Council, has commissioned Australian Composer, Andrew Batterham to write an original composition. Our young musicians are excited to share their ideas about how this might sound and how the music may reflect our local community and the energy of youth.

Many of our young musicians have also joined the Victorian State Youth Brass Band with 50 other young people from 25 different bands throughout the State and are looking forward to camps, performance opportunities and a Tasmanian Tour in September.

Please head over to the band’s website at hsyb.org.au or find them on Facebook to hear some performances and learn more about the Musical Directors, and upcoming events.

Hyde Street Youth Band are always looking for new members, whether you have not played an instrument before, have just started learning, or are experienced. The band would love for you to be involved, and you can join any time of the year! One of life’s greatest gifts is the gift of music.

Expressions of interest can be lodged via the Contacts Us page of the web site or by emailing the band president at president@hsyb.org.au.

Visit the band’s website or facebook page to hear some performances and learn more about the Musical Directors, and upcoming events. 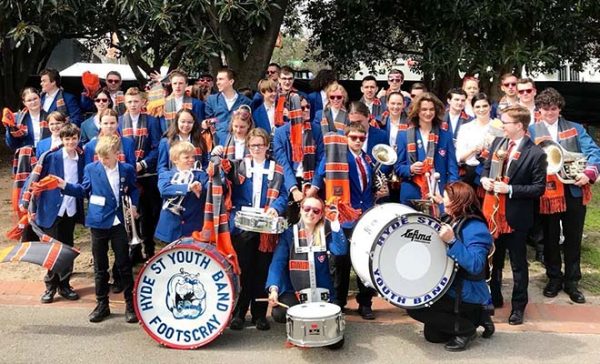