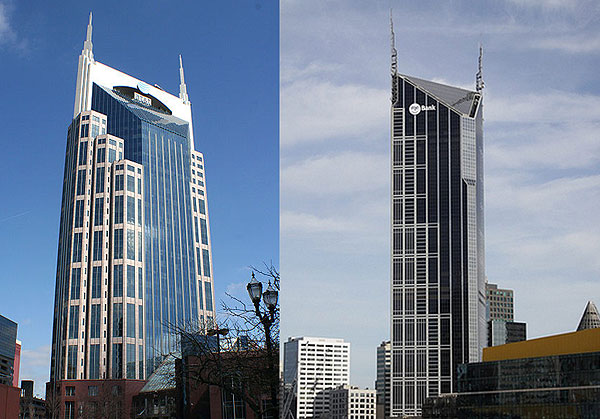 Did you know the Melbourne Central Office Tower known as the ‘Batman building’  is not unique? In fact, the AT&T building in Nashville, Tennessee is an eerily similar design and shape of building.

The Melbourne Central Office Tower comprises 57 levels and is ranked the 7th tallest  building in Melbourne – also ranked the 10th tallest building within Australia. It was designed by a Japanese architect/designer named Kisho Kurokawa and completed between 1986 and 1991. ME Bank and Allianz have both taken up building signage rights.

The AT&T building, which is also known as the ‘Batman building’ featres a structure also designed as an office tower to hold a capacity of 2,000 workers. It is the tallest building in the state of Memphis.

And that nickname? In 2009 French online business journal ‘Le Journal du Net’ dubbed the AT&T building ‘La Bat Tower’, one of the most original office buildings in the world, even if it does have a twin.

So whether you’re in Nashville, Tennessee or Melbourne, Victoria, watchout – Batman might still save you from the night.