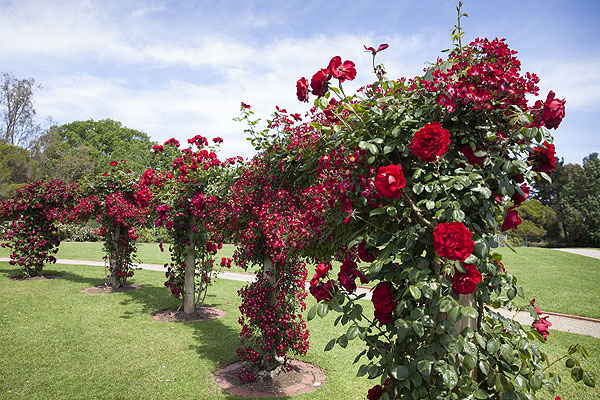 The roses are in full bloom this time of year.

It is November, the tail end of spring. And this garden is full of life.  The bees dance between the petals, darting from flower to flower, whilst birds sit in the trees and sing their summer song. It is warm, the sky is clear and blue, and the air is sweet with the scent of over 5000 roses.

Visitors roam the paths, taking in the sight and smell of the many varieties.

And the colour here is vibrant.

The carefully cultivated flowerbeds sit amongst well-kept lawns.
The paths are lined with draping roses, clinging to posts and frames like curtains on a window.  Bushes stand tall either side of the numerous walkways, gazebos meeting at their middle, the roses carefully pruned and trimmed. Beautiful roses lovingly tended to, all by an army of volunteers.

This is the Victoria State Rose Garden. And it is amazing.

Officially opened in 1986 after a decade of planning and work, the rose garden has been a labor of love for many volunteers over the years. In fact we owe its continued existence to these wonderful people. For after its initial opening, very little care was given to the garden. In 1992 it was in a sorry state, no work had been done for some time and it was in serious disarray. Roses were unkempt and stunted, the lawns overgrown and out of control.

The threat of a bulldozer loomed over this wonderful place, and it very nearly happened.

With no organization willing to take on the burden, Mr Jim Priestly started a petition to save it and gather a group to clean up and maintain the grounds. That group became the Victoria State Rose Garden Supporters Group. Originally numbering 50 volunteers, the figure has now grown to over 100, with several of that initial group still helping today.

They’ve contributed to the welfare of the rose garden and helped it endure many threats over the decades. In 2003 it won the ‘Garden of Excellence’ title from the World Federation of Roses Society, the first garden outside of Europe to do so. Between them, the volunteers put in around 9000 hours a year to produce roses that so many admire and enjoy.

They should be applauded for their efforts, for their selfless contribution and hard work. Because the rose garden is a truly beautiful place.  And it costs nothing more than a gold coin donation to enter, and the roses are in full bloom this time of year. 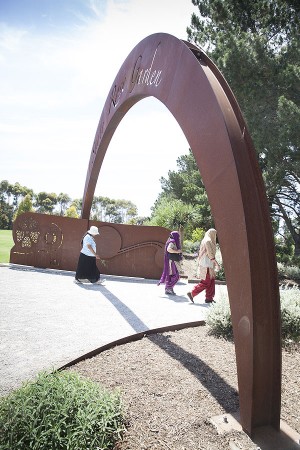