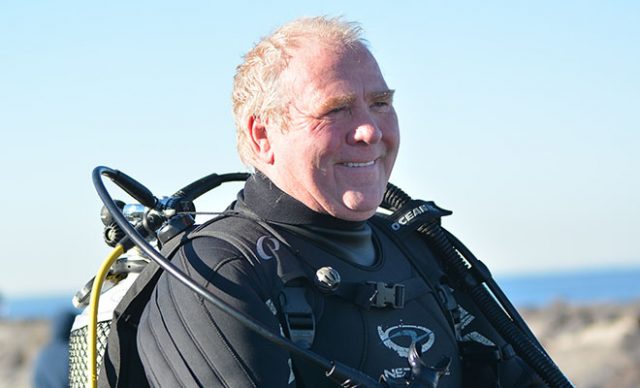 On a fresh, still Saturday morning, the temperature seems permanently stuck in single digits. Although, judging by the peak hour crush at Kiosk d’Asporto at 9.30am, news of the autumn chill has yet to reach Williamstown Beach.

The coffee queue resembles a conga line. Williamstown Swimming and Life Saving Club members mill about on the clubhouse lawn. A dedicated community group have recycling bins lined up for a litter roundup. And good luck negotiating the promenade without being licked by a dog, or dodging a child on a mad dash to the sand. The bustle even finds its way into the sea as swimmer after intrepid swimmer brave water so cold that it stings.
Meanwhile, two scuba divers lumber from the shallows to shore. One is burdened by a heavy bag.

Mark Clarke and Edward Nuri have just spent an hour floating weightlessly below the surface picking up rubbish from the sea floor. 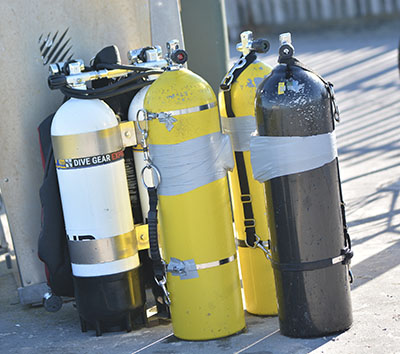 Today’s clean-up mission started earlier at 7.30 am, in the car park as Mark and Ed climb into semi dry wet-suits, and hoist on scuba tanks that would test even the strongest spine. On a morning this bracing, a pep talk accompanies the mandatory dive briefing. The underwater computer that measures the depth and time of each dive is set. A compass to navigate the return home strapped to the arm. Gear check, and with fins in hand, it’s time to step into the sea.

Mark grew up in Newport; Ed in Footscray. The two snorkelled at Williamstown Beach as boys; although at the time, they were unknown to each other. Mark became an actor and musician, working alongside Hollywood stars, and in famous Australian bands as a bass player, at the peak of his career. After gigs in the entertainment industry petered out, Mark took up a position in the Department of Justice as a law enforcement officer. Ed was employed in the transport industry until a serious car accident put an end to his full-time working life. Both learned to scuba decades ago. They met diving — forging a longstanding friendship as trusted dive buddies.

Mark and Ed began collecting rubbish while diving after being alarmed at what they saw strewn underwater. It was the start of an environmental project that is now nine years in the making. Mark looks out to sea and points into the distance. ‘I reckon we’ve scoured 100 acres of sea floor,’ he says, his face still a shade of pink from the cold water. 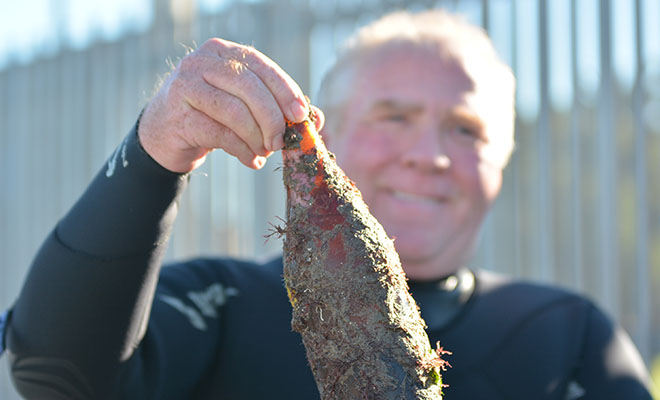 No expedition ends without a catch to be proud of: broken bottles, sinkers, fishing line, plastic … you name it. Today, Mark and Ed fill a shopping bag to the brim. And yes, the motley collection includes a container that held the remnants of a cremated body — a not uncommon find. We may cast a bag of a loved one’s remains seaward with a prayer, only for it to linger on the sea floor. That is, until Mark and Ed swim by, release the ashes and dispose of the harmful plastic.

Who knows how much garbage the two eco-warriors have removed from the West’s favourite beach? The math sure is interesting. Four kilos or more collected most weeks for nine years. That’s equivalent to the weight of a small car in junk. And enough to fill a large skip.

Thankfully, there’s a growing awareness of the problem caused by pollution in our oceans and waterways. The CSIRO estimates that world-wide, millions of tonnes of plastic finds its way into the ocean yearly, turning up in fish as micro plastic.

Which makes it all the more comforting to hear that the results of Mark and Ed’s clean-up project are now visible on a dive. ‘Williamstown is the cleanest part of the Bay,’ Mark says, explaining that at well known bayside beaches in the east, you’ll find car batteries and shopping trolleys dumped in the water.

Unfortunately, without funding or sponsorship, rising costs present a challenge to the two pensioners. ‘Over the past year, the charge to fill a tank has skyrocketed from four to nearly twenty dollars,’ says Mark. As well, there’s the financial burden of equipment maintenance; a new wet-suit is priced around $1,500. 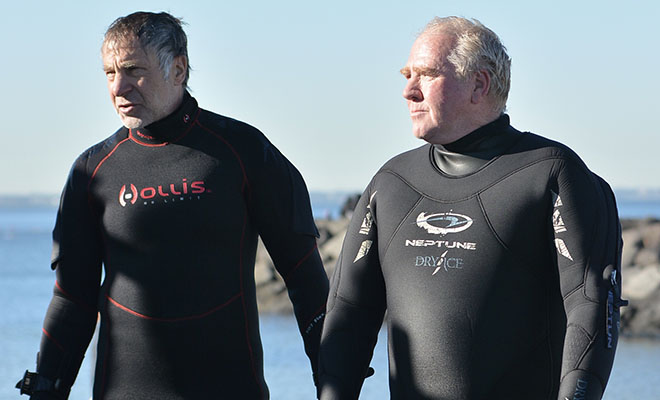 Not that this will stop these two sons of the West. They get a kick out of serving the community, and hope their example inspires others to care for our beach environment. Not to mention, the enjoyment their adventure-packed pastime provides.

‘Williamstown Beach is regarded as a scuba training ground, mainly for its easy access to the water, but is overlooked as a diving destination,’ says Mark, still bursting with energy from the dive. ‘Yet, one hundred metres or so from the shore, down about six metres, an underwater garden exists — full of colourful marine life. It’s like walking into the grounds of Werribee Mansion.’

The stories continue; Mark and Ed could tell dive tales for hours. Being surrounded by a swirling school of fish. Discovering that prawns are now thriving in Williamstown waters. But perhaps none will ever top that ‘moment’ with a dolphin. ‘There’s nothing like experiencing one of these creatures by your side,’ begins Mark. ‘It swam around to face me, looking deeply into my eyes. I swear … it felt like we were communicating. Then it seemed to laugh, before quickly turning and swimming away.’