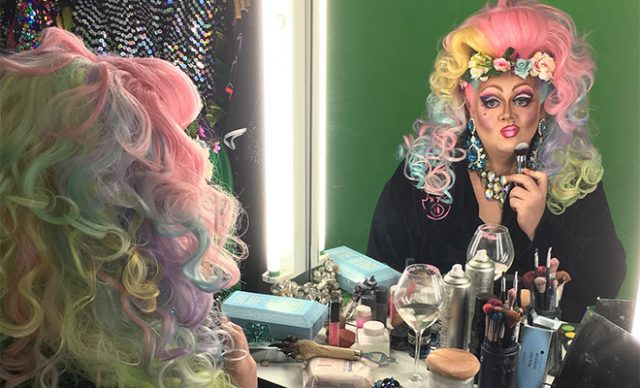 Think you’ve exhausted all entertainment options during COVID lockdown? Think again. Local drag queen Abril LaTrene aka “the big blue behemoth with a belly full of booze” has just launched a YouTube channel, and it’s already proving to be a bobby dazzler.

The YouTube series is a creative collaboration between westside locals Abril and digital content producer Jason MacKenzie. Jason first met Abril when she hosted drag bingo at Pride of Our Footscray. “I thought she was hilarious and awesome,” remembers Jason. “Whenever I saw Abril perform, it just made me so happy and more people in the world just needed to see her.”

Abril LaTrene kicks off the series by introducing the world to her obsession with American mac and cheese. When Abril first mentioned this idea to Jason, she recalls “he looked at me like “what are you talking about, you dizzy bitch.”

On a business trip to Utah last January, Abril filled up a suitcase with mac and cheese purchased from Walmart. Across several videos, she “cooks them, tastes them, rates them” and reviews the Aussie mac and cheese products, too. Served up with Miss LaTrene’s cracker one liners and bawdy humour, it is profoundly good fun.

Making the series has been a way to keep the creative juices flowing in a difficult time in the arts industry. Both Jason and Abril note that lots of potential productions and gigs have shut down this year, yet the YouTube series has been an opportunity to “diversify and do something different.”

“[The series] is a way to continue to stay engaged, to continue to bring a sense of joy and lightness to the world we are currently living in,” Abril says. “We are getting messages from people saying ‘this is exactly what I need in lockdown.’”

Jason agrees: “It’s been so much fun. I think people really need that right now.”

There are exciting episodes in the works in the future, including sit-down interviews with interesting characters. Stay tuned for new episodes by subscribing “Abril LaTrene” on Youtube.