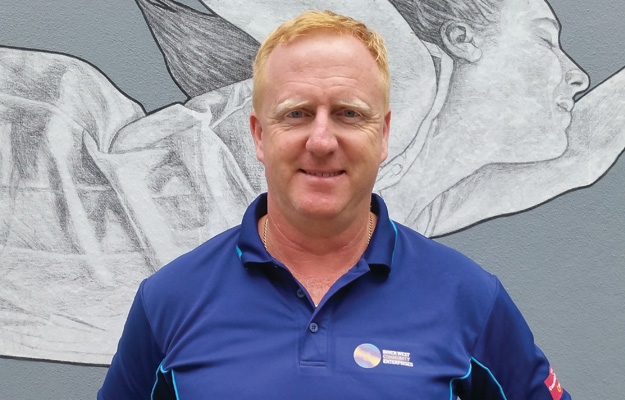 If you’ve ever been to any kind of event in the inner west – a festival, fundraiser or fair, you’ve probably seen Andy there, setting up, helping out, talking to people, packing up. Community is his middle name, and he’s proudly involved in ventures like Inner West Community Enterprises, The Westsider, Mad Youth and the Footscray Community Bike Shed.

He came to Melbourne in 2000, landed in Yarraville and never left the inner west.

“I came to an all night party and woke up and went to what was then Fidama’s for Sunday breakfast. I remember clearly looking up the street and thinking ‘this place is amazing’. By Thursday I’d found a house share and moved in that weekend. Just loved it.”

But Andy originally came from England in 1989 to Australia following a girl he’d met. Six weeks later he was on a plane (alone). At least he can say he came here for the greatest reason – love – even if it didn’t quite work out.

“I only knew two people who’d been to Australia, one said go up to Darwin to work because the money is good, and the other said go down to Sydney for the parties. From that I somehow thought they were like hill and valley – up and down. I had this grand plan to work up in Darwin during the day and go down to Sydney to party at night. How naive I was.”

For a time, Andy plied his trade as a professional soccer player in Adelaide during the pre-A League days – until the team ran out of money in 1994. Eventually he met his wife Karen at a singles night at the old Gillian’s in Yarraville (most recently the  Jasmine Inn). They are now married with three kids. The connection with the area was strengthened with his Seddon Community Bank involvement, from which he naturally mixes with community groups and clubs. Plus eight years on the school council at Footscray West Primary School. You’re probably getting the picture by now.

But what about changes in the area during his time here?

“The biggest changes I can see, when I arrived there were lots of young singles moving in, renovating, now it’s more family orientated, with lots of teenagers and young adults starting to make their mark, bringing a positive change to the feel of the place.”

For small joys each day, he looks no further than the cup in front of him.

“I just love getting coffee. There’s lots of choice, I like Post Industrial Design cafe in WeFo. I like the feel of cafes, especially when they know you, you can have a meaningful conversation there. It’s where you make friendships, not just buy coffee.”

And his favourite hangouts?

“Back Alley Sallys, Miss An’am and Alfa in Seddon, and I have a fond memory of Java in Yarraville,  of putting our now 16 year old on the table in a bassinet as a baby. My office was above the old bank and Java’s wi-fi just reached. It was like I worked out of the cafe! At night I like Charles and Gamon, and Harley and Rose in West Footscray is a neat little spot too.”

Next time you bump into Andy, if you have a project, club or program, ask how the Seddon Community Pitch can help with funding. If you’re a business that wants to help the community, ask him how you can support the Pitch Night coming up in May.