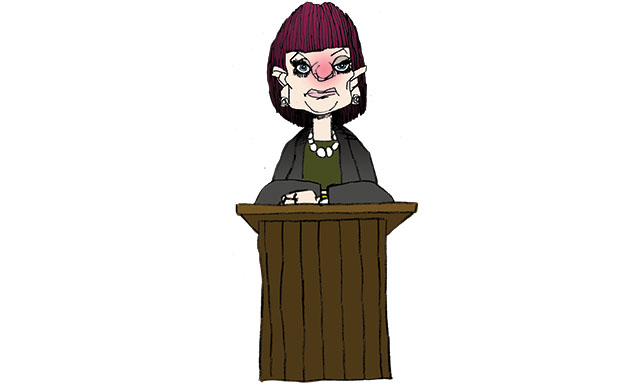 I have a little left to say. And I will say it. It’s the right thing to do. What happens next is not up to me. My fate will be decided by others, as it should be. I am sixteen years old. An innocent victim of my mother’s indifference to laws that conspire to prevent her from enriching herself, according to the tenets of her own philosophy. She simply believed that products offered to assuage the burdens of life are there for the taking. So she took them.

My four sisters, Chrissie, Rob, Myra, Lindy-Lou and I knew no other way. We learned how to pilfer anything from a modest kitchen utensil to, on one memorable occasion, a Ferrari GTC4 Luson [list price $US298,000], which we subsequently used as a family runabout until it began to attract too much attention. That 6.3 litre naturally aspirated V12 donk can sure wake up the neighbours.

Of course, any objective observer would say that this business plan had a limited life and was doomed to unravel. The trick was to be an absent presence when this occurred. And so it came to pass.

A swifter ending was postponed though when Nitro O’Nitro, boss cocky of local biker outfit, Maggotfeast, and his offsider, emigré Sligo de Putin, struck up a mutually beneficial arrangement with mum, ensuring security for her retail arm, the Warehouse of Hope. There were other synchronicities specifically between mum and Mr O’Nitro [as she insisted on calling him] that were beyond my callow understandings.  My talent for numbers and identifying beneficial financial instruments that kept governments and law enforcement at bay, only allowed me partially into the tent.

Then dad turned up. Our estranged father, Maurice ’Shortcut’ Shevel, had disappeared 13 years ago. When asked, mum loved to quote Banjo, ‘…Shortcut’s gone to Queensland droving, and we don’t know where he are’. Dad’s attempt to put the arm on mum backfired and he ended up cable-tied astride a chair in the cold room of the HQ of Sligo de Putin’s Go in Peace ‘departure’ franchise – his successful chain of funeral parlours. As a punishment, highly-regarded prison tattoo artist, Fitty McTavish was engaged to illustrate dad’s entire body with a record of all the misdemeanours that mum could recall he had visited upon unsuspecting citizens.

Thanks to the amateur hate-sleuthing of Barnett Ryder and his dimwitted brother, Plate, their bent ‘spymaster’ Detective Sergeant Bryce Appleby has unleashed the full power of law-enforcement on our unsuspecting gathering.

In the cold room that day were my four sisters, Chrissie, Rob, Myra and Lindy-Lou, Mr Nitro O’ Nitro, Sligo de Putin, Fitty McTavish was there, as were two Maggotfeast henchmen – Sergeant-at-arms, Gavrilo ‘The Crowbar’ Nero and Tailgunner, ‘Hot Fat Vat’ McKinnon – mum, dad and me.

Then the police banged on the door.

Everyone went quiet. Mum whispered in my ear: ‘Sounds wrong. Go and bolt the front door and check the video cams for me.’ I left them in the cold room and slid the door closed behind me.

The banging continued, now with added ploddy charge: ‘Police! Open the door!’ I slid the bolt to and checked the monitors. Yep. Half-a-dozen wallopers, one with a battering ram. Now what? I returned to the cold room as ram man began his work. I had minutes before the whole edifice crumbled.

The cold room was empty. Everyone had vanished. Just like the old days, they had left me to it. My only hope was one of four empty coffins on trestles. I chose the second one and pulled the lid over my head. Nobody likes looking in coffins. Especially in the cold room of a funeral parlour.

Coppers make a lot of noise when undertaking a raid. Probably because they are terrified at what might be awaiting them. A cold room with stainless steel decor, trays of curious surgical tools and a quartet of coffins, serves only to ramp up the anxiety. Add to this the singular experience of my bursting from a coffin gasping for air as the suffocation and claustrophobia lost their attraction. Two of the six began screaming, one bolted and another fainted. Detective Sergeant Bryce Appleby slapped the two screamers. Hard. The fainter came around with the insistent wafting of Appleby’s renowned stinkfoot beneath his nose and the only other plod not affected by my sudden intervention went in search of the bolter.

‘Michael John Shevel,’ Appleby accused through bared teeth, ‘you are under arrest for crimes various. You do not have to say anything etc etc etc….’.

And that, your worship is how I arrived here before you today. I throw myself on your mercy.

Margaret Plangent SM was exhausted. Her husband Duncan had insisted she ride in the back of the family Toyota Alphard 3.5L V6 Executive Lounge. His bagpipes were strapped into the front seat. It had been a considerable struggle to get them balanced there and he was quite pleased with the outcome. He was not about to shift them for her. Tediously, he began to tell her why. Listening to his convoluted explanation had emptied her out, so she remained silent throughout the morning commute.

‘Can you stop here?’ she asked two blocks from the miserable 1970s edifice that housed her magistrate’s court. ‘I need cigarettes’.

‘Do you, though?’ Duncan smarmed through his indifferent Scottish teeth, slowing the Alphard to a halt well past the kiosk run by Margaret’s dealer.

Maybe when the kids have gone, she promised herself as she sidled up to the kiosk where Carney Mullet already had the golden pack of darts waiting atop the three newspapers Margaret took each day. She couldn’t get the pack opened fast enough.

‘Duncan still being a shit, your worship?’ offered Carney’s wry grin as an opening gambit to the ten minutes of natter the two women enjoyed most mornings.

‘Yup,’ exhaled Margaret, firing up the first dooz of the day as she settled in for a bit of a therapeutic data dump with her friend before embarking on the gruelling tasks that lay ahead.

The walk to the courthouse was as uneventful as it was pleasurable. All the niggles and irritants of her busy life had been herded into a back paddock and left to fend for themselves. Then she saw the Alphard pull up and disgorge the four pupils that Duncan had warned her he would be bringing from the exclusive girls’ school where he taught. They were to witness ‘justice in the round’. She felt a tightening as she shortened her steps to allow the noisy gaggle to enter the building ahead of her.

Margaret’s windowless office seemed particularly airless. The remnants of yesterday’s lunch still protruded from an [again] unemptied wastepaper basket. The tumble of books that still spilled from the bookcase behind her desk bore grim witness to her encounter with prosecutor Sergeant Brian Allenby the day before. He had entered the room as he always did, a louche, smug, lounge lizard burdened with classic good looks. He had closed the door behind him. His transparent purpose was to charm Margaret Plangent SM into an encounter that would allow her the benefit of his considerable libidinous skill.

Margaret leapt to her feet pushing her chair into the bookcase and endured the rain of law books as she delivered a lecture on the professional ethics of the judiciary and the lawful responsibilities of officers of the court to the irritating, empty-eyed grinner challenging her. Even as she spoke she recognised that this entitled ferret would punish her for not recognising his considerable prowess by disrupting her court with trying acts of insubordination – within the letter of the law but outside its spirit.

This depressing knowledge was reinforced when he turned on his heel, thanked ‘your Highness’ and left the room.

Today’s knock at the door revealed her tipstaff. Upright, as always, perfectly coiffed, as usual, typically dressed from head to foot in matt blacks, Barton Crock slid the day’s list of cases on to her desk.

‘Three bikers up for a bit of general mayhem and some routine drug-fuelled barbarity, defended by you-know-who. But first, a curious drifter up for hunting out five-finger discounts. He has a fool for a lawyer – himself.’

The ‘you-know-who’ Crock referred to was the go-to shyster favoured by the criminal classes. The diminutive Sebastian ’Shylock’ Lennon was as renowned for his encyclopaedic knowledge of legal escape routes as he was for championing the oft-spurned lavender double-breasted suit boasting purple velvet lapels and flared trousers. At the very least, he would be entertaining.

‘All rise’, insisted Barton Crock demonstrating this simple task to the court as the gathered awaited the impending arrival of Margaret Plangent SM. She entered, took her seat overlooking the court and waved everybody to follow suit.  Margaret couldn’t help but notice her husband’s voluble, impenetrable Scottish accent commentating on the proceedings for the benefit of his four charges. She glared at him. He elaborately pressed an index finger to his lips, waved an acknowledgement and continued with passive aggressive whispers.

Towards the rear of the court, Margaret took comfort in the appearance of ‘her girls’. Four members of the Southern Suburbs Detective Writers Agency were opening notebooks and sharpening pencils in anticipation of the upcoming proceedings as inspiring a series of novels that would never be written. Or, if written, never published.

Herded into the holding pen were the three fully-inked bikers, open-legged slouching, do-rags made from pirate flags knotted around unruly greasy dreadlocks, reflector sunglasses on battered faces with three-part sneers that demanded: ‘…you lookin’ at me?’ With them, ’Shylock’ Lennon was parked on the edge of his seat, slim blue-white hands trying to contain his absurdly lavender bouncing legs.

Prosecutor, Sergeant Brian Allenby had stayed on his feet. He addressed the tall slight man in the witness box.

‘Michael John Shevel, you are charged with 23 counts of theft. How do you plead?’

Shevel was glancing around the courtroom. He looked as though he was gathering strength from those around him.

‘I am guilty, your munificence,’ he told Margaret Plangent SM.

Oily Allenby asked him if he had could offer any explanation for his behaviour. Shevel said he had comprehensive and myriad reasons for his antics. Sensing a windy irritant for the beak who had only yesterday eschewed his advances, Allenby recognised revenge when he saw it.

‘Well, that’s all right then. I have no objection to the defendant’s elucidation, your honour,’ he graciously allowed in anticipation of what Shevel was about to unload and then immediately sat down to enjoy the spectacle he had encouraged.

‘I was nine years old before I discovered that taking clothing from a haberdasher should be matched with a financial transaction of some kind.

Until then, my mother had selected items from the store’s racks for me and my sisters, dressed us in layers beneath the clothes we wore into the emporium, created a diversion, then quickly ushered us out…’..

Not to be continued…