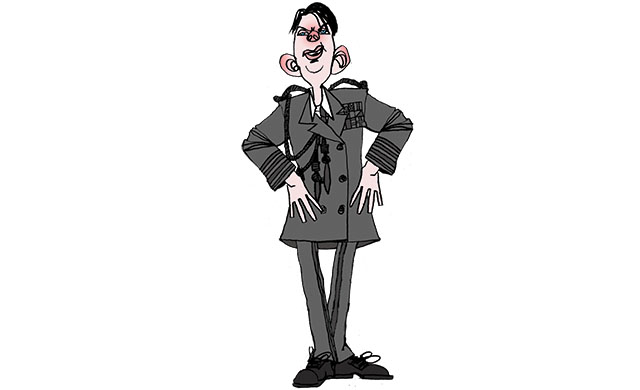 This is context. I have to tell you all of this so you will understand why I stand before you today. I didn’t arrive here fully-formed. It was a process. Yeah nature, yeah nurture. But when your first encounter with the world is one on the distal side of the law, then that’s your reality. Especially if you are guided to it by the one person you trust utterly, your mother. What hope, what hope?

And so it was, along with my four sisters, Chrissie, Rob, Myra and Lindy-Lou, that I was shanghaied into the family business. Some business. A lot of pulpits would quake with the full dodge of what we did. Would I change it if I had another crack? Probably not the time and place to ruminate on that.

We stole stuff. All sorts. Want a Rolex? Sure. Half price. How about a nice set of saucepans? Can do. 65% off, for you. That bed in Myer’s front window? Give us a couple of days. Anything and everything found its way to the family store, the Warehouse of Hope, and was passed on at a considerable discount.

Our overheads were low. Our profit, high.

Mum’s alliance with the big kahuna of a local bikie gang, Mr Nitro O’Nitro, his offsider, Russian emigré Sligo de Putin and an assortment of very bad men, shored up any security worries we might encounter.

And so it was that a breach in our ramparts was exercising the communal imagination of this unlikely enterprise. Our father, Maurice ’Shortcut’ Shevel, had emerged from a thirteen-year, self-imposed retreat from his family, waving around threats various in the hope of alleviating mum of her wealth burden. It was another mistake in a long line of mistakes. Captured by the gang’s Sergeant-at-arms, Gavrilo ‘The Crowbar’ Nero, and Tailgunner, ‘Hot Fat Vat’ McKinnon, dad found himself cable-tied astride a chair in the cold room of the HQ of Sligo de Putin’s Go in Peace ‘departure’ franchises. This branch of his chain of funeral parlours was conveniently located next door to the Warehouse of Hope, in case it was needed.

Also in the room, master of the darker tattoo arts, Fitty MacTavish, was preparing Chisel, his favourite tattoo gun, and mixing indelible inks. For dad was to be illustrated with evidence of the crimes he has committed. This was intended to act both as a chastening for his sins and as an enduring alert to any who might encounter his fleet mouth and speedy fingers.

For mine, I wasn’t sure that it would have the desired effect. My experience of my ill-fated pater is that he doesn’t really give a fat rat’s arse about the consequences of his actions. His febrile lizard brain is too busy planning the next bout of opportunistic opprobrium to allow the past a place in his thinking.

But what would I know? I am barely sixteen years old.

Mum is listing her former husband’s wrongdoings to see which might make the cut. She begins with his penile enlargement offer. Send a $10 gift card to this PO Box and Dr Shortcut will send a guaranteed trouser enhancement. The hapless mark receives a cheap, plastic magnifying glass by return mail, value: 44 cents.

Barnett Ryder was the youngest town councillor ever to represent our humble parish. The fiscal generosity of his doting mother, Brenda, had ensured that he accumulated enough votes. Otherwise, this smug nineteen-year-old would have continued a patchy career as an ‘arch gamer and collector of rare stamps and coins’ and never be heard from outside this niche community.

Barnett was always in the company of his stepbrother, Plate. An oaf of a man, Plate was the accidental by-product of their mother’s first marriage to a rakish car salesman whose taste for alcohol and a steady regime of recreational drugs finally overwhelmed his precarious attachment to viability. Brenda’s second marriage, to a wealthy beneficiary of a substantial family trust looking for a substitute for his recently passed mother, resulted in the birth of the odious Barnett.

With the genetic failure of her first son uppermost in her mind, Brenda set about making sure her second pup would make a mark on the world. She referred to Barnett as The Prince. As did a series of teachers, parents and peers, but with a slightly different tone.

That Barnett Ryder had survived thus far can be partially sheeted home to the constant presence of his thug brother. What Plate lacked in acumen he made up with in menace. He said little. He didn’t need to. Where intimidation failed, Brenda was able to oil various wheels with her newly acquired wealth. In the unlikely event that bribery foundered, Barnett just floated above, armoured by entitlement and the conceit that he was right. Always. His mother said so.

Barnett favoured military-style costume. Not the camo of the grunt soldier, but the elaborate decoration of the officer class in full pomp – epaulettes, lanyards, faux medal ribbons, stripes on the sides of his trousers and the four sleeve rings favoured by Admirals. All these in black against black. Hidden in plain sight.

He saw no fault in trickle-down economics, provided he was controlling the trickling, and was a committed barracker for political movements that privileged the privileged. He always carried his post-it-noted copy of Sun Tzu’s The Art of War from which he quoted often and at length.

The curious economics of the Warehouse of Hope, located in his ward, had not escaped his attention. To be strictly accurate, his interest was roused when his stepbrother began sporting a high-end digital watch that he claimed cost him considerably less than the list price. ‘Bugger all’, was how he described the fare.

‘I got it from the Warehouse of Hope,’ Plate said. ’Take me there,’ said Barnett.

And that is why the pair was reconnoitering the very same purveyor of ‘Hope’ on the night when Mr Nitro O’Nitro and his merry banditti arrived to negotiate a business arrangement with mum.

Barnett was curious to know what economic theory drove this peculiar business; why products had price tags from many well-known outlets; why original prices had been scrawled out and replaced with considerable discounts; why it was open briefly for word-of-mouth customers and only late at night; why a ‘strictly cash’ business; and did it fit into his own ’trickle’ theory of wealth dispersal?

The cacophonous arrival of large men on motorcycles, the whiff of it, the fizz of danger, excited his suspicion that potential for his own enrichment might lie here somewhere. That his own survival might be at risk was something Barnett was blind to from his throne of arrogance. And it was from that lofty height that he positioned himself near mum’s office where the delicate negotiations between her and Mr Nitro O’Nitro were taking place.

Barnett overheard enough to realise the fundamentals of our theft-to-retail business plan and immediately understand its central vulnerability. It’s perverse Robin Hoodity was illegal. He then made his own mistake. He took the advice of his mentor, Sun Tzu, who told him: ‘opportunities multiply as they are seized.’

On this occasion, Mr Tzu was wrong.

In the car park at the rear of the Warehouse of Hope, a cheery Mr O’Nitro, astride his Valkyrie Fourpot 5000, leaned over the handlebars to fire up a durry as he reflected on the warm reception that he had received from mum and how that might be amplified in the days ahead. He barely noticed the curiously dressed young man approaching him.

‘That’s Barnett Ryder,’ Myra whispered to me. Our second eldest sister had been a classmate of this interloper and shared a quick biography of him with us. It was not flattering. We settled back to watch what could only become Barnett’s ruin.

Barnett began his pitch by straddling the front wheel of Mr O’Nitro’s machine. While we couldn’t hear what he was saying, his body language exuded hubris. He tapped along the handlebars. He flicked at brake cables. He adjusted rear vision mirrors. He took Mr O’Nitro’s durry out of his hand, drew on it, and blew smoke into Mr O’Nitro’s face. A curious tactic that even his own protection unit, Plate, recognised as overreach and sent him retreating to a safe distance.

Barnett must have felt Mr O’Nitro’s machine roar into life, the headlight testing the structural integrity of his ribcage, the impossibility of escape as the machine gained momentum and then the sudden halt that propelled him through the air. From where we stood, this coolly visceral reaction from Mr O’Nitro had a remarkable duality – the machine’s clamorous anger as it ignited, followed by the caged fury of its abrupt brake-squall halt, then the quiet as Barnett rotated slowly through the air to land, neatly folded, stuck fast and silent in an open rubbish bin.

Schadenfreude is great fun and I naively thought that Barnett Ryder would recognise he was at a serious disadvantage, fold his tent and disappear into the night. But hell hath no fury like an entitled little snot getting his comeuppance. Mr O’Nitro might have been the one who handed this brittle monster a shovel, but it was me who got buried in his revenge.

Meanwhile, back at Sligo’s Go in Peace coolroom, we were hypnotised by mum’s malfeasance drone as she listed dad’s numerous misdemeanours, when there was a loud banging on the door…