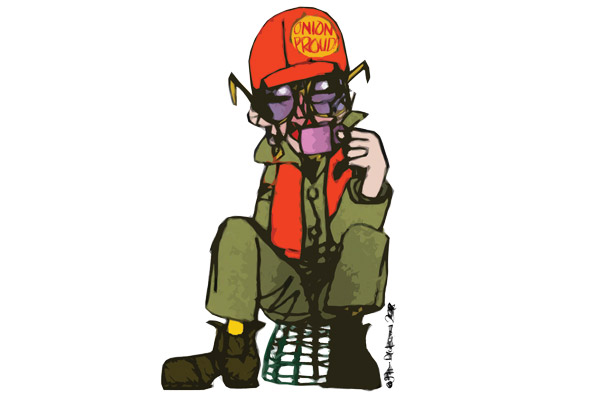 When we last met, Mandible* was enduring a kind of interrogation by discombobulation. Grace ‘Nightwatch’ Willocks, the Department of Interstitial Indices’ nocturnal genius, was treating Mandible to an insight into the workings of her considerable mind. Having allowed him an audience, which Mandible [mistakenly] thought would shed some light on why Nightwatch thought him a ‘cuckold’, she took the opportunity to let her mind off the leash and treat her captive audience to a rolling series of full-loop, fog-bound bewilderments. A kind of stupor has settled on Mandible’s prefrontal cortex, robbing him of the capacity for rational thought. Still, through the mist, he remains intrigued by the harness that he accidentally witnessed Nightwatch attaching to her upper body, when he confused a grunt of effort with an invitation to enter her office. Mount up, let’s see where this goes…

‘As Nightwatch continued to ignore my increasingly feeble attempts to return to the topic of cuckoldry, I felt my will to remain an independent thinker increasingly usurped by her ministrations. Her accent had by infinitesimal degrees shifted from that of the largely-ignored Viennese ‘mind clump’ psychobabbleist, Fritz Spitzen, to channeling Marlon Brandon’s outing as dockworker Terry Malloy in Elia Kazan’s seminal 1954 production of On the Waterfront.

‘You couda been a contender,’ she told me, vowels squelched as if fresh out of Joisey.

By the time I had gathered that little nugget into my compromised cortex, Nightwatch had moved on, skipping through the random thought zone, gathering arbitrary mind burps from hither and yon and casting them before me:

‘Eight t’ings before the ninth.’

The latter after she suddenly leapt from her Victorian oak and barley twist carver chair and peeked between blackout curtains at the night sky.

‘This has been fun, Mandible,’ she said, offering a chaste peck on my cheek before opening her office door and waving me out, ‘but it’s time to get back to work.’

‘We must do it again sometime,’ I told her.

‘The unexamined life is a life half-lived,’ I mooted, liberally bastardising Socrates. By then I had passed through the door sufficiently for her to land a kick on my backside from one of the work boots I hadn’t notice she’d changed into.

‘Examine that,’ she said.

I bent down to pick up the sign the slammed door had tossed at me. I recalled it had read ‘The Doctor never lies’ when I went into Nightwatch’s office two hours ago. It now shared this lengthier aphorism in small type: ‘It is not enough to be industrious; so are the ants. What are you industrious about?’.

Indeed. My stalled issue paper: ‘The Seamless Leverage of Indolent Deliverable Experiences [SLIDE]’, remained beached on my desk and if I was going to be industrious about anything, this should be it.

Below its first subhead, 1. Define Issues, I wrote: ‘It is the modus operandi of the representatives of our democracy to vacate the field once the jollity of the electoral cycle passes from eager and profound pronouncement into the stasis of job husbandry.

Somewhere between the doable and the doing, enlightened self-interest scums to the surface and focus shifts to shoring up alliances, deadening debate with blame-shuffling, wind-gusting and fudge-baking, while simultaneously lip-serving the community into submitting to a ballot that mimics the previous one.

‘There is a cacophony of reasons why this happens:

Well, look at that, I told myself, we seem to be off on a bit of a journey here.

Out the in door

‘Frogs’ piss,’ said Ned-head Barista, leaning over my shoulder whilst effortlessly balancing an array of coffee treats along both heavily-inked arms. Revealing bronzed teeth through his afforested face, he affected what he must have thought was a conspiratorial grin. I noticed two teeth were missing where somebody else must have punched him.

‘Governments reflect the population they serve. Those turds are not the problem. We are the problem,’ he ashtray-breathed into my face, while placing three macchiatos, an extra hot flat white and two skinny soy lattes on my desk.

‘I didn’t order those,’ I snarled.

‘No’, he effused, pulling up a chair. ‘Nightwatch thought we would need them.’

‘We, we, we, all the way home,’ said Nightwatch, arriving on the wastepaper bin she had upturned and spilled across the floor. She was now wearing overalls under a high-viz top, the same work boots that had earlier assaulted my buttocks, and a hardhat sporting a sticker proclaiming ONION PROUD!

‘Shouldn’t that be UNION PROUD!?’ I challenged, still miffed at the way she had disposed of me after her whacky word association frolic.

‘What ‘ave you got against ze onion?,’ she purred, deploying the cadence of a French heiress educated at the Sorbonne during the student uprising of 1968.

Meanwhile, Ned-head Barista had downed the first of his soy lattes followed by a macchiato chaser. The milk leavings stuck in his beard did nothing to alter my low opinion of him.

‘We have decided to terminate your contract,’ he said, allowing tiny gobs of coffee goo to fly through the air towards me.

I’m trying not to look addled. Have I just been fired by the basic-wage-coffee-guy and a rare genius sociopath? Is that what happened?

‘I can see you are a bit addled,’ said the walking bush. ‘What you are witnessing here is a revolution in management techniques. We call it Stealth Management. I am, in fact, the Chief Operating Officer at large. I use my deft beverage construction skills as a way of spying on my workforce, which I do freely and without favour.

Being a false confidante allows me to weed out the loyal, the diligent and the dedicated. Our focus here is on time-wasters, disrupters, wreckers and subversives – KPIs which you were meeting in spades.

Of course. I’ve never been industrious in my life. How could I fall for such a pat bit of prattery? I had met my match and once more I was being escorted from the premises with a fistful of money and an open horizon.

In my coat pocket I discovered a note. It was an invitation to dine. Late. Signed, ‘Grace’.