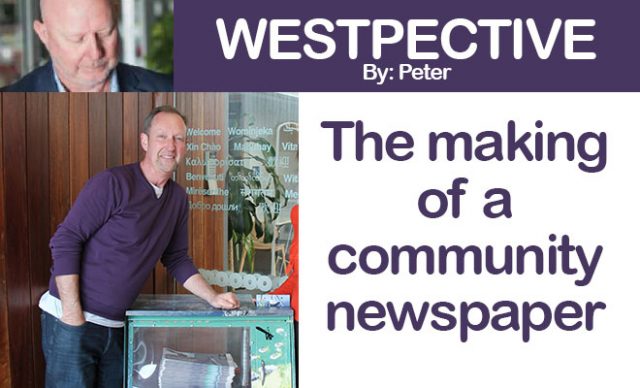 “Close your laptops.” Derek Green told his ‘Work for the Dole’ group. “Let’s talk about what we’re doing here.” Like a footy coach who suddenly realises the game plan doesn’t suit his current playing team, Derek understood a fresh approach was needed if the forthcoming Westsider issue was going to see the light of day.

Most of the disenfranchised individuals in the room had endured long stretches of unemployment, and if truth be told, more jobless days lay ahead. If their job prospects were poor, so was their literacy. Writing articles for a newspaper … did anyone really believe it was going to happen?

But a community publication also needs a website, distribution network, sales team and social media presence. What if Derek played to each participant’s interests and strengths?

“You want to practise your language skills?” Derek asked a guy in the front. “You work on that.”  He continued around the room. “You’re really good at working out directions to different locations – you can start up our distribution network.  You’re good at talking – you help with sales concepts.  And everyone else pitch in where you can …”

To be fair, the bulk of work – sourcing stories and laying out each edition – was left for Derek and a core group of supervisors to shoulder. But in those Job Services provider work-spaces, the soul of a newspaper for the community, by the community had been awakened.

“Right there was where The Westsider was setup. Up skilling people. Getting people to collaborate.  Giving a voice to people who needed it.  Doing this together,” Derek says.

This month, seven years later, a new editorial team publishes their first edition. What better time to interview the outgoing managing editor. I’m keen to know whether there’s truth to rumours of a journey from Work for the Dole program to respected community newspaper with an expanding readership. And discover what kind of miracle worker made it happen.

One day he will be considered a pioneer in a revolution.  To Derek, it was merely deciding the conventional career path was not for him.  After completing a university degree in education, he travelled overseas landing his first job in a professional photo lab.  It was the moment the world turned digital.

Quick on the uptake, Derek invested time, money and energy into new computer technology, becoming proficient in areas such as digital imaging, animation and desktop publishing.  In the early 2000s, Derek started his own business as a digital media specialist, building websites and producing corporate multi-media CDs. He managed to blend his formal tertiary training with newly-acquired computer skills by developing e-learning software, an area of the education industry set to boom.

Derek was now married and living in an inner west postcode the well-travelled couple had chosen as an interesting and diverse place to raise a young daughter. He’d grown up in the east, but describes the experience of moving to a westie neighbourhood in 2005 as, ‘finding our tribe’.  “The first people we connected to … fifteen years later, are some of our closest friends,” Derek explains.

With the idea of varying his working week, he pondered getting a part-time job. A Facebook post caught Derek’s attention: a community group was searching for an editor.  Here was an opportunity to indulge his passion for storytelling. Indeed, one side of his family were newspaper people; an old-school journalist uncle often remarked, Derek had missed his true calling.

He started as editor of The Westsider in 2014, which entailed spending two days a week as supervisor of a Work for The Dole group tasked with the job of producing a newspaper. However, after two years it became clear government funding would not be renewed.

The Westsider needed financial backing if the publication were to survive. Derek had been educator, media specialist and storyteller. Now the situation called for a self-proclaimed ‘pseudo-socialist’ to turn entrepreneur, and a convincing one at that.

Driving around inner west streets, Derek noticed in advertising on billboards that companies often sought to leverage from community spirit. He decided to visit twenty or so traders, inviting support for a genuine local publication. Derek issued each with the following challenge: “Show us.  Be a champion of the west.”

A surprising number responded enthusiastically, but there was one standout. Inner West Community Enterprises, which oversees the Community Bank, Seddon, essentially secured The Westsider’s future. To Derek’s call for sponsorship they asked: “We love it and want to do more than that … how could this work?”

The 2017 March issue heralded the start of a new volunteer era.

For 68 editions Derek has lived a Groundhog Day existence each month as follows: calling for articles, artwork and advertising; deliberating about the layout of a new issue; spending hours copy editing and proof reading; and finally, printing and distributing the latest issue.

A time would always come to step off the treadmill.

As Derek pursues new horizons in the e-learning sphere, there’s much to look back on and smile about: engaging stories, community engagement and growing stature in the local media landscape.  But as he reflects on opportunities provided to hundreds of volunteers, interns and Work for The Dole participants, the conversation momentarily pauses. There is silence. A few seconds pass and Derek continues: ‘I actually feel that’s the greatest achievement of The Westsider.’