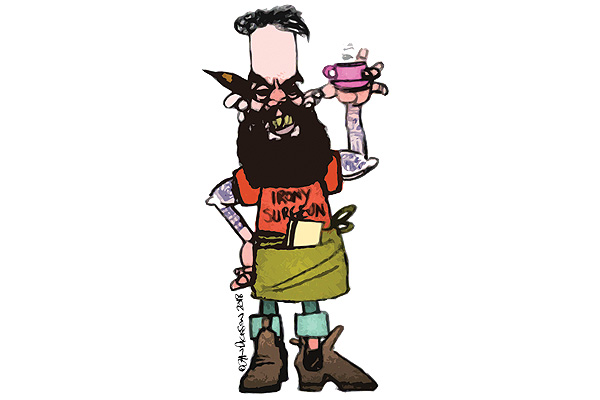 Until Nightwatch acquainted our hero with this epithet, he had no inkling that others might think it applied to him, or that they might have been enjoying a snigger or two at his expense. Confused as to how he should react, Mandible sought clarification from Nightwatch – but had to wait until sunset before he could be sure she was awake.

Messages from the other side of the fence

‘I was totally uneasy with this description of me. It dripped with sexist provocation and blame shaming. As far as I was concerned, my pairing with Jan had reached its natural conclusion and a recalibration was required. But for some reason, Nightwatch was trying to send me a message. I had no idea what it was. I needed to find out more.

I made my way to her office and the sign on the door had been flipped to ‘Come in, but you’d better really mean it!’ I knocked. Five minutes later, I knocked again. A noise redolent of the escaping air of a just-inflated balloon being throttled allowed me to believe that I had been invited in. I hadn’t.

Nightwatch, red-faced squealing, was behind her battery of steam punk computery struggling to attach some kind of harness to her tee-shirted torso. As I obliged her blandishments to ‘fuck off’, I noticed that her shirtfront read ‘Go fish with a dotted line. Catch every other fish’.

I stood outside in the darkening hallway, batting off conflicting inputs of shock, curiosity and a strange kind of arousal. I passed the next hour reading tiny pencilled messages I discovered had been scrawled around the door jamb leading to her bunker. I assumed Nightwatch was the author. Each minuscule sentence contained fewer than ten words. They were sometimes funny, often aggressive, usually opaque. There were shopping lists of curious items: ‘Propellors, aches, nine totems and a presence’. There were deliberate misquotes of the Bard, ‘to topiary or not to topiary, that is the question’ and tight rants, ‘Dutton is hard white!’. Each was a clue to the singularity of the person who sheltered behind this door. Early analysis suggested a high-functioning creative intelligence with little regard for convention and no interest in conforming to the mores we lesser humans succumb to in allowing our lives to be uniform and acceptable.

Nightwatch was an alien.

Not in the bug-eyed, green-skinned, bubble-headed, threefingered outer space sense. No, she was of that tribe who genuinely did not give a fat rat’s arse what the rest of us mortals might think, or do. Difficult to chum up with one of these, but it was my instinct to do just that.

My attempt to dispute her taunt was cut off with: ‘If you would like to come in, please bring me an extra hot flat white coffee in a pink china cup, eh boyo.’

I sloped off to the caff on the third floor. Exploited baristas were still on duty [and would remain so for some hours, toiling for the shattered hopes of a decent wage]. I placed my order with a bearded Ned-head who grinned and asked if it might be an entrée into the Nightwatch inner sanctum. I felt soiled.

So there it was. My willingness to placate a fellow worker with an innocent coffee [albeit in a pink china cup] was the signifier for the disintegration of a ten year relationship and my pliant part in its downfall.

I tried viewing this metaphor from other angles in search of greater enlightenment. Did the coffee’s temperature [‘extra hot’] tell me something? Did her demand for not just ‘white’ but ‘flat white’ reveal a deeper truth? I wasn’t brave enough to test the colour of the cup. And why a Welsh accent?

There was also something else nagging at the edges of my consciousness: what on earth was the harness for?

Ned-head Barista passed me by on another poorly rewarded errand with a punchable grin peering from the bush of his face.

‘Did you see the harness?’ he mocked. At least, he would have said that if he had spoken at all. I just know it.

I returned to my desk for some deep fidgeting. In front of me, the pristine sheets of A4 headlined with my project’s title, ‘The Seamless Leverage of Indolent Deliverable Experiences [SLIDE]’, and its first subhead [1. Define issues] were still towering above a page full of…nothing.

What seems to be the problem?

Her door opened before I could knock. The sign had changed again. This time it read ‘The Doctor never lies’. She was wearing a Harris tweed, three-piece suit.

Through the buttonhole in its lapel, she had stuffed a sock decorated with a dandelion motif. She squinted at me through round, empty, steel spectacle frames and invited me in: ‘Komm herein.’

Her accent had become that of a German intellectual born at the turn of last century in a small village near the Black Forest, who had then migrated to Vienna in 1892. I discovered later that it was, in fact, an uncannily accurate impersonation of the little-known psychoanalyst Fritz Spitzen, whose early theories of ‘mind clump’ were quickly mown down by the more glamorous musings of Sigmund Freud and Carl Jung. At least that’s what she told me.

She invited me to lie on a moulting chaise lounge that had replaced the precarious camp bed last seen next to her desk on my previous and only visit. Perhaps I could just sit – the role-playing thing was wearing a bit thin.

She pulled up a Victorian oak and barley twist carver chair, sat down, placed an empty clipboard on her lap and began to question me. Her inquiry followed a similar pattern to that of the graffiti that decorated her office door surrounds.

Then,‘Truly wake the hunter, but does he sleep?’

I was stymied at every cul-de-sac – not because of her arch Sherlockery, but because my slippery mind kept returning to the harness. What was it for? Moreover, where was it now?’

*Possibly not his real name.