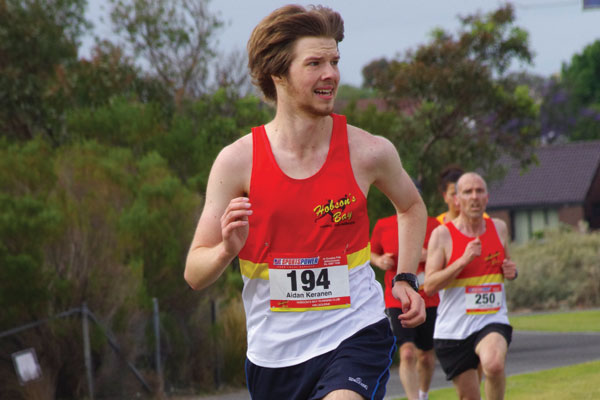 Daniel Rees (19.21) and Kieran Leonard (19.30) also dashed home in under 20 minutes. But star of the show was Robert Falloon, first past the post in 24mins, 19secs, just five months after undergoing major heart surgery.

Falloon, 63, of Williamstown, was “very happy” with his run after quadruple bypass surgery for a heart condition last August.

“I’ve always been reasonably fit. I walked in the first two handicaps (after surgery) and ran in the next two,” he added. He joined the popular social running and walking club about three years ago.

Another highlight of the monthly Saturday morning event at Williamstown’s Greenwich Reserve was 21-year-old Aidan Keranen – son of club founders Eero and Sarah – receiving the Greenwich Cup, as club champion on handicap points for 2015. He wasn’t born when his parents founded the club.

Ironically his dad, Eero Keranan, the flying Finn who still holds some Victorian junior records, has never won a 5km handicap in the club he started, which suggests the handicappers might be too harsh on him.

The Hobsons Bay Running and Walking Club 5km handicaps are run (and walked) at 8am on the last Saturday of the month at Greenwich Reserve, Williamstown, and open to all. Visit www.hobos.org.au

January’s Handicap was the 259th run/walk in 22 years.