Mary won her freedom in a sun-drenched continent. Three years later she was pinged. Her arrest meant the days of languishing ‘round pubs and brothels at the top end of Little Bourke Street had finally come to an end. Rolling a traveller for the 50 pounds in his pocket was no small thing.

In 1857, Mary was convicted of stealing. And her two year sentence was to be served aboard the Sacramento, the female prison hulk moored a hundred metres or so from Point Gellibrand in clear view of Williamstown’s lighthouse.

Along with Mary, hundreds of women served their time on the Sacramento. This month we’re celebrating International Womens’ Day, I can’t think of a better time to remember them.

On a weekend, Point Gellibrand car park is packed with tourists taking in glorious views of Port Phillip Bay, strolling along the promenade or queuing at the ice-cream van. Those fortunate to be there at the right time catch a close-up of a container ship negotiating its way up the channel, or watch a flotilla of yachts twisting and turning in tricky winds.

Locals know it’s a different matter on a cold, wintry day. With a 25 knot sou’wester blowing from the Bight, the exposed Williamstown peninsula turns into an icy, blustery hell. Certainly no place for spending nights aboard a prison hulk, contemplating one’s wrongdoing to waves slapping against the wooden hull.

Thankfully, a short account of life aboard the Sacramento still exists. In the Argus newspaper article ‘The Penal Hulks’, we peer through a window into Mary’s time of incarceration.

Mary’s days would have been taken up stitching shirts by hand. In colonial times, brain-numbing needlework is what hard labour amounted to for a female prisoner.

Seated mid-deck alongside Mary were others all dressed in the same prison garb: ‘loose grey jumper, or jacket, gathered in at the waist, and a dark red striped woollen petticoat’. All well fed, and in good nick … cleaner than some of the blue coats. Look closer though, and there was that all too recognisable look of the street on their faces – ‘sodden’, beaten-down.

On a lower deck, late afternoon, time for finishing work and taking supper, women huddled in twos and threes, walking in and out of cells as they felt free. While a stony silence pervaded the men’s hulks, guards seemed powerless to stop conversation on the Sacramento. Or even the filthy language and screeching of a bothersome inmate that turned the women’s hulk into a madhouse. Still, trouble was rare; deprived of hard liquor, unruly types were well-behaved.

A chaplain was never far away, and it goes without saying, Sunday was devoted to Christian worship. The Sacramento had a makeshift school for the twenty or so children onboard, run by a virtuous inmate.

How hundreds of women came to be locked up in a floating prison starts, incredibly, with the discovery of gold near Ballarat. Newcomers came in droves: wide-eyed hopefuls from abroad or interstate. It also served as a green light to authorities elsewhere, eager to empty their prisons; pardoned convicts in thousands boarded sail ships headed to a recently-constituted Victoria.

Not all were bushrangers or cattle thieves; even so, the crime rate was soaring in a young, burgeoning Victoria. And Melbourne’s gaols were overflowing.

The solution concocted by authorities certainly had a modern, economic-rationalist ring to it: establish a maritime stockade at Williamstown and load five wooden prison hulks full of convicts. Just for good measure paint the ‘unhandsome tubs’ yellow, the colour convicts and settlers alike knew, marked the worst crime.

Among this ugly fleet was the Sacramento, the hulk assigned for women who’d fallen foul of the law. 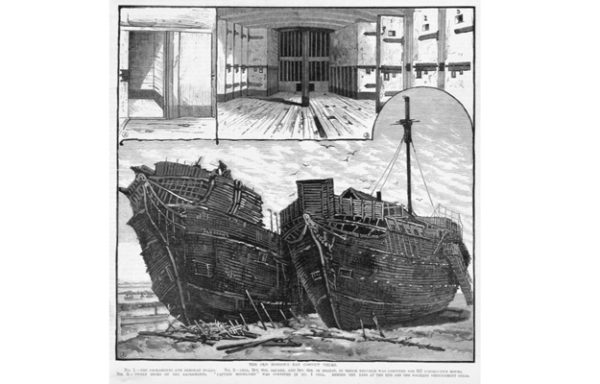 Mary’s official prison record can be accessed at the Public Records Office, Victoria. While the parchment is faded, script hard to read, we discover that aged 25, and married, Mary was sent on a seven-year bond to Australia. She was 5 ft 3 and 1/2 inches, and of medium build, so slightly larger than many women of the day. Bet there’s a telling story to the scar on the right side of her neck.

Clearly, Mary was no angel. Neither were some of her fellow prison hulk inmates: ‘scum’ dredged from Sydney streets. One was found guilty of murdering her child in a drunken rage.

But most of the 100 or so onboard the Sacramento were down-and-outs. Along with prostitutes and petty thieves, police used the Vagrancy Act to keep the community clean of wayward young girls and homeless old women. Colonial Melbourne was horrified to discover, the hulk was also home to a destitute orphan.

‘I would ask, is the country doing justice to itself – is it just to the succeeding generation – to permit such a growing evil amongst us?’ wrote a concerned Victorian in a letter to Argus’ editor. The evil referred to was the practice of returning errant girls to prison, sometimes on short sentences of a month. It was scandalous that aboard the Sacramento were placed: ‘young girls whom pinching poverty has driven to the commission of a petty larceny, and children, who have committed no crime from the ages of 5 to 12.’

After a decade, an awful era in Victorian prison history came to an end. With Melbourne’s new gaol, Pentridge, finally built, the hulks were decommissioned.

In case you’re wondering, Mary was pardoned soon after the anniversary of her first year aboard the Sacramento. A handwritten entry in her official record under a section headed, ‘Character while undergoing Sentence’ reads: ‘Gaol Report Conduct Good’.

The Age recently reported that the rate of women’s incarceration has skyrocketed … off the charts for Indigenous women. Human rights advocates blame changes to the prison and legal system that: ‘are ensnaring disadvantaged women responsible for relatively minor criminal offending linked to poverty and substance abuse.’