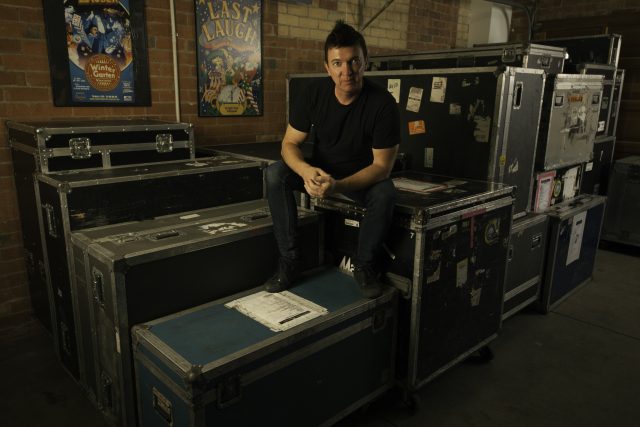 Michael hasn’t been able to park the family car in the garage for a while. Actually, he has never been able to.

Michael Boyd is Seddon’s own resident illusionist. I meet with him in his stunning warehouse apartment where his large garage is stacked high with road-cases full of stage illusions. Sitting with him, surrounded by large boxes and magical looking props, I can see that he quite literally takes a lot of his work home with him.

“The job I do is a lifestyle job; I liken it to people who work in a circus, because it doesn’t really end. I never come home after a show and think that I have finished work for that day. The emails and phone calls never stop.”

Although frequently on the road touring his illusions internationally or around Australia, Michael still tries to live a normal home life in spite of all the interruptions.

Michael met his wife Cathy, when they were living in a share-house in North Melbourne. They were soon romantically involved, and soon after that she had replaced his assistant to join him on stage. They now have their daughter Chloe, who has been raised on the road and back stage, as well as having a more normal life in the inner-west with mum and dad.

“She comes on the road with me a lot too, which means that she is away from school quite a bit so we have our schooling routine when we travel. She does her writing and homework while we are setting up props and getting the show ready. I check with the teachers, and most of the work is done on computers these days so it’s manageable. I think she is learning a lot being on tour through Australian towns.”

Michael used to rehearse in the old MAPA space on Victoria Street, Seddon, but now uses their new facility at Spotswood. “There are no stairs at the new location, which is better for rehearsing our larger illusions. There is a train station right near the space. There are great cafes, I really like the area, I think it’s great.”

Michael also works out of Kindred Studios near the Yarraville Gardens, where he collaborates with a personal assistant to promote his shows. He likes to keep things local and can’t imagine moving away from inner-west. “All I really want is just to give our home a growing pill, so we can stay where we are.”

When asked about how the area has changed, he tells me. “I have been here for 13 years in a converted warehouse apartment. Just to give you an idea, at the time people were inspecting the place, back then the feedback was that there were too many stairs, and nobody could see why you would want to live in a warehouse. We loved the place immediately but it just wasn’t what people wanted back then.”

The building Michael lives in was once a cricket bat factory. It has retained much of its old warehouse feel, and is now a highly desirable abode.

“The Seddon village wasn’t really a village a decade ago either, there were only a few cafés and bar venues back then. What I love about Seddon now is that we can just walk up the street and everything is there – we love the nice restaurants and bars. When we want to go out, there is no need for us to go anywhere else, we just walk to the village.”

Although being trained as a magician, and making a living as a stage illusionist, Michael is still a father. “I’m definitely a different person on stage – the person at home is completely different. On stage I only have a short amount of time and it’s what all the work goes into. At home, I’m just a dad changing lightbulbs, washing dishes and making dinner. I still like to make time to go for a bike ride with my daughter in the afternoons, and I go walking with Cathy in the mornings.”

The couple’s daughter Chloe doesn’t see her dad as having an unusual job. She has grown up backstage and is used to all the showgirls and the stagehands. Michael tells me that she can sit in the audience if she wants, but she prefers to be backstage with him and watch what he calls ‘the real show’ behind the curtain. “I would never pressure my child to follow my career path, but of course if they grow up around it they become interested.”

Michael tries to keep a low profile these days when he socialises.

“I used to carry a few props with me in case anyone wanted to see a trick, but not anymore. I’d rather talk about the other person, or talk about something other than my work.”

He says that there are always a few standard things people ask him when they learn he is a magician. “Of course people always ask me to do a trick. The other thing people will ask is what instrument I play, because they thought I said I was a musician. Most people are fascinated and I have a lot of the same conversations. So now I usually just say I’m a promoter, because when I’m away from the stage I do like to switch off.”

You can stay abreast of Michael’s shows at www.michaelboyd.com.au or say hi if you see him around the Seddon village. Just don’t ask him to do a trick for you, because if you’re seeing him on the street, it’s his day off.