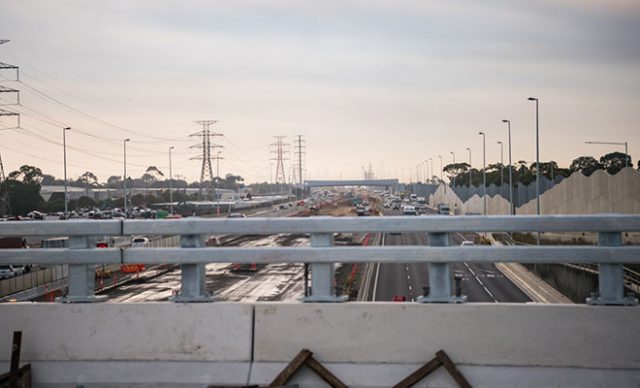 From Friday 17 September, construction activity on the West Gate Freeway will step up a gear, with West Gate Tunnel Project crews delivering a month-long spring roadworks blitz. Motorists are strongly encouraged to plan ahead for the four-week construction program that includes road closures at the following locations:

Crews will operate around the clock to carry out these vital works for delivering critical upgrades at Grieve Parade, Williamstown Road and the M80 interchange. The works are scheduled during the school holidays to make the most of less traffic on the roads and reduce the impact to road users.

Each closure will help deliver tremendous benefits to the community. The Williamstown Road works will ensure the Hyde Street ramps can be built, which will take thousands of trucks off local streets in the inner-west, while the Grieve Parade and M80 works will vastly improve traffic flow on and off the freeway.

The community is already benefiting from a huge amount of work that has been completed along the West Gate Freeway. This includes rebuilding existing lanes, adding new and improved noise walls to replace outdated ones, and installing two new pedestrian bridges as part of 14 kilometres of new and upgraded walking and cycling paths.

West Gate Tunnel Project, Major Transport Infrastructure Authority, Chief Executive Peter Sammut, said that a massive amount of work will be condensed in this four-week campaign and will take the project one step closer to widening the West Gate Freeway from eight to 12 through lanes.

“We want to thank motorists in advance for their patience over the spring construction campaign and remind everyone to keep calm and drive safely,” Mr Sammut said.

“Our crews are toiling around the clock to get these works done swiftly and safely, and we are eager to get them finished so we can open up the upgraded ramps to motorists. Each construction blitz goes a long way to adding the four extra through lanes to the West Gate Freeway, and slashing travel times between the west and the city by 20 minutes.”

For motorists travelling on the Princes Freeway to exit at Geelong Road:

For motorists joining the West Gate Freeway at Grieve Parade to travel towards the city:

Motorists should allow an extra 15 minutes if traveling along the freeway.

To prepare for your journey, check Victoria’s Big Build website at www.bigbuild.vic.gov.au.

PREPARE FOR DETOURS ON THE WEST GATE FREEWAY THIS SUMMER

LANE CHANGES IN PLACE ON THE WEST GATE FREEWAY