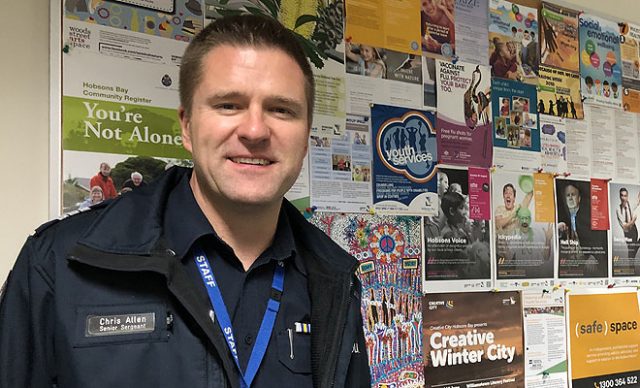 He’s going for my gun!’ Chris screamed to his partner. Unbeknown to two cops jumping out of a divi-van, the mentally-ill man weaving in and out of traffic was hellbent on destruction. Seconds later, Chris was caught in a deadly arm-wrestle for the firearm holstered on his waist. As stressful days at work go, it’s got to be up there.

Chills go down Senior Sergeant Chris Allen’s spine as he remembers. Thankfully, training kicked in. And cavalry were on its way. ‘How sweet the sound of sirens … that fills the air,’ Chris reflects.

I’m sitting in an office in Williamstown’s waterfront police complex across a desk from a towering policeman. A hearty chuckle bounces off the walls whenever Chris is amused. Which, knowing what he’s seen in the last twenty years, is surprisingly often.

Chris is the son of a distinguished, New Zealand vascular surgeon. Hard to imagine, but he was destined for a banking career until back-packing ‘round Oz in his twenties when he answered a Victorian Police recruitment call – something he puts down to as a young man’s lure of adventure. So with nothing too lose, this affable Kiwi embarked on a vocation promising ‘front row seats to the best show in town’. 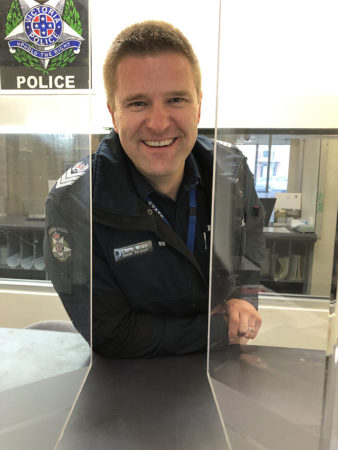 After graduating from Victoria Police Academy in 2000, Chris headed wild west on a mandatory 12 month posting. Stationed in the Latrobe Valley, Chris found himself thrown in a deep end of domestic violence, armed robberies and pub fights.

With backup a town away, Chris and partner were left to ‘sort it out themselves’. It doesn’t bear thinking about a nasty crowd turning on two coppers trying to break up a pub brawl. A world of ugliness can go down in the twenty minutes before stormtroopers come crashing through the door.

With a new inner-city posting, Chris patrolled Richmond’s streets for the next ten years consolidating his ‘craft’, establishing enduring friendships and making his way up the ranks. She’s not a member of the police force, but while working in Richmond, Chris met his wife of eight years. They now have a two year-old daughter. 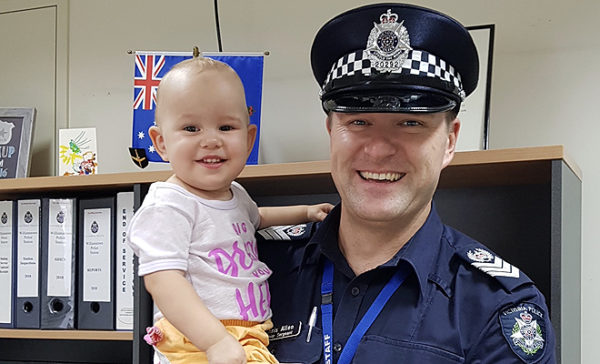 The Critical Incident Response Unit (CIRT) is a highly-equipped, elite unit operating 24/7, and deals with violent confrontations. Chris’ thirst for excitement still needed quenching, so that’s where he headed for the next seven-year chapter of his police career, specialising in personal protection. ‘One day you might be sitting around a house with a siege unfolding, and the next day rostered on close personal protection duties escorting an overseas prime minister or president,’ Chris recalls.

After 16 years, the pressure of being on the road, day-in-day-out had taken a toll. Not to mention shift work.

He’d miss CIRT, but in 2016, Chris took on a support role to the Superintendent of Footscray Police Station. In the next eighteen months he was immersed in ‘big picture’ policing, learning how to develop strategies to address emerging crime themes.

Sound preparation for his next appointment in 2018 as Willi’s top cop.

The days of patrolling streets are behind him. But as station commander responsible for the local community’s safety, it’s far from an end to stress. He knows firsthand what confronts operational police everyday they buckle-up an equipment belt.

The welfare of 43 staff members is now what keeps Chris up at night. ‘I was on the phone just this morning with a female officer who was kicked in the face recently in Williamstown and had her lip split,’ he says.

Police were once expected to ‘suck it up and get back on the horse’. Chris assures me Vic Pol now place a high priority on the wellbeing of its members whose daily work life not only exposes them to the risk of physical harm, but also post-traumatic stress.

Just as well Chris is done with adrenaline surging through his veins. As crime statistics go, Hobsons Bay is a ‘very safe area’. No suburb is crime free though, and local police can still find themselves jumping fences after crooks. Summer months become a challenge when crowds from the western suburbs converge on local beaches, and an extensive program is in place to head-off problems. Expect to see more blue uniforms out on the streets.

These days Chris gets his kicks from working with the community, getting involved in local projects. For instance, Williamstown Police are partners in The Message Tree initiative, commemorating the importance of the long-gone famous tree to both colonists and the Boonwurrung, our inner-west’s original descendants.

In November 2018, Chris conducted a public forum to discover what locals looked for from their police. ‘We had no idea what the community wanted was to get to know their police more; they want to see us more – see foot patrols … popping into shops to say hello’. Chris grabs a laminated sheet from a notice board to show me the Community Safety Plan developed from the feedback. Senior staff have been allotted projects and progress reports will be provided to the community every three months.

So what does a long-standing cop believe are the traits of a good policeman? Start with being an astute judge of character – their lives depend on making quick and accurate assessments. ‘That, and the ability to eat quickly,’ Chris says, before breaking into a smile.