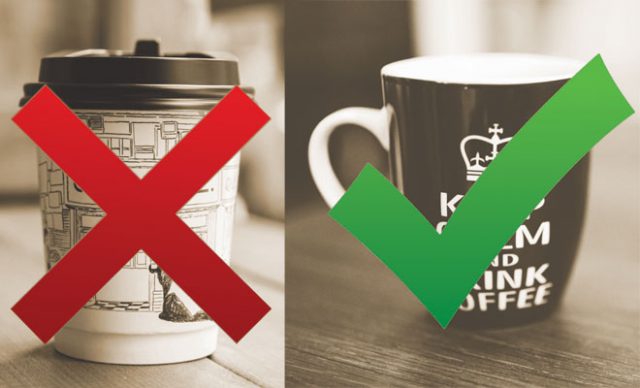 I’m addicted to my reusable coffee cup. I take it everywhere with me. It’s making me judgy. It’s definitely causing me some angst. The internal narrative of shame that now accompanies a takeaway cup outweighs the joy that is coffee. Plus, I think we just forgot, coffee tastes pretty rubbish in a paper cup.

Single use cups are a double whammy of waste. The cup part looks recyclable but the plastic lining that keeps your coffee warm and stops it leaking onto your hands isn’t, or at least, there is contention around its ability to be recycled, or which councils accept them for recycling. When the plastic and cardboard fibres remain attached during pulping, it’s unsuitable to re-use as a paper product. Sitting on top of the cup is a plastic lid and by now, we all know how detrimental plastic is to our environment, animals and marine life.

While there are liners made from compostable bioplastic, recognising which is which can be problematic and currently this coating is more expensive and used less. Even if parts of the cup are compostable, biodegradable or recyclable, the resources used in the production of a single use cup that’s discarded after the few minutes it takes to down a coffee, can be avoided by simply getting your caffeine fix in a reusable cup. Recycling is a last choice; it’s preferable, where possible, not to produce single use products in the first instance. Further, the actual recycling process in Australia is in a world of pain – a mountain of stuff is just not reaching a recycling facility. Given the predominant users are people ‘on the go’, the majority are tossed in a bin in one piece and end up as landfill, hanging out with all their other billions of coffee cup and plastic lid mates, keeping on and on and on.

It’s easy to take your own cup, so, why are there so many single use coffee cups still bouncing around in the hands of so many? Due to the social boundaries around accosting people as they order their takeaway coffee sans reusable cup (or those who shove two plastic straws into their plastic juice cup with plastic lid), I can only surmise – like the cowardly lion, I’m more inclined to be judgy from afar. The number one reason has to be convenience, which essentially comes down to availability. While some cafes give a small price reduction for a reusable cup, it offers little enticement for those who don’t rate the environmental impact of single use cups. I haven’t heard of anyone refused a coffee because they ordered too many in takeaway cups. Making money in a cafe business is hard enough, alienating customers is the last thing cafe owners can afford to do.

There are times when forgoing a coffee opportunity or drinking from a takeaway cup arises – forgot to bring your cup when you’re actually at the cafe, isn’t one of those times. Shake it up and drink in-house from a washable cup, quickly, if you’re in a hurry – it’s not like Melbourne coffee is hot. It’s that awkward situation when someone else picks up the coffee, in advance of a meeting or catch up, and getting all fussy and demanding a reusable cup risks you coming off as a bit of an ungrateful dick. I know that using an occasional single use cup isn’t going to destroy the world on its own but once you are fully in the reusable cup camp, there’s no going back.

There are numerous groups across the west looking out for the environment and going well beyond the single coffee cup issue by seeking to reduce waste, recycle or up-cycle, refill, repair or share, trade goods or move away from plastic bags by using and promoting sustainable alternatives. For example, Zero Waste Westies currently has more than 3000 members in their Melbourne Western suburbs Facebook group; where it ‘is all about sharing experiences, knowledge, ideas and inspiration in a supportive and respectful environment on our journey to a zero waste lifestyle’. Members offer tips on where to locally buy bulk foods thereby reducing packaging, recycling and composting ideas, businesses that support waste reduction initiatives, eco- friendly hair, body and cleaning products and sharing products that would otherwise be thrown out.

The Inner West, Melbourne Repair Cafe, aims to reduce landfill by up-skilling, repairing and giving away household goods rather than discarding. The Buy Nothing Project, based on a ‘network of micro-local gift economies’ to ‘give where you live’ has several groups across the west. Members residing in the listed suburbs of each group, can ask for, give away, trade, borrow or share items or services without any monetary exchange. Freecycle Inner West similarly is a group set up to giveaway items no longer needed to someone who might.

Victoria has been slow to come to the party on banning single use plastic bags and had a touch of the sooks when it was announced this was being introduced from November 2019; to add salt to the already festering wound, the big supermarkets jumped in early. Imagine the major life adjustments and brain fatigue of needing to remember to take reusable shopping bags when you head to the shops and now, your coffee cup too… Crazy times. Boomerang Bags is a national movement aimed at reducing the use of plastic bags by holding community sewing bees and workshops to sew reusable bags from left over fabrics, linen, table cloths, etc. Some groups have branched out to make reusable make up removers, beeswax wraps and chemo hats. There are numerous groups across the west including, Seddon Boomerang Bags, Hobsons Bay and Maribyrnong Boomerang Bags.

There’s quite a market now for a reusable coffee/tea/chai/whatever cup, which raises a counter argument around the resources that go into making all these cups for us to smugly wave around, showing off our eco- warrior ways. Personally, I am partial to a glass KeepCup, especially if I can buy one branded by another worthy cause on my list of things to be getting behind, and double down on my smugness. For me, it’s Pets of The Homeless.

When compared to what some of the members of these groups are doing across the west, my social conscience and actions rate fairly low level but if you can support and promote a not-for-profit charity doing great things, while also drinking your coffee, with a nod to the environment, it’s a solid start.

And we all have to start.