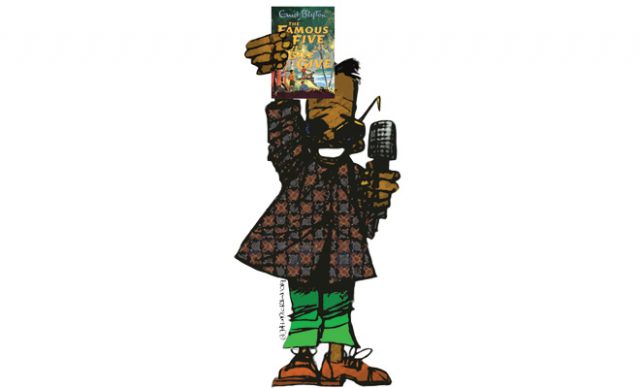 While Fatso and McKeever plot to relieve a local church of its Easter income, we learn that they have stolen a van that contained a motorised wheelchair. McKeever has taken to this disability support mechanism with a single-minded joy.

Within the bowels of Church of the Mighty [War Against Satan HQ!! ], its chief narcissist and master of the five-finger income generation, Brother Jimmy Masters, is tortured over whether his Enid Blyton-obsessed lieutenant and Indonesian migrant, Pria Kristen, is the real deal. Masters’ judgement is weak, undermined by his need to revive a truncated dalliance with his secretary, Rosa Flow, who has left the building.

We also know that somewhere in the future, smokin’ Detective Sergeant Bryan Paterson, has formed the Easter Plates Taskforce and is scouring CCTV for evidence of a crime that Fatso and McKeever have yet to commit. Confused? Me too. Let’s find out what’s going on…

Fatso is laughing his arse off at McKeever’s wheelchair antics.

‘Tight doughie, Machismo,’ appraises Fatso as he watches with a kind of wet admiration as his friend turns his motorised wheelchair on itself, smoking tyres leaving a thread of grey rubber residue on the pristine white and blue of the disabled parking sign painted into the two carparks their [stolen] van straddles.

Fatso is deeply in love with McKeever and tells him often. Has been since they first crossed paths in Java’s Sukmiskin prison on 4 April 1981, a date Fatso had immediately tattooed across the insides of his fingers with a sharpened ball point pen, its ink mixed with soot. Fatso was at the fag end of ten for possession of an illegal substance [dynamite] and McKeever was awaiting his fate after pleading not guilty to a charge of assault causing actual harm. Police claimed that he had deliberately broken the arm of the son of the Minister for the Interior.

Despite his intimidating size [a crumb over two metres], McKeever was reluctant to harm anything let alone a Minister’s son, although this entitled badger was clearly an arrogant little tosser and deserved everything that came his way. No, it was McKeever’s hands that were the problem.

Absurdly sized, they operate in a different space time continuum than the rest of his body, and are likely to commit random acts of insubordination while McKeever’s mind is occupied elsewhere. And this is how the Minister’s brat got hurt.

McKeever had taken to living in Indonesia because ‘the weather suits my clothes’. He had made a decent living when his modest savings ran out [almost immediately upon arrival] as an ‘entry co-ordination agent’ on the door of Jakarta’s Best Boogey Baby Boom Room nightclub. It was here that his hands had decided that a polka-dotted pink vuvuzela in the grasp of the entitled scion of one of Indonesia’s political elite had no place in the Room. Not a career-defining move. Somehow, in the ensuing scuffle, that snapping sound was Snot Brat’s left ulna separating from its humerus. Cue McKeever’s immediate arrest by sycophantic local police, who knew which side their bread was buttered on.

Inside the prison, a bewildered McKeever fell straight into Fatso’s arms, weeping profusely, convinced he was for the high jump. But Fatso knew better.

For Fatso had not been idle during his nine years, four months, eight days and 92 minutes as a guest of the Indonesian government. He had assiduously cobbled together a delicate web of influence, built of favours dispensed, accommodations granted, work done, astute alliances, rewards distributed and swift retribution when retribution was required. Many had learned to their cost that he was not a man to be trifled with.

As fate would have it, one of those who had fallen under his sway was the Minister for the Interior. This was due to Fatso inadvertently discovering the Minister’s predilection for a ‘certain kind of comfort’ on his many prison visits, which Fatso duly recorded on the phone camera he didn’t have but made known that he did. From that moment, the Minister was owned. Love decided it was time to cash in, and a stupidly grateful McKeever was set free.

McKeever was instantly deported to Melbourne and began to set up house in that city’s west, anticipating the arrival of his benefactor just eight months later. Once the exhilaration of Fatso’s gift had lifted, McKeever’s challenged synapses began to wonder whether in fact it was actually more of a burden he would have to bear.

Still, the pair found their circumstances genial and their taste for a life of comfort funded by cavalier antics slightly south of the law was a natural bond.

Now they were entering the Church of the Mighty [War Against Satan HQ!! ] through a side door, on a Saturday in April, to test Fatso’s Theory of the
Easter Take.

Brother Jimmy Masters had retreated to his den to brood. Even the heavy gilt frame housing the parchment diploma announcing his success as a Doctor of Divinity [US$17.95+tax from the University of God’s Law, Flat Tack, Arkansas] failed to encourage the usual smirk.

He couldn’t decide whether Pria Kristen’s penchant for quoting Enid Blyton had tilted his confidence or the little cab driver’s interruption of his afternoon bout with his private secretary, Rosa Flow, just two rounds in, had wilted his willpower. He settled on the latter. The idea of pursuing the Blyton conundrum was a bridge too far. It would mean some form of study and that was against his…religion.

He poured himself a ribbon of wine and wondered how he might best reconnect with Rosa before the day was out.

Pria Kristen was chuffed. It was Saturday afternoon and the Church of the Mighty [War Against Satan HQ!! ] was two-thirds full. The Lord’s Bop was plugging in amplifiers, tuning guitars and rattling flashy drumbeats. There were tambourines. Singers were gargoyling their jaws in preparation for a rousing rendition of Those Who Give are Those Who Get, a powerful anthem penned by Brother Masters himself. This wallet-loosener would erupt twice more during the service as the gathered warmed to its message and filled the roaming sky blue buckets with more than the devotee next to them.

This Pavlovian cue was not lost on the odd couple seated front row, stage left. Fatso traced the journey of the buckets with forensic attention as they were filled then emptied into a large metal box, stage right, before again being sent out among the generous faithful. McKeever’s giant form and berserk hands were praising the lord with abandon, periodically standing up from his wheelchair to share an enthusiastic ‘Hallelujah!’, attracting the attention that allowed Fatso the anonymity to case the joint.

Pria launched into his self-serving homily about the boy who came to Jesus after his enviable collection of the oeuvre of Enid Blyton was lost to a conflagration that took his family’s Jakarta home. How he then found the family bible in its ruins and on heeding its message of goodwill, resolved to resurrect this library of Blyton’s considerable works for the benefit of local children.

He kept his promise.

That the valuable anthology now resided in a fire-proof room in his own unlisted Caroline Spring’s address did not negate his generosity of purpose. He resolved that he would not deny access to any Indonesian child who could find their way to his anonymous home. That kind of tenacity should be rewarded.

Pria also thought that drawing his flock’s attention to such a detail would only muddy the waters, and so kept it to himself.

His parable inspired another round of Those Who Give at a slightly enhanced tempo, raising pulses and diverting yet more rivulets of money into the hungry buckets.

All Fatso now needed to know was the ultimate destination of the swollen metal box, but that would require some kind of miracle.

It was time that McKeever was inspired to walk again.

[Detective Sergeant Bryan Paterson of the Easter Plates Taskforce was the hardest man in the Rob Squad. Hard to be around, hard to tolerate, hard to understand how such a lazy bully was allowed such responsibilities. His four subordinates knew they must have transgressed badly to find themselves seconded to this case. Paterson was florid now, stamping, throwing stationery at his colleagues and slapping his own head as if that would shake loose the solution to this infuriating blag, which is yet to happen.]