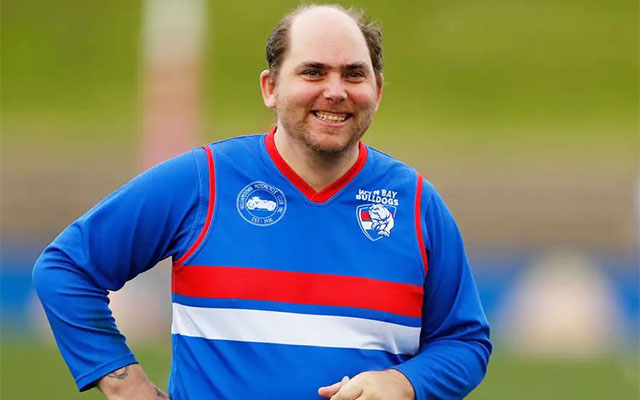 Football has long been a part of Michael Harrison’s life. Growing up in a Fitzroy-supporting household, he recalls always having a footy in hand. And while his passion for the game was a constant, it wasn’t until age 28, a year after his son Logan was born, that Harrison discovered he was of Indigenous descent.

But since then, he’s done whatever he can to learn more about his culture.

“I’m still eager to learn – my boy is 10 years old now, and I want him growing up and learning about his culture, because it’s a beautiful and rich culture” Harrison told ABC News.

“Logan and I try to help out with anything about Aboriginal culture at Logan’s school – he has done a concert which was a traditional dance, and we’re trying to learn Yorta Yorta,” Harrison also shared with the Western Bulldogs Community Foundation.

Recently the Western Bulldogs welcomed over 140 community members through its doors to celebrate NAIDOC week. The Community Foundation and Club hosted an event at VU Whitten Oval which included the Reclink Community Cup match between the victorious Wynbay Bulldogs and Cohealth Kangaroos. The day was designed to acknowledge the history, culture and achievements of Aboriginal and Torres Strait Islander peoples.

“Wynbay have always been welcoming to me – everyone has made me feel welcomed, and even if I’ve had a bad day, staff and other players have picked me up and just been there for me,” he said.

“With a few medical issues I’m unable to play weekend football anymore, but Wynbay gives me the chance to still be able to play – there’s been times where I’ve been struggling with mental health, and being able to get to a Wynbay game or training has helped me get my mind off things.

“On school holidays I get to bring Logan to the club as well – he is always welcomed, and actually gets upset when there is no Wynbay during school holidays.

“It’s a massive added bonus that we wear Bulldogs colours – we are both very passionate Bulldog supporters.”

2021 NAIDOC Week ran from 4 July to Sunday 11 July with the theme ‘Healing Country’.

HUMANS OF THE WEST – LORRAINE WOODMAN