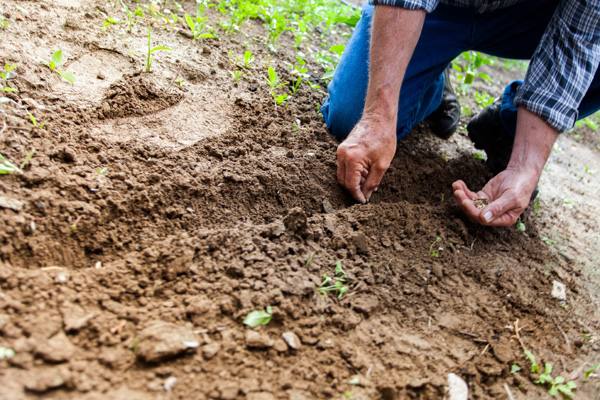 One of my favourite dinner party movie scenes is from Notting Hill. Longing for and missing Julia Roberts’ character Anna Scott, Hugh Grant’s William Thacker and a blind date (Keziah) are hosted at dinner by William’s friends. Discussion turns to the menu, as it does on most early-on / awkward dates:.

William’s date Keziah: No thanks, I’m a fruitarian.

William: And, um, what exactly is a fruitarian?

Keziah: We believe that fruits and vegetables have feelings so we think cooking is cruel. We only eat things that have actually fallen off a tree or bush – that are, in fact, dead already.

Keziah: Have been murdered, yes.

I’ve watched that movie a hundred times at least (true) and always drop my bundle at that scene. Or I would if I had a bundle. Probably. It might be a nice bundle and not deserve to fall out of my hands like fruit from a tree. But I digress.

Recently, having discovered gardening as a hobby, I’m strangely finding myself empathising with Keziah. My five-year-old daughter Ada and I are growing our own carrots, and I’m becoming quite attached to them. Not enough to not murder, munch and macerate them, but still, there are feelings there.

Divorce doesn’t have to mean the death of my heart as well as the marriage, after all. Phew.

My mum is a keen gardener, and for years it’s been one of the ways she escapes from the grind. As her three teenage boys were being, well, teenage boys, my amazing single-parent mother would spend some of her precious and rare spare time weeding, pruning, planting, watering and generally fawning over what has become an eclectic and beautiful sanctuary in the yard of the home I grew up in.

“It’s so good for you, you should do it too!” she’d say at regular intervals over the years.

Most of the rentals I lived in as an adult had bugger all garden (lawn was a luxury during the dry 2000s), and when I did buy a house it was fully-landscaped with one of those goodfor-the-photos-and-brochure, but awful-to-livewith-because-it-has-no-soul, rock gardens with yukkas, birds of paradise (I know some people love them but to me they’re like a weed from the Island of Dr Moreau), and a token Apricot tree, which was great but nowhere near redemptive enough. I had started to build a vegetable patch, but abandoned that during the final months of the marriage, before I moved out.

The apartment I first moved into as a newlysingle man and father had a cute little balcony. It was sparse and often ravaged by wind and rain, like my soul at that point. But I spent enough time on it to want just a little bit of life out there with me/as my proxy.

Ada and I got some rectangular pots and packets of seeds, and spent a morning planting them. It was fun and grubby and then aged three, Ada loved it. We successfully grew some ‘green sticks’ and the odd flower, but the bastard wind didn’t let much else get going.

We moved into a proper house in Newport late last year, and it has a little established garden out the front and some grass out the back, too.

It’s probably down to the previous tenants letting the garden and lawn dry and wither, that my little green thumb girl and me have taken to it with so much gusto. For we truly have.

We got some old blue barrels, colourful buckets and assorted flower pots, and filled them with vegetable compost and soil. Ada and her eightyear-old brother Gus and I chose some seed packets from Bunnings to get us going: snow peas, rocket, carrots, forget-me-nots, petunias and gypsophila.

We also got a pair of garden gloves each and some hand tools. My eldest, nine-year-old Leo, opted out of participating, as is his wont. We wouldn’t win his friendship with salad, it seemed.

If it isn’t clear already, I had no idea really about what to plant in which season, and how much sun, water and ‘good vibes’ each variety might need. We planted them and have been seeing how we go.

The rocket took off at pace (on point, really) and we were soon overwhelmed and I didn’t know whether to ‘harvest’ it or let it stay in the ground until we wanted to eat it. My natural inclination to ruminate and procrastinate meant most of it ‘went to seed’ (my hobby-farmer grandpa says that so it must be a legit gardening term).

Ah well. I now know to only plant a little at a time at different intervals so we can eat it as it’s ready and not have to endure the ugly yellowwhite flower-weed things the plants turned into.

Our snow peas also took off and after a little bit I realised I’d need stakes or some wirey-grid stuff so they could climb (I’m not a natural, if that’s not already clear).

With that procured and jabbed into the dirt, I now believe (read: am reliably informed by Google) that I watered them too much… they turned a yellow-green and then almost-white. I cut their water intake to that of a jockey on race day, and they greened up a bit again.

We recently discovered our first pea pods, filling me with all sorts of I AM AN ORGANIC FARMER NOW feelings of pride. Ada says they taste nice, but I’d rather take photos of them so I can show off to my Nanna when we see her in a few weeks. I think she’ll be surprised more than impressed, but still, I’m her grandson so she’ll have to fake it a little.

I’m really excited Spring is here now, so my new skills, and “mine and Dad’s garden”, as Ada calls it, can really blossom (ahem).

And as a carrot-top, I’ll get to play the cannibal and eat my own, juicy, organic, vegetable-children.