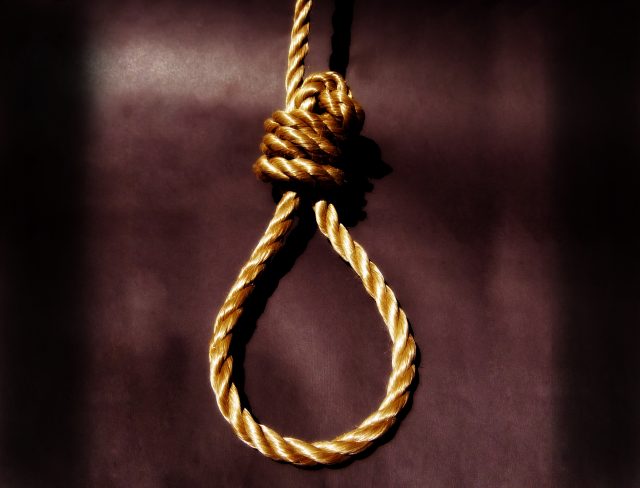 In 1842 two aboriginal men named Tunnerminnerwait (aka Jack) and Maulboyheenner (aka Timmy) became the first people to be hanged in Melbourne, their story begins in Van Diemens Land (now known as Tasmania).

When white settlers began inhabiting Van Diemens Land a conflict over aboriginal land in-sued when settlers seized valuable hunting lands under the British law of Terra Nullius, meaning ‘land belonging to no-one’. In 1804 a group of white settlers attacked and killed aboriginals on a hunting party, this incident sparked the beginning of ‘bush war’ known as the black war which lasted till 1830, claiming 600 aboriginal lives and more than 200 settlers.

In 1832 George Augustus Robinson, the chief protector of aboriginals began his friendly mission in Van Diemens Land to organise the expulsion of the surviving aboriginal people from the mainland to be imprisoned in Wybalenna on Flinders Island. Among these survivors were Tunnerminnerwait and Maulboyheenner, and their wives.

Back in Port Phillip Bay, Melbourne the Port Phillip Association Group lead by John Batman, founder of Melbourne and author of Batman s Treaty were eager to establish land holdings in areas that were off limits without permission of the colonial office in Sydney. Through discussions with the government approval for colonisation of Port Phillip Bay was given, what followed was a frenzy of land grabbing. This had a severe impact on the local indigenous population, within fifteen years of the colonisation of Port Phillip almost all the aboriginals were dead. It was an extraordinary feat for those who managed to survive the slaughter and dispossession.

It was during this period that George Augustus Robinson, decided to bring with him the surviving aboriginals from Flinders Island to Port Phillip Bay, where he was to continue his friendly mission around what is now called Victoria. When the group arrived Port Phillip Bay it was a very violent and dangerous place to be, especially for aboriginal people as indiscriminate murder of aboriginals by settlers was common. However violence was wide spread through the colonies in places like Portland bay where a massacre of the Gunditjmara clan occurred.

Robinson, accompanied by Tunnerminnerwait went to Portland to investigate the convincing ground massacre perpetrated by local whale-hunters. Upon Robinsons return to Port Phillip Bay Tunnerminnerwait and Maulboyheenner along with their wives and a friend embark on their fateful journey.

The group had stolen two guns from a settler and went on a six-week guerilla-style campaign burning stations and killing two whale-hunters. Eventually the group was caught by the authorities and the case went to court, the women were acquitted and the men were convicted of murder. They were sentenced to hang by Judge John Willis, despite pleas of mercy from the defence counsel for aboriginals, Redmond Barry, who ironically was the proceeding judge in Ned Kelly’s trial in 1880. the presiding Judge Willis, stated the purpose of the hangings was to send a political message to Aboriginal people considering taking up arms to fight colonisation by the white settlers, that execution would be their fate too.

The execution took place on the 20th of January, 1842 on Gallows Hill, corner of Bowen & Franklin street, Melbourne in front of a crowd of 5000 spectators. The whole affair was a mismanaged debacle as the gallows were built in haste the men became entangled as they swung from the noose. This was the first and last approved public hangings in Melbourne, later hangings were conducted inside the Old Melbourne Gaol on Russell street in private due to the debacle that occurred.

Sometimes families of the executed were given permission to have the body returned to them, however this was not the case for Tunnerminnerwait’s and Maulboyheenner’s families. The pair was instead buried in the unconsecrated grounds at the Old Melbourne Cemetery located where the present day Queen Victoria Market is located. Tunnerminnerwaits wife and Truganini, Maulboyheenner’s wife returned to Van Diemen’s Land after their husband’s executions.

To this day no one knows the reasons why Tunnerminnerwait and Maulboyheenner and their wives decided to do what they did. We can only speculate that their horrific experiences of colonisation in Van Diemens Land spurred them to take resistive action against settlers when they had witnessed the same oppression and annihilation of aboriginal people in Port Phillip Bay and surrounding areas.

The Melbourne Council plans to erect a memorial to Tunnerminnerwait and Maulboyheenner in their memory on the site of their executions. Hopefully this is the beginning of the unveiling of Melbourne’s invisible indigenous history.