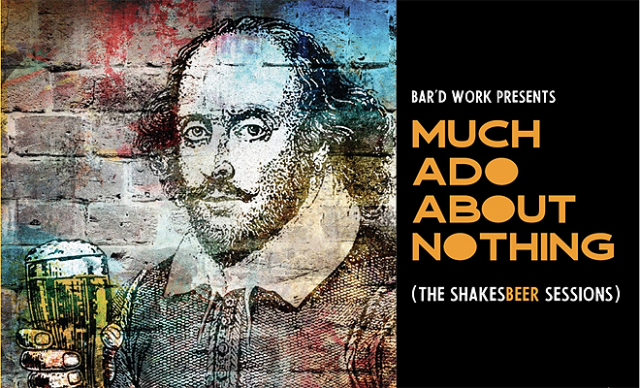 Meet Tim Paige, local actor, director, Shakespeare enthusiast and avid beer lover. Tim has just returned from Sydney where he directed the inaugural season of the ‘ShakesBeer’ sessions, and it was a resounding ‘sellout’ success.

After multiple season’s with the wildly popular “Pop Up Globe” (yes, a full scale replica of Shakepeare’s Globe theatre staging 4 Shakespeare productions in reparatory) across Melbourne, Sydney and Auckland, a few of the actors found themselves knocking back a few refreshing ales when an idea ‘popped-up’ (so to speak…) “Why don’t we bring Shakespeare to pubs?” And after several more chats and definitely several more brewskies, Theatre Company ‘Bar’d Work’ was born.

Melbournians like to think that whatever Sydney does, we can do better; except for beaches…. we can’t compete with that… But when it comes to theatre, pubs and beers, we’re all over it. Company founders James Haxby and Chris Turner felt they had no choice but to give rival city Melbourne a crack at ShakesBeer sessions and in the capable and experienced hands of Tim Paige, we can expect a real theatrical treat. This writer was lucky enough to sit down with Tim Paige and pick his brain as to what we can expect with this ground breaking idea…

Why do you think beer and Shakespeare work so well together?

Neither of them are pretentious! Beer is definitely a drink of the people (no matter what the people of Canadian club have to say).

What is it about Shakespeare that makes it so continuously relevant and important?

Now more than ever, people are searching for humanity. Shakespeare is one of the greatest humanists ever. If not the greatest. His thoughts on Life, Death and Love are some of the most profound things ever written. He expertly examines what it is to be human. Oh, and jokes! He does really good jokes.

Is it hard to make Shakespeare easy for your regular pub punter to access and enjoy?

Not at all! Shakespeare wrote for the people. His writing; although prolific, spoke to all walks of life. Be it a King or Queen or a regular person in the street or Groundlings at The Globe Theatre. We aren’t too precious with our edit of the show and whilst we still keep the bulk of the Shakespeare we definitely have some modern references in there for a 2019 audience. Just as we imagine Shakespeare himself would have wanted it.

Why are ShakesBeer sessions different to seeing normal theatre?

Where else can you smash a pint and parma whilst hearing some of the best language ever written?! Also, apart from being in a show, you will literally never be closer to the action. The show will be happening around your table as you sip on your favourite brew! Although, make sure you hold on tight to your chips during the show. Our Actors count chip eating as audience participation!

When can we see these performances?

Head to our Bar’d Work Facebook page for all the details of our upcoming shows across Melbourne throughout the month of June. And if you want to keep it local, come along to The Cheeky Pint where two performances are booked!