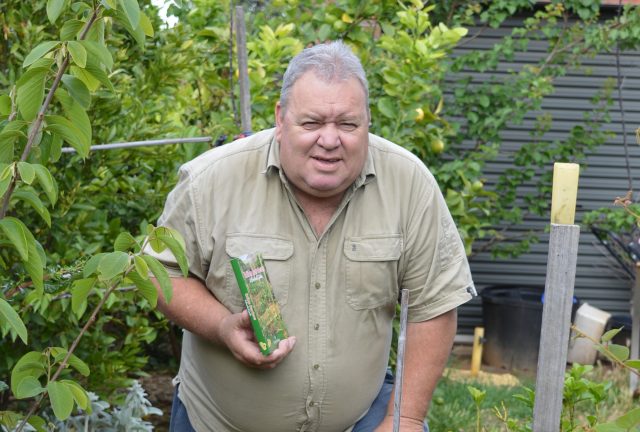 Craig Castree wants to have more choice about what food he puts into his body. He is not fooled by the food provided at supermarkets. His choice of foods is naturally grown, full of flavour, nutritionally balanced, is in season and may have a spot or blemish on the skin. Supermarkets on the other hand are selling foods that are pleasing to the eye, the skins are thicker so they don’t bruise, are all the same size and may have been ripened by gas after sitting in cold storage for up to 12months.

Craig’s interest in growing his own food was inspired by his grandparents who in the 1960’s and 70’s had manicured lawns and flower beds out the front and then hidden behind the shed was the large and over-flowing veggie patch. His grandfather grew the veggies and maintained the fruit trees, whilst his grandmother did the food preserving. The skills Craig learnt from his elders and through his horticulture apprenticeship almost 40 years ago, have been influential but is now replaced with organic gardening, companion planting and a garden layout that intermingles the plants, flowers and fruit trees.

The gardening industry has come a long way from the 1970’s and 80’s when Craig worked in retail nurseries with over-powering chemical smells. Where once upon a time if you had a coddling moth problem with your cabbages, Craig would have sold arsenate of lead, whereas now he subscribes a bulb of garlic. He also recalls his grandfather dipping the bean seeds in a red paste mixed with lead, to prevent the mice from eating them.

Craig strongly believes there is an over reliance on non-organic chemicals to produce food quickly, with supermarkets demanding such a quick turnover from farmers. He also queries the nutritional value of food that is grown so quickly. Craig can grow a good head of broccoli in his backyard in Werribee in around 16-18 weeks, whereas commercial growers cultivate them in 7 weeks.

It was around 2007 that Craig met up with some like-minded people who were interested to start a food swap in Werribee and Hoppers Crossing, and it was through these swaps that he began to invite people over to see his garden and to share his knowledge. He was introduced to the caretaker of Werribee Park Heritage Orchard, and offered to assist with the orchard that was in a poor state. He is now President, and has been instrumental in restoring the orchard and in expanding the successful grafting days.

Craig now has his own business, Edible Gardens by Craig Castree, where he delivers workshops for not-for-profits, business and from his home. Craig Castree truly believes his role on this planet is to pass on his knowledge and skills on how people can grow their own food. “There is nothing better than eating fruit and vegetables fresh from your own backyard” says Craig.

Craig loves talking to people about how to set up their own garden. Craig has a positive outlook and believes people can easily learn to make healthier and more sustainable choices. Craig is also a cheese maker, an apiarist, and has worked as an educator for the Gordon Institute and presented on ‘Vasili’s Garden to Kitchen’ program on Channel 31.

In 2015 Craig was awarded the Environment & Sustainability Award with Wyndham City Council’s Volunteer Awards due to his significant contribution to the Heritage Orchard and teaching the Karen community at Werribee Park. As a teacher of sustainability, Craig believes now more than ever, we need to remember the old adage: if you give a man a carrot, he eats for a day, but if you teach him to grow carrots, he eats for life.

The difference between having a vegetable garden and having an edible garden is fully explored in Craig’s 1st book ‘Edible Gardens: A Practical Guide’ that was released in 2015. The book discusses the food chain today and how we are not really given a choice about what we eat. It explains that by cultivating your own food, you will be strengthening your system, and lower your carbon footprint by growing your own. He suggests linking up with other local growers, swapping food and seeds. This valuable resource is suitable for both the avid gardener and those starting out and needing guidance on how to make the changes to a more sustainable lifestyle.

FROM BLUE TO GREEN: GARDENING IS GOOD FOR THE HEAD