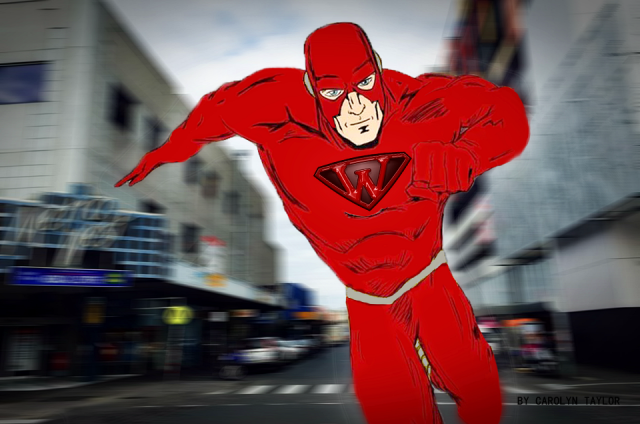 These days its drummed into us growing up that we are individuals, and all special in our own way. True as it may be, that sentiment doesn’t always cut it – sometimes we just want to be bigger, stronger, and faster than everybody else. So if you could choose a ‘superpower’ what would it be? We asked ten Westsiders their thoughts.

Phuong To – ‘Being able to tell if another is lying or telling the truth’. While this power does not seem flashy it is one that I believe can help many people, especially those that need answers. Think of all the criminals that get away because there is no proof to lock them behind bars. Well, this is where I would come in with this power. Think of all the victims of cold cases, case could be closed within a break time. While this power may seem useless against enemies I still wouldn’t change it for anything else.

Carolyn Taylor – Is it a Bird, Is it a plane… Noo, it’s Miss Elasticity! To have the ability to stretch my body like rubber and in any shape or form would be awesome. How would I use this power? I would wrap my entire arms around the planet and give it and everyone in it a great big massive hug! Yes I know this sounds a little cheesy but I honestly think we can all benefit from a group or should I say world hug? Perhaps then the world would be a lot more peaceful, people less stressed, unhappy, and everyone would be a lot nicer towards others, even if its just for that moment.

Grace Magill – Teleportation. Not just for me but if everyone in the world was able to teleport to any location in the universe at any time it’d make things a lot easier and perhaps even solve some of the world’s issues. All you have to do to access this superpower is think what location you want to go to. You’d get everything you needed to get done in time. Think about all the petrol being saved, all the rubbish being kept out of our landfills, even world hunger being diminished. It would give us time, new inventions, and hopefully people would use these powers in a smart way, not bring us the day of reckoning.

Clint Maher – Technology manipulation. It would give me the ability to hack into any computer system on the planet which would enable me to save the world from extreme disparity of wealth. I would hack into all the banks computers and take from the super rich and give to the less fortunate including myself. I could turn off all of the guns and bombs with a single thought and I’d also hack into all intelligence organisations and find out if we have been visited by aliens or if they really did land on the moon.

Jessica Appleton – Super speed – that way you will never be late, could travel lengthy distances all over the world for free, without being bored or inconvenienced like you would be on a boat or plane. If you miss your bus or lock yourself out of your car, you run to where you got to go and you will always be on time, no matter what time you leave. You can get awesome gifts for your friends and family -if you see something online you like but it will take two weeks to get to you, you can just run there that day and pick it up no problem. If you have boring chores to do like clean your room which everyone hates, with super speed you can do it in a blink of an eye. Also if you did almost everything in super speed your days would last much longer and no matter what you had to do you could get it done.

Harley Terrill – I would choose time rewinding. If you could rewind time you would never have to make a mistake. You would have all the time you need to get something done. I would never run out of study time, so I would always pass my studies. I would be able to sleep in every morning and never need to use my snooze button again. If I ever got hungry I could just rewind to a time when there was food in the house. Even being able to go back 5 minutes would be good. If there’s a spill in the house that I have to clean up, I would just go back and stop it from happening.

Chelsea Miller – I would choose the power to refill anything. It sounds like a silly choice until you actually think about it. You could refill your bank account and your petrol tank. Out of milk and cant be bothered going to the shop? Refill the bottle. Someone is annoying you to no end? Refill their bladder constantly so they have to keep running to the toilet.

Lelet Lumani – Jedi Mind Trick. Having a superpower where I could control a person’s mind would be amazing. It means I would have the power to help as many people as I could to not be violent towards each other by using the jedi mind trick on them. I would also use the Jedi mind trick in a way to find out the Tattslotto numbers on a big jackpot so then I could donate half of it to charity. I would especially use the Jedi mind trick on world leaders and stop them from starting wars and violence and make them have peace talks and to agree on things with their fellow country neighbours.

Zachary Boicovitis – The superpower I would choose because my favourite superhero is superman and one of his superpowers I would take is flying, like seriously as if you wouldn’t want to fly all over the world it would be the best superpower ever, helping people out, making sure your friends and family are safe, making the world safe. I would check every single country to make sure that they are safe and watch over them, just flying over the world any time, anywhere. Just to feel like superman would be amazing – he is my all time favourite superhero and to have one of his powers would be the best thing ever!

Wayne Herft – If I could choose to have a superpower I would choose to have the ability to be invisible. I could travel any where in the world and not be seen! I would get on a plane and sit in one of the first class seats. I could visit war sites and exclusive places all for free and without any risk.

A TRIBUTE TO THE VILLAGE THAT RAISED MY WIFE