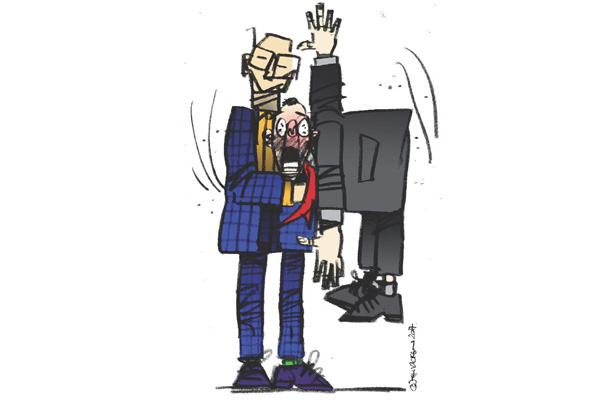 From time-to-time, in my game, a misguided enthusiast will wander off the reservation. It’s during those [exasperating and tedious] moments that the stash of years of accumulated verbal cul-de-sacs, oratorical dead-ends and eloquent blind alleys come into their own. Well, you’d hope so.

As a longtime detainee in the Department of Interstitial Indices, you become a poppy of considerable attraction to ambitious zealots on the hunt for swift, unearned promotion. There had been no attempt on my job for a while. Too long. Just one louche, loaded query from an impudent young pup was all it took to set the wheels in motion: ‘Just what, exactly, does he do around here?’

The letter inviting attendance at a meeting to which I was ‘entitled to bring a support person’ was awkward and bled of human touch. It contained all the legalities. It made all the right noises. It was robotic and repellant. It was copied from a book of rules by a determined human with a gift for the banal. Only the name and date had been changed.

‘The Department is confronting a climate that insists on internal changes to meet external challenges. We invite you to a meeting tomorrow at 9am to discuss this with us. Attending the meeting will be your Departmental Head, an HR representative and an external HR consultant. You are entitled to bring a support person. Please do not discuss this with anyone within the organisation as it may be a breach of confidentiality clauses in your contract.’

Ice squatted in my lower belly. Revenge is a dish best served cold, it reminded me. Refusing to reveal anything to the arid lurking oik who delivered the missive, I returned it to its envelope and bagged it for the journey home. I switched off my computer, ostentatiously donned my two-month’s-salary suit jacket, and, farewelling the comrades I always farewelled, left for the day.

Outside, life was going on. Across the road a woman argued with her teenaged daughter, as only two people diametrically opposed to its subject would argue – the older speaking measured authority, the younger, uncontrolled entitlement. It was nothing new – ambition for acquisition stalled by the reality of a family budget. I was oddly grateful for this interlude of mundane near-metaphor. I knew how it would it end, just as I knew how my plight would play out. I’d seen it all before.

I took my phone from my pocket and speed-dialled  Jan. Typically, hers rang out to message bank: ‘Hi,’ pause long enough to let the caller think that the phone had been answered, then ‘sorry, couldn’t find the phone, leave a message if you like’. Her phone recorded the ferocity of my being thwarted.

Life of a salesman

Keith Bramley*’s tap on my shoulder almost cost him his life.

‘Heading to the station, mate?’ he offered tentatively, carefully, to the venom even he could read in my eyes.

Bram the Scam is the third floor’s slippery PR chief with his litany of triumphs over the gullible, his endless stream of impenetrable murk, and his famous inability to tolerate any display of personal weakness in the face of departmental dreck [‘limpwrist’, as he so delicately put it]. To we of the Interstitial Indices, he represented the polar opposite of our forensic dissembling – he was a rowdy, cackhanded, fat-fingered spruiker of evasion. With his every utterance he tested the limits of tolerance and took one step closer to his own humiliating exposure. And he loved it.

He was not my travelling companion of choice.

In a flash of uncensored bravado, I said this: ‘I would rather sit bare-arsed on a hot barbie.’

This was not high-order Bramspeak. Typically unable to read the message I was sending, Bramley landed on the positive, snorted, punched me playfully in the stomach and took my witticism to mean he now had an audience for the 40-minute trip home.

Desperate to get a breath, I grinned stupidly into Bramley’s face. Such a clean face; such a great hairline; ears pinned neatly to the side of his head; is that an aqualine nose? Bramley’s plain-glass-fraudulent-designer-spectacles, reflecting the evening lights, couldn’t hide the swimming- pool-blue eyes behind them. His even white teeth shaded by plump lips grinned back. I had nothing.

‘Good-oh cock,’ he said from ten centimetres above me. Then, with furrowed brow impersonating seriousness, ‘Been meaning to grab your lapel about a couple of things.’

‘Well one thing, actually. I think I’m getting canned.’

By the time our Collins Street tram had reached Southern Cross Station, Bram was in full flight. It transpired that he too had felt the cold breeze of admin overreach. Utterly unjustified of course. His road to perfidy was straight, devoid of pothole, and lined by enthusiastic supporters applauding his every pronouncement – those bright jewels of communication, or so he would have me believe. After all, wasn’t it he who had introduced the phrase ‘four dimensional incremental alignment’ to universal acclaim from those who were ‘on-message about our parallel logistical concepts’.

Just out of North Melbourne, and in the midst of a classic Bram rant about ‘blue skying transitional paradigm shifts’, a plan began to form. We should become each other’s support person. Trapped in a pincer movement of high-end twaddle from the left and opaque sesquipedalia [using a $50 word when a $2 word would do] from the right, the vapid bean counters would be putty in our hands. And we might as well go for a salary bump while we are at it.

To the victors, the spoils!

Bram seemed to struggle with the concept, but agreed. When he insisted it ‘would need to deliver energies’, it was all I could do not to slap him.

The Inquisition consisted of a lifer, a wannabe and a ring-in. Departmental Head, Arch Croston* had haunted these halls without fear for decades. He knew where several considerable bodies were buried and was therefore bulletproof. His main concern was lunch. Karen Plant*  had a brand new online degree in human resources and was keen to test some of the fine knowledge she had accumulated, in spite of media reports doubting the bona fides of the institution that delivered it to her. ‘Fake news,’ she insisted.

The third inquisitor introduced himself as ‘Mr Stanton*’. Stanton had been poached from one of our leader departments by a large international accounting firm named with letters instead of words. It was very good at descaling agilities.

Throughout his old department, Stanton was remembered by the sobriquet, ‘Chopper’.

It was over before it began.

After some inane chatter, Stanton summed it up thus: ‘Simply put, this game is about elite solution providers architecting compatible landscapes. It’s about potentiating best-in-class metrics-driven resiliency and it’s about going forward with our ambient monitored reboot of our pyramids of modular mobility. Absence of granularity has disincentivised your yield and our top-down lever must therefore be deployed. Your termination agreement will be emailed to you. Now you will be accompanied by Security to your work stations to collect your personal belongings. Counselling will be made available. Good-day.’

Jan thinks that, on balance, they were probably right. Whatever they said. Revenge, she thought, was hardly a worthy aspiration to base a defence on.

Bramley scarcely drew breath before finding shelter in the real estate industry where he continues to engage in ‘unverifiable, context-aware synergies that calibrate elite market thinkers’.

Jan has gone back to work. In half-an-hour, I pick up the kids. The novel is going nowhere.

*All their real names. I remain convinced that revenge is a valid motif.