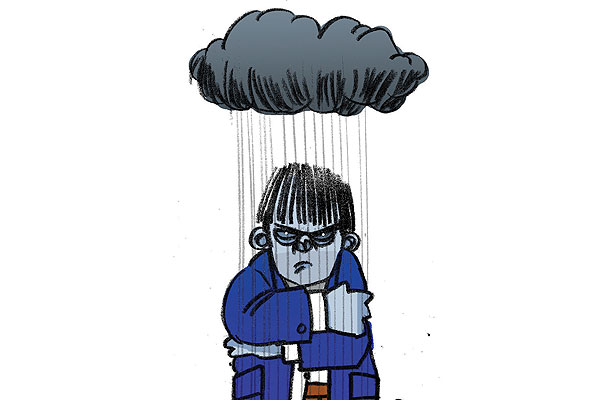 It’s morning, and the night has not been kind to me. The 8.24am from Footscray to Flinders St is late, and crowding my perimeter is a hollowed-out death metal supplicant, leaking the upper register of some insistent mortuary riff through ear buds he stole from a $2 shop.

My last evening’s triumphant homecoming was welcomed by usually energetic partner asleep face down on the kitchen counter, her first Chardy of the evening untouched, but still gripped tightly in her right fist. The twins, Mayhem and Meander safely imprisoned in their playpen, had done their work well and mummy had finally surrendered to the exhaustion that had stalked her all week. No matter, I was home and, foolishly assuming that the offspring too would be in a similar state to their mother, generously offered to cover the nightshift while she snored and burbled her way through delicious, impenetrable unconsciousness.

Equality of family toil? No, this was an opportunist’s grab for the brownie points that my reptilian brain determined were on offer. But it was a false positive.

The early rounds went smoothly. Jan, refusing to forego her vat of old, cold grape juice, downed it in one liver-crippling draught, then having pecked me lovingly on the forehead, was comatose on the marital bed within seconds. M and M, fed, bathed, cotted and read to, followed soon after, and I settled into the broadcast of the death throes of a test match between two cricketing behemoths that was destined for the draw that only hardened fans, or lazy drunks, could be bothered with.

The details of the ensuing misery are no more enlightening than any parent has endured, or will endure until hell experiences a serious cold snap. Suffice it to say, Jan found me asleep, face against the bars of the empty cot, while our progeny were entwined in the other one, enjoying the deep sleep of the just and pure at heart. It was 7.45am, and my face hurt.

I needed to be at my Collins Street desk at 8.45am listening spellbound to Managerial Plumphead asking me the questions that he had formulated overnight in such a way that I couldn’t possibly answer them, thereby demonstrating once more his rightful place further up the food chain.

Shower, clothes, acceptance of praise for faultless parenting and gone by 8.12am. Because I need coffee, I get off the 82 tram early and trawl Barkly St for same, but have to make do with an indifferent cappuccino because I just don’t have the firepower to argue for the long black that I had ordered to help shoehorn me into the day. I ignore the pedestrian lights at Leeds Street, and invite an angry carrillon from the tram I just left, now finding its way back to Moonee Ponds.

Ten minutes late, the 8.24am lopes into platform 5, grinning at my discomfort, and I take it personally. Noise Leak Boy beats me to the middle door of the second carriage and the last front-facing seat on the entire network. I settle into a thoughtlessly autographed seat and begin to wrestle with the nausea that facing the wrong way engenders in me. I note that Mazu, the Heavenly Queen guarding her temple next to the Maribyrnong River, has her back to me and fear this might be some kind of portent.

As we fizz into the valley of the shadow of graf [does ‘Pondlife’ really ‘rock’?], the carriage amplifies the din of  its human cacophony – the sniffers, coughers and exaggerated yawners, the coffee slurpers, the schoolboy braggadocio escalators, the rhythmic clack of the device miners, and the increasingly rare page riffle of the endangered newspaper reader species. All an infringement on my soul, all I take as mocking me.

Then I am aware that the two women opposite are telling each other ghost stories. They frown into their task. Woman 1 is holding forth about an emptied out George Stephenson who prowls Flinders Street’s Platform 10, mystified as to where his favourite fishing spot might have gone.

As we slide by Docklands, sheets of rain rear up from the bay as if trying to wash away that whole architectural catastrophe, and we seek the shelter of Platform 10. I let all the passengers alight, then step out onto an abandoned platform.

And there he is. A lone figure at the wet end looking back at me over a translucent shoulder, his bearded face perplexed. I take the tunnel to Degraves Street, order a proper long black and call in sick.