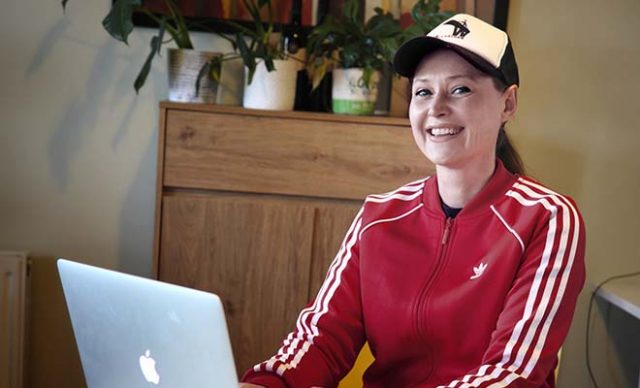 “There were little activities in front yards … people would stick things in their windows.”  Outgoing Instagram Manager Athena Thompson is reflecting, with fondness, on communal art, prolific in our hunkered-down neighbourhoods during lockdown.

It was the sort of thing you’d expect to catch a social media manager’s attention.  Athena set out to support the outpouring of community spirit, knowing some were doing it tough. “So it was easy to use the Westsider platform to shine a light on some of these things along the way,” she continues.

Athena joined the volunteer team just before COVID hit.  In her hands, the next two years as Instagram handler were treated much like a research experiment in audience engagement.

Our chat via Zoom is a chance to peek behind the curtain at this publication’s social media activities and unpack the results of that experiment.  First though, I need to pick my jaw from the ground after inquiring: “Athena, care to talk about your background?”

Media or Communications graduate, perhaps?  Try, scientist with an honours degree in Nuclear Medicine.  And not any ol’ garden-variety STEM wiz.  Athena’s career centred around a testing issue for science: commercialisation — passing on the product of cutting-edge research to captains of industry and eventually into consumers’ hands.  Think, herding cats.

After graduating, Athena worked as a Nuclear Technologist in a hospital; however, she grew more and more frustrated when, for instance, patients moved, ruining the process of tracking a chemical agent travelling through a patient’s body.  Hardly controversial for an individual of uncommon drive and curiosity to grow impatient in a clinical setting.  More fascinating was the business side of running a medical institution, particularly marketing and sales.  Athena applied her knowledge of database management to innovate the handling of patient calls.

Those same skills helped Athena after joining the Australian Nuclear Science and Technology Organisation (ANSTO) to design and teach radiation safety.  Her first task?  Organising a storeroom of information: data, reports … photographs from the 1920s.

‘I reformulated and repackaged what we were doing,’ Athena says.  It proved pivotal.  Within a year, income skyrocketed.  Athena’s subsequent work as ANSTO’s Business Development Manager would one day lead to the establishment of national radiation safety standards.

Athena’s next position was a similar role at NewSouth Innovations, the commercialisation arm of the University of New South Wales (UNSW).  The university were creators of the world’s most efficient solar cells.  “So it was about taking their research and finding partners to license and patent products they’d created and getting businesses to take them up,” Athena says.

Entrepreneurship combined with science when Athena moved on and co-founded Gemaker, a company that guided research organisations and technological startups on a commercialisation journey.  She earned a reputation as a relationship builder, and in 2013 became a finalist in Telstra’s Young Business Women’s Awards.

By the time Athena settled in the west, she was married with a young family, and had left Gemaker for a blue-sky future.  An invitation to manage Westsider’s Instagram account came up, so Athena jumped at the chance to make a contribution locally while pursuing her photography hobby.

Athena joined the online team of co-collaborators: Facebook handler Meagan Kearney and tech guru David Glenny.  And went to work.  Although that still leaves one nagging question: what does science have to do with posting pictures on social media?

The answer lay in a scientific mindset: questioning beliefs, testing ideas and learning from results — a never ending process of improvement.  Principles flowing through to her Westsider role.

“If I post with these hashtags; if I engage people with a question or image — I hope to get this response,” explains Athena.  “Okay, that’s great, but then how can I improve that engagement … increase that following?”

Consistency proved the key to a loyal following.  Athena developed a weekly schedule of themes to engage followers and help them connect with their neighbourhoods, such as photo guessing game, Where in the West?.

COVID hit in 2020, and while supporting local businesses made sense, retail was closed, dining in restaurants prohibited and local events cancelled.  At the same time, online local news reporting was never as important.

The weekly posting roster needed reworking.  A callout for pictures of sunsets piqued followers’ interest.  An inner west artist sent in a photo taken every day in Footscray.  The Westsider Pet series was also popular, as locals enthusiastically began sharing pictures of the most pampered member of their families.

As lockdowns persisted, the Westsider settled into its role as facilitator of local endeavour.

Athena leaves the Westsider with a new online team of volunteers in place, strategies for respective social media platforms — Instagram, Facebook, Twitter or LinkedIn — and the benefit of her approach.  Not to mention almost doubling the Instagram following.

Athena will help her husband run Techlever, a company they created to assist advanced, leading-edge businesses, and be more active in a Facebook group she co-founded, Inner West Women’s Hub.  Though there is something more Insta-worthy.  Who’d have thought … Athena is raising two busy, inquisitive toddlers.