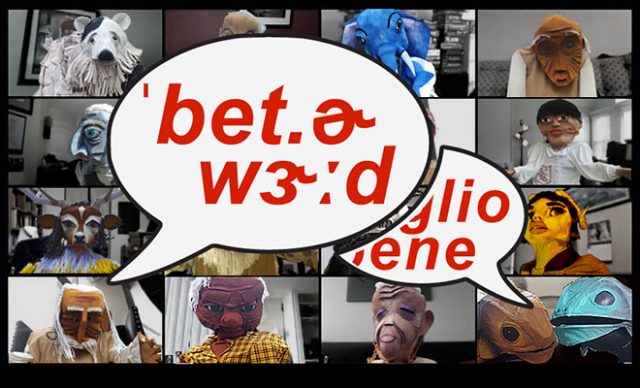 There’s an Arabic word ya’aburnee that expresses the hope that you will not outlive your loved one, because it would be too unbearable to live without them. Universal though this sentiment of intense love is, a specific word to express this feeling is missing from the English language. It’s just one example of a unique and poignant word that exists without translation, yet expresses a social, emotional or physical concepts common across cultures.

It is exactly these kinds of word being explored in a new community art project For Want of a Better Word by Seddon-based company Memetica. With support from City of Maribyrnong Together Apart Funding, the free online project invites local community members who speak languages other than English to reflect on useful words which can’t be translated to the common Australian tongue.

“There is so much expressive richness that exists in languages across cultures,” says Lead Artist Daniele Poidomani. Poidomani’s artistic practice is informed by his background in cultural studies and semiology. “As I learned about semiotics [the study and interpretation of signs and symbols], I came to see language as a collective artwork in continuous transformation. Language is so elusive – everything we call thought or consciousness comes to us in language, you can hardly experience the world without it, and yet so little of it is concrete.”

Originally from Italy, Poidomani’s own linguistic diversity is part of what inspired this project. “I have experienced that sense of loss, familiar to many people who speak multiple languages, when I am unable to express a concept in English that is easily available through a single word in my native Italian – or vice versa.” Through Memetica’s art – which encompasses immersive installations, giant animated characters and inflatable sculptures – Poidomani aims to showcase the wealth of culturally and linguistically diverse peoples’ contribution to Australian culture.

For Want of a Better Word will present a multimedia dictionary of so-called “better words” contributed by Maribyrnong’s diverse community, which have the potential to enrich the Australian vocabulary. To learn more about the project, sign up as a participant, and to explore the ‘dictionary’ when it’s complete, head to www.forwantofabetterword.com. A sister project specifically for children, In Our Own Words, will commence soon. Find Memetica on social media to learn more.

FROM BEHIND SHUTTERS TO THE ENVY OF THE WORLD