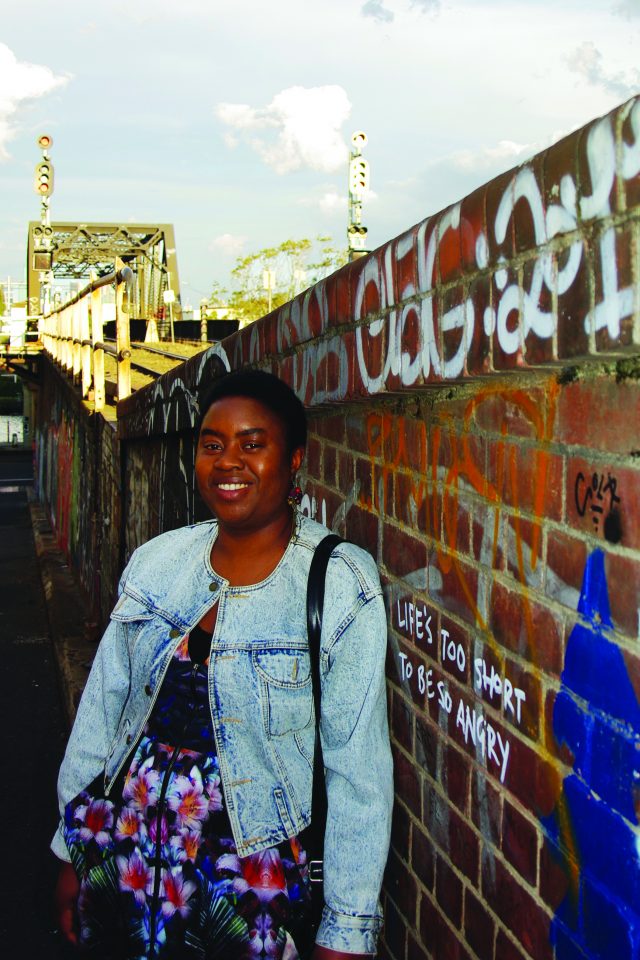 There’s a moment during my research and preparation for this interview that I realise with horror that I’m actually writing a profile on a writer who, among other things, writes profiles and I nearly cancel.

But having known Maxine for a couple of years I decide to go ahead regardless, something I find out that Maxine herself credits partly with her success. Her 2 young kids were with their father so I texted to ask if she’d mind doing the interview at The Reverence Hotel, her reply, YES LETS ALL GO DRINKING!!

Sunday afternoons in spring at The Reverence is a great place to be, so I buy some drinks and we listen to Lilith Lane tuning up before we decide the courtyard is a better place record the interview.

I start by asking her why she writes.

“I’ve always written, I wrote a lot as a teenager, kind of as a way of just processing the world around me, I guess.  I studied creative writing at university while also studying law.  When I finished university I worked various different jobs in different fields but writing was always something that was just constant, I wrote a few short plays for festivals. When I was in my mid 20’s, about a year after I’d finished Uni, I discovered spoken word and I kind of realised that all of the performance work that I’d been writing in short plays was essentially talking heads type stuff and that probably it was quite well suited to that spoken work genre and that’s how I started.

At Uni, I majored in human rights so most of my writing has to do with social justice and trying to process things that are going on in the world and law was partly a way of making sure I could actually feed myself when I finished my writing degree.  I also had an interest in human rights and the process. I think I wanted to be a lawyer when I was young and first started university or that was the aim. I did work in an Indigenous legal centre, I worked in copyright law for a bit, did various things and ultimately realised that it was not for me. It’s interesting, there’s still a lot of word play in the law, trying to make a persuasive argument, putting a certain slant on a story I guess.

When I finished Uni, my writing was always quite performative and I always loved reading my work so when opportunities came up to submit plays to short festivals I’d submit them. They were always about 2 or 3 characters, never a full cast. But once I discovered poetry, I thought, ah ok, this is what I’m looking for, I don’t have to worry about all that characterisation stuff, I can just write a poem, get up at the microphone and perform it. Through poetry I then discovered Slam Poetry. I saw an ad for the Glee Books Poetry Sprint, which is something they used to run at the end of each year at the NSW Writers Centre. It was 60 seconds and at the time I had a young kid and I was like, you know I can just duck out of the house for half an hour, do my 60 seconds, it’s not long enough to mess up you know. So I went and I did this 60 seconds, I wasn’t really aware of slam poetry existing then, I was going there to do my poem and then I won! It was $400 and I thought, wow this is great, how can I keep going? Then I realised my parents used to listen to a lot of the original spoken word poets, people like Gil Scott-Heron. There’s a group called the last poets who were kind of the embryonic stage of spoken word. Once I started Googling and going to readings and things I realised that this was something that really has been there all along but I’d just not recognised it as spoken word or as poetry.

After I’d been doing spoken word for a while, I published a few poetry collections with a very small poetry publisher and then I found my poetry was getting more and more almost back to storytelling, back to the play stuff that I was originally doing. Instead of talking about my own experience, I’d be creating a character and I just sat down one day and I thought, I think this is actually a story, I don’t think I’m writing poetry anymore. There was one poem in particular, I thought the voice of this poem is really a character and why don’t I try writing some short fiction. I gradually started writing over the course of about 4 or 5 years and came up with this collection of stories, called it Foreign Soil and started shopping it around and realised it wasn’t going to be that easy to find a publisher for a short fiction collection. So I went and found a book agent, I thought, I need someone to be able to do this for me. The agent said, ‘You’re not going to get Foreign Soil published, it’s a short story collection written by a debut author, no one’s going to pick it up, are you working on anything else?’. I’d been writing these personal essays just about growing up in the 80’s and 90’s in white Australia as a black person. I gave them to her and she said, ‘This is a memoir and I could sell a memoir for you easily’. So she started shopping this memoir around and generated all this interest and said, everyone has to get their offers in within a month, then a week later, Foreign Soil won the Premiers Award (for unpublished manuscripts) and all of those publishers then came and said, ‘Where’s this amazing book of short stories we’re hearing about?’ So it was really weird but it meant that now publishers looked at my work immediately, instead of it sitting on what they call the ‘slush pile’ waiting for some intern to go through and read them. The award was pretty crucial. Because it turned into 2 books, the agent was then able to negotiate. The publishers also wanted a novel as part of the deal, so my agent said, ‘Have you got a novel?’, I said, well no, I don’t happen to have a novel  lying around, and she said, ‘Have you ever considered writing one?’,  I have but its only like half an A4 page of ideas, which I sent to her. She sent it out to publishers and they all started bidding on it, half a page of ideas!”

Spoiled for choice, Maxine chose Hachette as her publisher and was offered a 3 book deal, Foreign Soil, the memoir, which is in progress and a novel. She also currently writes profiles for the much respected Saturday Paper.

“The journalism is always something that I’d done in drabs, publishing maybe 4 or 5 articles a year, then The Saturday Paper got in contact. I received this email out of the blue from the editor saying, ‘I’ve read your book (Foreign Soil), I reckon you’d be really good to write this section, how you feel about that?’ And I said, Ok, and that was it. That was one of the great things to come out of Foreign Soil. I don’t think of myself as a journalist, because the stuff that I write is very much having a conversation with somebody. Straight journalism is my weakness as I definitely has a disregard for non- biased fact reporting, I always want to put a particular spin on it, but I think when you read good journalism that is really well crafted it stands out.”

I tell Maxine that it appears to me that she is a successful writer but what does she think and what advice can she give to emerging writers?

“I think every writer always feels like a fraud, almost every writer has imposter syndrome, it’s like you go to the Writers Festivals and you feel like I’m here with all the real writers and I’m the fake writer, please don’t anybody find out. I guess it’s just confidence. You know what, when someone says come and do this, I know I can actually do it. To have not been paid for your work for so many years to having your work monetarily valued is massive. This is the way I’m making my living now, almost….almost.” She laughs.

“It’s important to say yes to things, getting past that fear of doing new things, saying I’ll just have a go what’s the worst that can happen?  When the Saturday Paper rang me, my first instinct was to say no, I don’t write that kind of stuff, I’m a poet, I write fiction, but then I thought, I’m still writing characters, the people I’m interviewing are still going to be characters, just getting rid of that fear and trying new things is crucial. Be bold, don’t let your fear hold you back and all feedback is valuable, even if someone tells you something’s bad, they might be wrong but they could also possibly be right.”

Maxine Beneba Clarke is a local writer and the Author of Foreign Soil which is published by Hachette. For the record, Maxine only had one glass of red wine.