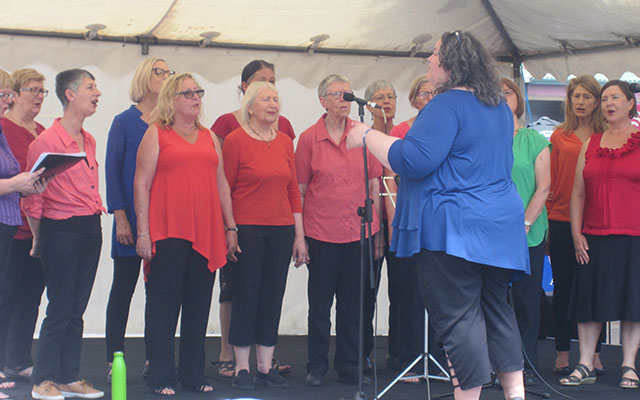 How can a choir operate during lockdown? That was the question confronting Willin’ Wimmin, a women’s community choir based in Williamstown, in March 2020. Luckily their choir director, Steph Payne, had the answer – Zoom.

She was an immediate subscriber to the online platform, and quickly learnt all the tricks. Their library of recordings stood them in good stead, enabling them to practise their existing repertoire in separate parts, then sing along to the full arrangement, which brought them as close to singing in a real life choir as you can get. Except that they weren’t standing next to their fellow singers, they were warbling away in a room in their own home!

Of course they learnt new songs too, including some well known favourites like ‘Up on the Roof’, as well as ‘Pigogo’, a traditional Zulu song, and Harry Belafonte’s ‘Turn the World Around’.

They continued their traditional ‘coffee break’ (BYO of course) and chatted in small groups in breakout rooms. Each week they had a ‘guess the child’ photo spot, which enabled them to find out more about the early lives of their members.

At the start of 2021, the Hobsons Bay Arts Team kindly allowed them to practise in the Rotunda in Commonwealth Reserve, Williamstown. Singing outside, with the spectacular backdrop of the city lighting up, was an amazing experience.

They were delighted to be able to include three of the songs learnt in lockdown in their performance at the recent Yarraville Festival. They are looking forward to their next gig at the Newport Fiddle and Folk Club’s Theme Night, when they will sing ‘Road Train’, a song written by Lizz Lethlean, one of their members.