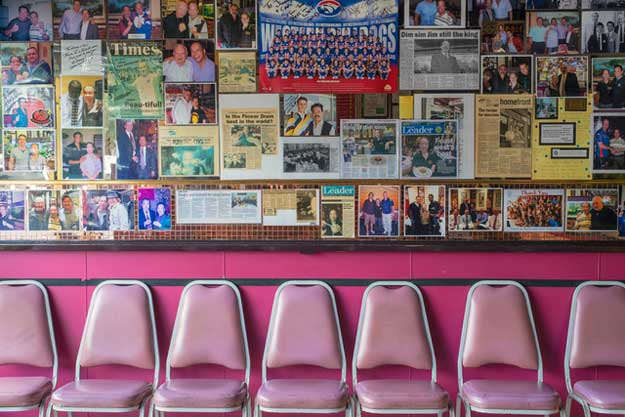 Warren Kirk, also known as the ‘Westographer’ has been documenting Australia’s quintessential suburbia for the last thirty years, often focusing on the neighbourhoods of Melbourne’s west, where he calls home.

Both evocative and nostalgic, his photos capture a way of life that is slowly disappearing, along with the people who lived it.

Having amassed over 9 million views on Flickr, and following the success of his first book Westography, Warren has just released his new book Suburbia: The Familiar and Forgotten.

Warren has lived in the ‘west’ for 25 years and started taking photographs 30 years ago. He’s always had a hunter-gatherer type of mentality, so once he had a camera in his hands it was a perfect fit.

“Foraging for images is a great pastime, especially for a person who can become easily obsessed. Now, of course, it’s about documenting the marginal and endangered of suburbia.”

He finds it difficult to explain what subjects attract him, but his images reveal that it has much to do with the passing of time, the beauty of the mundane, and the time warps and living museums that are some living and work spaces.

“The kitsch and quirky appeal as well. All the stories associated with my images, and the ones told to me by folks I’ve photographed provide a connection. People dotted all over the place that I can drop in on for a chat.”

Warren has witnessed many changes over his time in the west, including Footscray winning a second premiership after a 62-year intermission.

“There’s also real estate prices, council rates, the number of places to buy food and coffee, the streetscape. Every other house has either been renovated or knocked over and replaced with something called a ‘townhouse’ but to my eye looks more like a shithouse. But I still love the vibrancy of the area.”

So what small joys does Warren find each day?

“Being able to do what I love everyday – photography, discovering another ‘nugget of gold’ in the suburbs, and hanging out with my dog as the quiet observer to it all.”