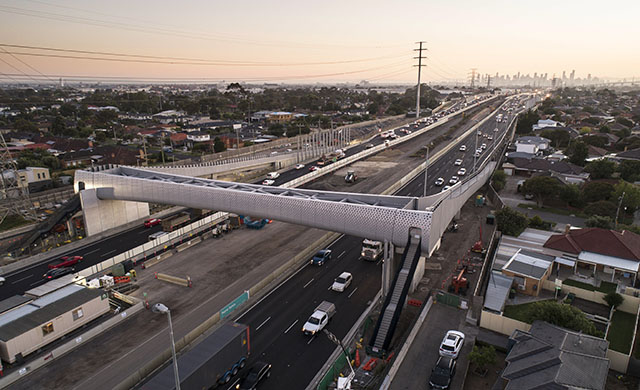 West Gate Tunnel Project crews are gearing up to carry out major construction works on the West Gate Freeway and the M80 interchange this summer.

Kicking off in early January 2021 through to late-March, crews will take advantage of the typically quieter time on the roads to carry out a busy program of activities, which includes demolishing and rebuilding sections of the south-bound Grieve Parade overpass and a bridge at the M80, realigning ramps and constructing new road pavement.

All this work will go towards widening the West Gate Freeway from 8 to 12 through lanes, reducing congestion and travel times for people travelling from west.

In order to get this work done the West Gate Freeway will be closed for five days at the beginning of January, and further ramp closures at the M80, Geelong Road and Princes Freeway in January and February. Grieve Parade over the bridge will also close for up to a week before being reduced to one lane in each direction over the freeway.

Drivers travelling between Geelong and Melbourne should avoid using the West Gate Freeway as there will be delays of up to an hour. Importantly, drivers are reminded to pay attention to and most importantly obey the changed road conditions.

“The West Gate Freeway will be a hive of major construction activity this summer and we recognise that our works will cause significant disruption to drivers,” CEO of the West Gate Tunnel Project, Major Transport Infrastructure Authority, Peter Sammut said.

“We are urging drivers to plan their travel ahead of time and keep vigilant and drive safe during the construction blitz.”

“We know this work can be disruptive, but we will work to have it done as soon as we can, and it puts us one step closer to increasing capacity on one of Melbourne’s busiest roads”

While there has been less traffic on major roads during Coronavirus restrictions, crews have powered through to achieve some major construction milestones for the local community including opening a new pedestrian overpass at Rosala Avenue and installing hundreds of noise wall panels along the freeway. The finishing touches are also being put on a new pedestrian overpass at Muir Street that will open to the community in December.

For more information on closures and detours visit bigbuild.vic.gov.au

BRAND YOUR BRIDGES FOR THE WEST GATE TUNNEL PROJECT

BLITZING THROUGH THE SUMMER WORKS ON THE WEST GATE FREEWAY