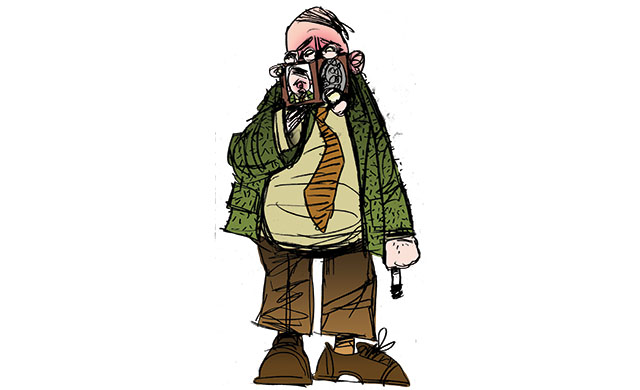 We’re getting closer to the nub of this. Soon, we will know how we got here. And, perhaps, where we are going. The journey was important. You now know me. The only son of an entrepreneurial mother and a dissolute, feckless father. I am surrounded by hucksters, thieves, freebooters and grifters. Along with my four sisters, Chrissie, Rob, Myra and Lindy-Lou, I am at least one of those. My defence [and, perhaps, rehabilitation] wholly resides in how my innocence was exploited by my family and assorted hangers on, and entirely explains why I stand before you today, a supplicant for mercy.

I am now 16 years old. My path was dictated by a mother who, mystified as to why the laws of the land oppressed her natural instincts, decided to eschew them in exchange for speedier access to a secure and bountiful life.

[‘What if everybody behaved like you?’ asked her spiritual guide, Swami Tucker Clamour. ‘Then I would be a fool to behave in any other way,’ she told his departing back.]

Not long after I drew my first breath, our father, Maurice ’Shortcut’ Shevel, vanished. In his absence, I was trained as a diversion to my womenfolks’ pursuit of the dark arts of shoplifting. My highly choreographed clumsy attempts at pilfering would distract the attention of store staff while my family relieved the shelves of items that could be readily swapped for cash. So successful was our enterprise that mum eventually opened the Warehouse of Hope – a late-night, cash-only emporium that moved our excess accumulations on to those in-the-know for a comprehensive discount. So talented had we become, we began to take advance orders from customers.

As word of this honeypot spread, bees were attracted. The first leaner to ‘attend’ with his hand out was lazy, local flatfoot, Detective Sergeant Bryce Appleby. A nice smart TV two iPhones and a sous vide kit bought his silence. At least temporarily. He then traded this nut of intelligence for his release from a debt owed to Nitro O’Nitro, CEO of local biker gang, Maggotfeast. O’Nitro arrived astride his Valkyrie Fourpot 5000 surrounded by a stink of henchmen and followed by his business partner, Russian emigré Sligo de Putin at the wheel of a Trabant – the vehicular symbol of the fall of the Eastern bloc.

They had anticipated a seamless takeover of this ‘going concern’ but hadn’t counted on the force field that was my mother. A compromise was reached which created a new venture allowing mum the security her burgeoning business craved and Messrs O’Nitro and de Putin access to a thriving cash business – the best kind.

There were also some other mutual benefits enjoyed by mum and Mr O’Nitro that eclipsed my understanding.

Next came shire councillor Barnett Ryder. In spite of his youth [19], Barnett had manufactured a personality of such odium that his mere presence in a room could guarantee its emptying. He too had heard of the Warehouse and was there to execute his own hubristic, entitled annexation. While his clumsy attempt ended in his arrival, at Mr O’Nitro’s behest, neatly folded into a rubbish bin, it was not humiliation enough to halt his ambitions.

Weave into this melange the return of our prodigal father with his own form of blackmail and we have what the English are pleased to call ‘a right bollocks’. Dad’s grab at the brass ring found him cable-tied astride a chair in the cold room of the HQ of Sligo de Putin’s Go in Peace ‘departure’ franchise – his successful chain of funeral parlours. Shortcut Shevel, as he is better known, was awaiting the needlework of Fitty McTavish, go-to tattooist for the criminal classes, who is about to cover dad’s body in permanent confessions of his many misdemeanours.

Then there was a loud banging on the door.

Barnett Ryder was apoplectic. This thug, this oaf on wheels had not only queered Barnett’s clumsy banditry but had publicly demeaned him by effortlessly tossing him into a rubbish bin. Worse, his minder, his own brother, Plate Ryder, had sniffed the wind through his alarmingly thick skull and abandoned Barnett to what was clearly [even to this dimwit] the inevitably of his fate. Revenge would have to be had. And, as we all know, that’s a dish best served cold. The Warehouse of Hope could wait.

Detective Sergeant Bryce Appleby had kept a watching brief on the antics of the Warehouse. While his deal with Mr O’Nitro had provided short-term comfort, Appleby had this nagging doubt that his end of the transaction didn’t meet his deeply held expectations – that he should be better provided for [going forward].

The incident involving the undoing of Barnett Ryder reached his ears through the network of scuttlers and sleazes that he maintained through a successful recipe of threat, cajolery and sudden storms of violence. He sensed that Ryder might prove a useful ally in the reclamation of his [perceived] entitlements.

On the pretext of allowing assault charges to be pursued against his attacker, Sergeant Appleby met Barnett Ryder in his electorate ‘office’ – his mother’s sun-room. Appleby eschewed phone calls – they can be recorded.

‘Listen, son,’ Ryder sneered at the empty-eyed walloper, ‘I don’t know what you’ve heard, but what actually happened was a strategic retreat on my part allowing me an upper hand on what I plan for the future of these reprobates. I don’t see your presence in any of that.’

Barnett Ryder was clearly a little turd, but his naive eagerness for revenge could be managed.

‘You are obviously a man of singular mind,’ offered Appleby, adding some sweetmeats to the hook he was casting. ‘But we find ourselves at a crossroads. That way,’ he motioned towards the floor, ‘lies the law. I pursue assault charges and we all spend hours in the courts. Nitro O’Nitro cops an easily-paid fine and you feature on the front page of the local rag as the village idiot, alongside a photo of the bin that your ruined career is stuffed into.

‘Or, you continue to surveil this gang of ‘roaches and report to me their every move. When they reach peak exposure to jail time, I send in the heavy mob and have them all eating porridge at Her Maj’s pleasure for a decent portion of their four score and ten. Meanwhile, we disappear the Warehouse assets and go our separate ways.

‘What do you think?’ asked his raised eyebrows, knowing exactly what this warty chancer was thinking.

While taking on other peoples’ ‘think’ was an anathema to slithery Barnett, even this cocksure fathead could glimpse the upside for his own pecuniary advancement. Better, a bit of surveillance work would give his insubordinate jellyback of a brother the opportunity to atone for the cowardice he demonstrated in scuttling away from Nitro O’Nitro’s psychopathic, unprovoked assault.

‘I will need badges to lend authority to our investigations,’ oiled Barnett.

‘Can be arranged,’ replied Appleby, remembering the fake ‘Freddys’ he kept in a locked box for situations such as this.

Barnett’s brute of a brother, Plate Ryder, took to his new task with relish. Somehow his challenged synapses recognised that his size [substantial], his general amorality [anything, anywhere, anytime] and his chosen mode of transport [a Chaos Steampunk 9000 Crisis] would allow him entreé to the Maggotfeast tribe, given the opportunity to pit himself against the gang’s entry criteria. While Barnett was mildly surprised at his brother’s unlikely bit of elliptical thinking, he didn’t really care much as long as he did the work.

‘What can you bring us?’ snarled Gavrilo ‘The Crowbar’ Nero when Plate found him at his favourite watering hole.

‘I have these,’ lisped Plate, throwing a pair of Freddys on the bar in front of the gang’s Sergeant-at-arm’s third glass of lime soda [with two cherries and a splash of cream].

Crowbar eyed the badges through reflector shades, and looked up at his tailgunner, ‘Hot Fat Vat’ McKinnon. The latter gave an almost imperceptible nod.

Crowbar raised a thumb and with that Plate Ryder became a noviciate in the Maggotfeast brotherhood, and that was the moment the finely-tuned machine that was the Warehouse of Hope began to unravel.

The Ryder bros met daily; Plate to report the latest intelligence from the frontline, Barnett to distill its meanings with a view to unleashing the full force of the law on our hapless gang. When Barnett passed the skinny on to Detective Sergeant Bryce Appleby that Shortcut Shevel had been captured, bound and transported to the cold room of Sligo de Putin’s Go in Peace ‘departure’ HQ, his base coppy instincts told him it was time to act.

Mum had leaned into her task of listing Shortcut’s numerous infringements with some glee, but was constantly being interrupted by Fitty McTavish to clarify spellings and grammar. The integrity of his ink art demanded he get every nuance absolutely correct. Such was his reputation, he refused to mark another’s body, no matter whose body that was, with his silky ink skills where there might be even the slightest chance of blowback. He had standards. For her part, mum kept interrupting Fitty to clarify exactly what he was saying. Time was dragging as each became increasingly miffed with the other.

Then their bickering was interrupted by a loud banging on the front door.