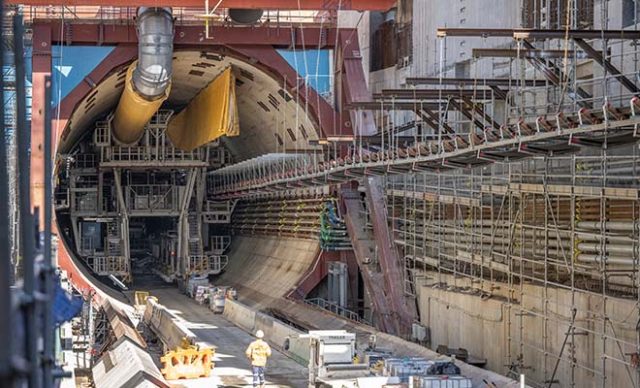 At the end of April, the West Gate Tunnel Project’s second Tunnel Boring Machine (TBM) set off from the Footscray site to dig the 2.8-kilometre citybound tunnel.

This comes eight-weeks after the first TBM started digging the 4-kilometre westbound tunnel, with it already travelling more than 500 metres towards the West Gate Freeway.

This marks a momentous milestone for the project as both TBMs are officially on the move and signifies that the project is one step closer to delivering a vital alternative to the West Gate Bridge for Melbourne.

When complete, the project will deliver twin tunnels under Yarraville between the West Gate Freeway and the Maribyrnong River, which will help slash travel times to and from the CBD.

The project is so much more than the tunnels, with works progressing across the project and more than 30.6 million worker hours clocked to date.

Along the West Gate Freeway, works to widen the freeway from eight to 12 through lanes continue with more than 70 per cent of widening works now complete.

Crews have also been busy installing the new and improved noise walls with 80 per cent now up, providing residents with quieter homes, schools and neighbourhoods.

There’s been significant progress at Hyde Street where the new ramps to connect trucks with local industry are being built, which help take thousands of trucks off local inner-west streets.

Closer to the city, the construction of the new elevated roadway above Footscray Road is progressing, which will provide a connection from the tunnels to CityLink and the Port. The launching gantry is making strides in getting this job done, having already stalled 620 metres of the new road deck.

The bridge foundations in the Maribyrnong River are complete, enabling works on the bridge that will connect the West Gate Tunnel to the elevated roadway to continue. The next major milestone will see the steel girders that form the base of the new bridges lifted into place.

Crews are also preparing to build Australia’s first veloway that will run along Footscray Road, which will give cyclists a safe express route to and from the city and support the growing number of Melburnians riding to work each day.

Keep up-to-date with all the exciting progress across the project by following our Facebook page, Instagram page or by visiting westgatetunnelproject.vic.gov.au

DRIVING HOME FROM THE CITY?