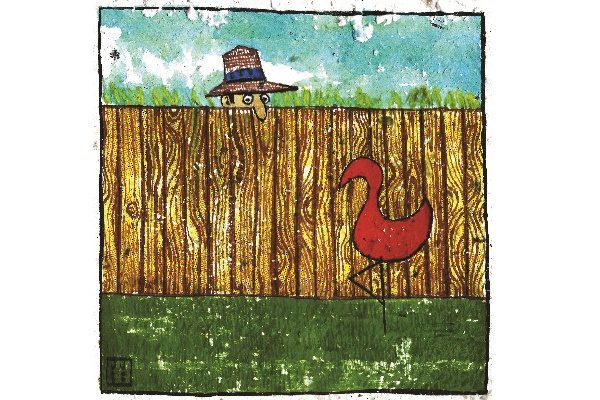 From an early age, I can remember my mum being obsessed with other people’s front lawns. On family car trips she would stare out the window, exclaiming enviously to us in the back seat, “Look at those beautiful lawns Mario. Why can’t ours be like that?”

When I was about 9, we moved into a house that my father built. Out of town and on 40 acres. He also, quite possibly on the urging of my mother, surrounded the house with about two acres of grass. As a little boy, all I ever wanted to do was mow that lawn. I’d hassle my dad and he’d say I wasn’t old enough. I should have realised when, on one such occasion after I’d whined, he wryly smiled and said to me “Soon son, very soon”. I remember wondering about that strange smile but in the moment it didn’t bother me. I was so excited when I finally got to push the Victa around the yard until, about 5 minutes in, then I hated it from that point on.

Thus began the teenage years of taking turns with my older brother in trying to weasel out of mowing the lawn. I’d envy my friends, who didn’t have to do this chore, or did it and got pocket money whilst only mowing a Nano-fraction of the grass. I’d visit cousins in Melbourne spaghetti mansions and stare open mouthed at the expansive concrete yards and I was especially jealous of my older entrepreneurial cousin who went out and bought two sheep. One he called Victa and the other he called Catcher. He never mowed a lawn again. His sheep eventually died but by that time he’d spawned a couple of child labour types who did the job for him.

Briefly there was excitement when dad bought a ride on mower, but again five minutes in, forget it! My brother got into it more and was especially neat, whereas I used to ride over trees chasing rabbits and stall it on rocks. But regardless of my disrespect for the machinery, flora and fauna, every second week I had to mow the fucking useless lawns!

Personally, I’ve always thought front yards were useless. No one really uses them as they’re mostly for show. As long as your grass is greener and more obsessively manicured, then you’ll be the envy of the middle classes.

Perhaps my mum believed that having a perfect front lawn brought untold riches and happiness, or perhaps, like Mrs Bucket, she just wanted to keep up appearances.

I grew up and eventually bought a house – a bloody corner block, which meant two nature strips to mow. I had a reasonably-sized backyard and an almost similar front yard, which I was always going to fence in for private use, maybe even plant, through some ancestral calling, tomatoes, capsicums and cucumbers. On the first mowing of the devil nature strips, I remembered my grandparents’ place. Not a blade of grass anywhere. Front yard, white pebbles with a concrete flamingo (I kid you not) bang in the middle, concrete out the back and a long, overgrown and unkempt nature strip. When my Nonno rang council to come and mow it and they told him it was his responsibility, he went to the shop and bought some Roundup and created a bare dust strip. I learnt quickly by that to try and always appreciate what’s on my side of the fence and to try and not give too many fucks about anything outside that boundary, even if it’s wildly screaming in your face.

I only recently sold that house in the regional Victorian city I grew up in, so didn’t come out too flush. But I was happy that I didn’t have to mow the lawn one last time as the guy next door did it as a favour (and I used to wish I was him…sucker!).

Now millionaires fight over mowing my rented nature strip and I don’t stop them. One mows it because it keeps him fit and sometimes I’ll give him a beer. The other one mows it to spite the first one (they don’t get on) and then there’s another one who mows it just to make a mess with his beloved blower vac! Being a renter in an increasingly million dollar suburb, means I sometimes envy them, but getting to know people in your community means you also find out about their considerable issues and failings.

Over the years I’ve had a few different jobs and at times, either through work or self-induced stress, I’ve been visited by the black dog riding the green eyed monster. As an apprentice cook, the lowest of the low points had me fantasising about being the delivery guy, or the dishwasher or the waiter. But then they would screw up and get ripped to shreds and the envy would subside.

When I took a “cushy” job at TAFE, I’d drive past road workers digging holes laughing and calling them “suckers”. After a few years working within a bureaucracy and the stress of teaching, I’d find myself driving past similar road workers thinking, “I wish I just had a job digging holes!” Then I left that job and it was awesome… but sometimes, just sometimes, I wish I was back there.

I’ve worked for myself a fair bit and each time I say never again until I have to answer to someone (generally an idiot) and I wish I was back taking care of business. Now, again I work for myself. I work every weekend and at times it sucks. But then I see a homeless dude silently begging out front of Coles and I feel grateful for what I’ve got. On one occasion I dropped $5 in his hat and his eyes lit up. The joy on his face for a moment at least made me envious of his lifestyle. Then without a bye your leave, he grabbed his cap, cardboard sign and small bag, got up and quickly left, possibly to score or possibly to eat but suddenly I felt grateful again. Having seen the rise of the visible homeless in our fair city makes me think we’re all only one unfortunate event away from being out on the street (and possibly two power blackouts away from people eating each other).

So live in the moment people and don’t stress about what you don’t have. Be kind to everyone as well as yourself. The grass is not always greener on the other side of the fence. Sometimes it’s nothing but a Monsanto desiccated dustbowl of a nature strip and sometimes it’s fake, plastic lawn (PLAWN). Of course a lot of the time it’s real and depending on water restrictions it may even be a beautiful lush shade of green. But very rarely is it ever perfect.

Mario Varricchio is, amongst other things a raconteur, a regaler of tales and a man of letters.