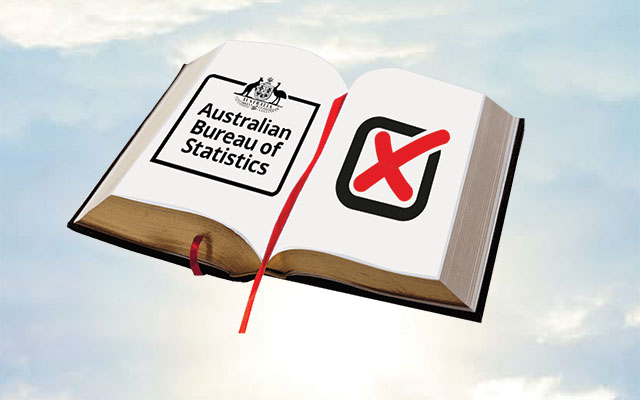 Wait, what  – vote? Don’t you mean tick? Well, yes and no. Of course your Faithful Atheist wants you to tick “no religion” if you do not actively worship, but increasingly Question 23 of our Census – “What is the person’s religion?” has become more and more linked to the dreaded “P” word – politics!

If you are asking yourself, “which side of politics?” then you haven’t been paying attention. A vote for “no religion” is a vote for the continued separation of church and state, two institutions that, if the Christian Liberal right has their way, will be intrinsically linked, even though “no religion” was the largest swing in the previous Census in 2016 (from 20% up to 30%).

Again I hear the processing chip in your mind whirring. “But isn’t the Census just to gather information and allow us to analyse statistics?” The simple answer is yes, but the responses to different questions across the Census do provide us with a broader understanding of the population, demographic, and yes, personal beliefs of the people living in this country, and therefore will influence policy, spending and economic development – which is why accuracy is so important.

So for instance, if you aren’t particularly religious but have previously just quickly ticked your own past religion, or the religion of your family background, now’s the time to tick “no religion”, so that the numbers of actual religious people aren’t skewed, which would give the current Liberal Government licence to pursue initiatives that represent the wishes of a minority, such as the ironically named Religious Freedom Bill, which has the potential to allow religious institutions to discriminate, and the funding of already wealthy religious institutions.

Don’t chose ‘Atheism” under “Other” either! Although you are not religious and think you are indicating this, “Other” actually counts as a religion, even though this does not fit under the High Court’s 1983 definition. Talk about a corruption of the process!

And if you choose “Jedi”, thinking you’re being funny and original, you’re not – 50,000 other clowns chose that last time, and every single one unknowingly put a tick in the “religious” column. Idiots, it’s worse than a donkey vote.

If you’re still not convinced, then here’s a final reason. A country we admire on a lot of levels – New Zealand – has us well and truly beaten in this department, with over 50% of respondents ticking no religion at their last Census in 2018. We love beating the Kiwis at rugby, cricket and netball, and this is one area we need to beat them too, even though they aren’t currently hostage to a Christian right government.

In summary – we aren’t a Christian nation, and really haven’t been for decades, so on August 10th – Census night – use your pen (or a mouse click) to send Canberra the message.

What is a “Faithful Atheist?”

I ask; why must “faith” be bound to institutions in order to be considered valid? My faith is deeply felt and founded in self, family and community and deserves to be the equal of any organised religion or other form of spirituality in terms of moral value, standing and respect.

We accept organised religion’s monopoly on the concept of faith, and yet “faith” as defined in the Oxford dictionary merely states a belief in something or someone. I have faith that Government will (mostly) make good decisions for society. I have faith that my kids will look after me when I’m old. I have faith that breakfast will sustain me through the day. All important parts of a person’s life, but not once was religion mentioned – just belief.