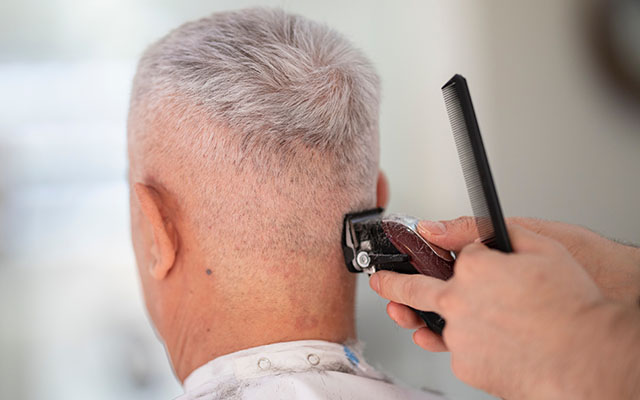 It is true, not all legends live in Yarraville. However, this is a man who has been a much-loved part of the Yarraville community for over 20 years. Spending more of his days and time in his beloved shop than his own home, so perhaps he does live in Yarraville after all. This man is none other than Henri.

Now when it comes to our own barbers and hairdressers, I’m sure we’re all a bit biased and call them the best. Because truth be told we trust them with something quite pivotal in our daily appearance. Nevertheless, when in Yarraville, Henri definitely holds the crown for best barber. Although, it is not just his exceptional way with hair that makes him the best, but rather the man behind the scissors. Even though he has been performing the art of barbering for the past 28 years.

Often you will find Henri as busy as a bee from the moment the sun rises, to the time dawn begins to settle. You have to be nice and early to secure yourself a spot on Henri’s chalk board before the list of names is half way out the door. However, when you are lucky enough to secure your spot, or when your name is finally up on the list, you’re welcomed into his chair. Here is where the real fun begins. Within this chair you find yourself fully immersed in the world of Henri, and if you look and listen closely enough, you’ll get to know Henri. The shop is beating with Henri’s favourites tunes, consisting of old rock, the blues and jazz. Occasionally catching Henri humming or grooving to his favourite songs. Then when you’re placed in front of his glorious mirror, you’ll see postcards from New Zealand with images of the beach and cartoons fishing. Again, giving you a sneak peek into some of Henri’s hobbies and favourite destinations.

Once you’re ready to go and Henri has had a sip of his espresso coffee, the hair cutting begins. Henri begins snipping, and begins to ask, “how’re you going” or “what’ve you been up to?”. Always interested to know what new and exciting events have occurred since your last visit. My dad has been receiving haircuts from Henri for the past 20 years, which to me says a lot about a person. If you’re ever lucky enough to see Henri cut my hair, you’ll hear him go on about my once long curly red hair, smiling knowing he’s doing his job of embarrassing me.

Now whilst Henri has been part of my life for two decades, I’ve never stopped to ask him his favourite part of Yarraville. Which, you guessed it, is the people. Henri adores that he has been able to watch Yarraville grow into a “vibrant, multicultural, family orientated place”. Of which he has grown to love the community, a community that he believes expresses a lot of care for one another, and is always getting behind local businesses, such as himself. Henri believes Yarraville is a very special place, where he has been able to form and develop connections over many years. Henri wishes to keep Yarraville the same special place it has been for decades.

My dad and I often discuss the humble nature of Henri, and I’m sure if you told him how incredible, funny or awesome he is, he would swiftly direct that attention somewhere else. Especially when I told him I was going to write this piece about him, he told me to write something else. But I truly believe, as I’m sure other locals do, that Henri is a local living legend who has impacted generations over the past two decades. Becoming a fond memory in many of our lives, and a friend.

Never be shy to give Henri a wave when walking past, what he calls, his “fish tank”, as one of his favourite parts of the day is watching the people go by.

THE HEART OF YARRAVILLE IS STILL BEATING

THE YOUTH JUNCTION INC FREE WORKSHOPS ARE BACK!