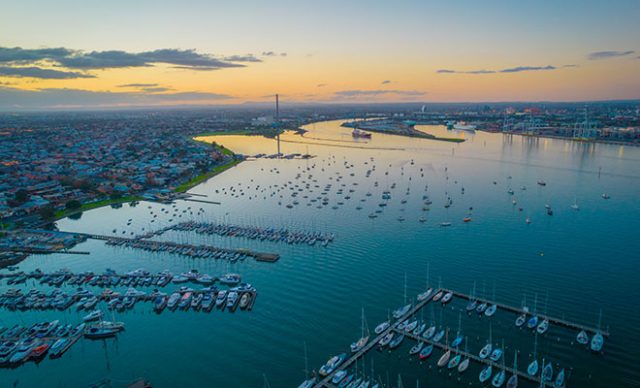 The Westsider is thrilled to feature Oscar Cedano’s stunning aerial photo, of the Williamstown Marina looking north towards the Yarra River, Westgate Bridge and Sandridge Docks, on this issue’s cover.

Where did you live in your formative years?

I was raised in Ibague, a small city on the central mountain range of the Colombian Andes. I arrived in Australia three years ago settling in Laverton in the western suburbs of Melbourne.

What is a highlight of living in the west?

There are a lot of reserves, like the Laverton-Altona Reserve Walk inhabited by many animals and plants which provide me with great inspiration to develop my photography.

The suburbs I have enjoyed covering, piloting my drone, including Laverton, Point Cook and Altona Beach which had given me some fantastic content. The highlight is Williamstown as it is a suburb where that provides so many amazing spots to catch from the air.

Tell us more about attaining your drone pilot stripes. It sounds impressive.

Due to always being drawn to taking photos, especially of nature, I was interested in discovering a different way to capture large landscapes. I took the plunge and purchased my first drone and became a drone pilot and have no regrets, I’ve had so much fun using my DJI Air 2S.

Throughout the process, I have become fascinated by how birds watch the world from above and different perspectives. Becoming a drone pilot is something that was born as a hobby and it has become a passion. I would love to collaborate with others to incorporate aerial photography into the community and commercial projects in Melbourne.