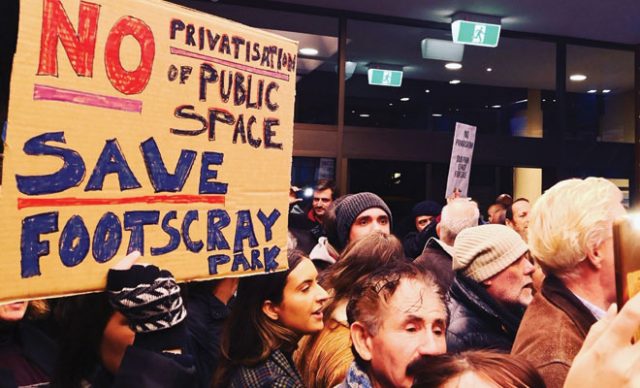 Much of local discussion over the course of this year has centred around Maribyrnong City Council’s plan to allocate a portion of Footscray Park to the Melbourne Victory Football Club female and junior Football Academy. With debate heating up and a decision imminent, The Westsider has sought a response from both sides of the table and presented – please do your own research and draw your own conclusions.

By Gemma Cafarella and Sharon Schwab

Melbourne Victory Football Club is looking for a location for a new soccer academy. They plan to build three sports fields, a 500-seat stadium, floodlight towers, and fences. The academy will be in use up to 40 hours per week: generally 4-9pm weekdays and on weekends. The Maribyrnong Council are proposing to give them a lease for 21 years, rent-free.

The much-loved heritage-listed Footscray Park is not the place for the soccer academy.

First, Footscray Park is currently freely available for a range of uses It is used informally for a range of sports: cricket, rugby, AFL and soccer. People walk their dogs, attend community events and socialise. The Melbourne Victory proposal will see fences built which will keep the community out when we most want to use it. We believe Melbourne Victory will charge fees for people to use the academy. This would mean that after school and on weekends, the area will only be able to be used by people who can afford the fees. There is no other space within the park large enough to be used by community for non-organised sports games.

Maribyrnong already lacks green space, and demand on existing parks is increasing with rapid development. Under the proposal, Footscray’s 20,000 residents will be left to share a much smaller space between off-leash dog walkers, sports players, barbequers and kids coming and going from the new playground. The proposal will make the academy the dominant form in the park, and negatively impact the experience of the park as just that – a park. It would create adverse conditions with the intrusion of unwanted light and noise, use of car parking and increased traffic access for private use.

And demand on green space is only set to increase – rapid development means that Footscray’s population is set to boom, with most of the new arrivals moving into apartments. Accordingly, we need more green space, not less.

The construction would also negatively impact the park’s ecosystem, which is home to wildlife and birds living in the ponds, reeds and trees. The whole lawn will be dug up, and the ground compacted. A hybrid-synthetic surface will be created, causing carbon emissions and the use of synthetic materials in the soil. Meanwhile, there are concerns about run-off into the rare saltwater river, and the impact of floodlights on nocturnal animals in the park.

Finally, Melbourne Victory is a private company that operates for profit. It is astounding that the Maribyrnong Council and Andrews Government would think it appropriate to hand over an important and well-used public asset, along with $10 million in state funding, to a private company to run a for-profit academy (The academy is funded by Melbourne Victory and Sport and Recreation Victoria). And surely if the Council were determined to see this incredibly valuable piece of public land used differently, a range of community groups would have been interested.

We believe that if a company wants to set up a business, they should buy or commercially lease land like any other business. In this regard, we note that there is disused land around McIvor reserve in Yarraville (currently home to the Yarraville Hockey Club), which could be used to establish a world-class sports precinct.

Footscray Park has been used and loved by the people of the West since its creation in 1911. The people of Footscray campaigned for it to be reserved as a park, and built the park themselves with donated money, plants and labour. And in the spirit of 1911, the people of the West are determined to fight to save our park.  Last Tuesday night, hundreds of frustrated locals attended a rally full of community spirit at the Footscray Town Hall. These people are part of a community movement that is growing momentum to save our beloved Footscray Park.

We urge you to join the fight. Council will take submissions – an email or letter with your views on whether the land should be given to Melbourne Victory – until 16 August 2019.

For instructions on how to write to council, or to get involved in the campaign, go to www.savefootscraypark.com.

Email savefootscraypark@gmail.com to get on the email list for regular updates.