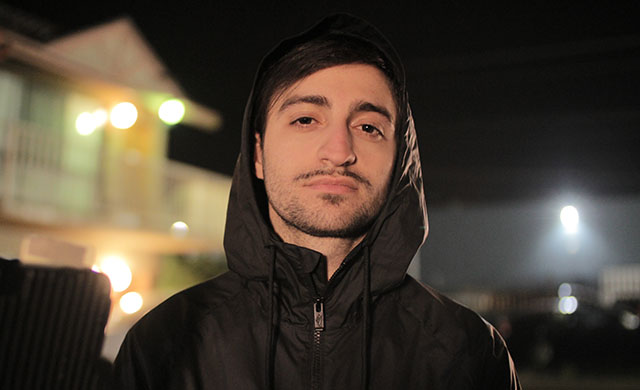 News just in: Adrian Ortega’s first full-length feature, Cerulean Blue has recently become available on popular streaming service Stan, and in overseas markets via Amazon Prime. The inner west is well known for its diverse range of artists making their mark, but how exactly does one make the leap from a local film school to the big leagues? The Westsider sat down with Adrian recently and find the answers to that question, and more.

I was born and raised in Seddon by a single mum. I’ve lived in the western suburbs of Melbourne my entire life and I currently reside in Footscray. My mother is of Italian heritage and her parents immigrated to Melbourne in the 1950’s, settling in Altona North where my grandmother still lives to this day. I’ve always loved the inner-west with its culture, its people, its multiculturalism and especially, its rich history.

When did you first become interested in film creation?

Film has fascinated me as far back as I can remember. My mum always likes to reminisce about the first time I saw The Wizard of Oz when I was a toddler and how mesmerised I was by the film. My father is also a film buff and so on weekends growing up we would often go to the cinema together. It definitely runs in the family!

You have deep local roots having studied at Footscray City Films. How did that knowledge and experience help you in the industry?

I was fortunate enough to study at Footscray City Films after graduating from Footscray City College which is the high school on the same campus. After telling my Year 12 media teacher Bill Lensky (he also ran the independent TAFE course on screen and media at Footscray City Films) that I wanted to study architecture, he said he saw a future in film for me and convinced me to pursue it. Footscray City Films, which is now called Footscray Film School, was immensely helpful in setting me up for a career in film as it’s such a practical course. They threw me in the deep end and made me work on all aspects of film production across all departments. I spent two years making horrible short films and discovering my strengths and weaknesses before really getting into the industry. By gaining knowledge and experience in all aspects of production, it helped me better understand the craft, which in turn helped me become a better producer. My advice for upcoming producers is to work in all aspects and departments in film, so that when you’re in charge of running those departments one day, you have a better understanding of how long it takes to complete a task, or why that task you’re delegating is harder than it seems.

You previously had been involved in short films and documentaries, what prompted you to progress to feature films?

I always wanted to make feature narrative films, but in my early 20’s I felt that I had nothing to say or express, and that my perspective wasn’t unique enough. I made documentaries on social topics as they were surrounding me daily. I’ve always been drawn to things that may seem normal to me but unknown to others. I was a nightclub videographer for five years which led me to my first short film Bodycrash which is about a niche dance-music subculture night-life scene in Melbourne. My second documentary was about urban exploring in Melbourne and how teenagers were attracted to the danger of it. It wasn’t until I experienced tackling depression, obsession, regret, and isolation in my early twenties that I felt I had a story with an emotional core to tell in a feature-narrative format.

Your films have been official selections at local and international festivals, how does a filmmaker from Seddon find themselves featured on the world stage?

Starting a career in filmmaking is not easy or for the faint hearted. It takes years of determination and focus to get good at it. I was able to make Cerulean Blue on such a low budget by calling in hundreds of favours from crew members who I had once worked for free over the last ten years. You never know if your film is going to be well received by audiences or festivals alike. The most important thing I’ve found to focus on is making something that’s true to you — something that you make for your own fulfilment and no one else’s. If you make a film for everyone, you’re more likely to make a film for no one. 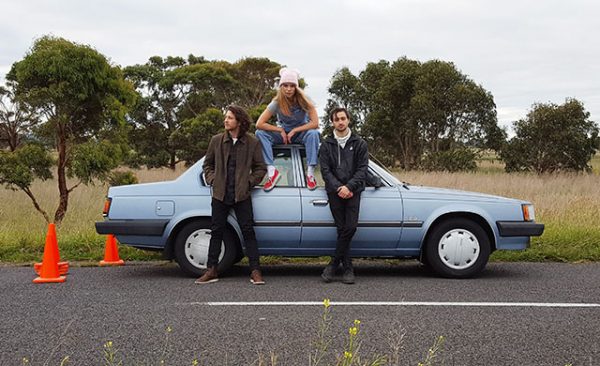 So Cerulean Blue is your first independent film feature, how did it come about?

Cerulean Blue is the product of collaboration with a lot of talented young filmmakers from Melbourne. Each of them gave their time and put in a lot of effort into helping the film come to fruition. In my experience this is the best and most efficient way possible to make a movie when you have a shoestring budget like I did. My industry peers have all been very supportive and I’m very grateful to those that gave their time, blood, sweat and tears to help make this film over the last five years. I initially wrote the film thinking that it would never be made as at the time I didn’t have the money to finance it. Thankfully the crew really believed in the project and a lot of them generously donated their time or agreed to be involved despite my budget as they understood it was a passion project, not one that any one was profiting from.

Can you tell our readers what the film is about and its inspiration?

Cerulean Blue is a road-trip dramedy set against the Australian landscape. Introverted, coping with obsessive compulsive disorder, and chasing a memory from the past, Alex is determined to drive cross-country to Melbourne. Planning on only having the winding highway for company, he reluctantly picks up Lily, a high-spirited hitchhiker running from something with as much determination as Alex is running to something. The film is about love, loss, and all the things in-between. It was a tough time in my life, but creating Cerulean Blue really helped me overcome my inner demons. It challenged me not only creatively, but emotionally. The film was something I felt I needed to share with the world as it’s about people who find themselves in particularly dark places in their life and what it takes to see things from a different perspective.

Many people live with and through anxiety, how does the film aim to reach out to them?

Anxiety and Obsessive Compulsive Disorder (OCD) are themes I felt I didn’t need to have to explain in the film. The lead character suffers from extreme anxiety and OCD, but I never wanted him to have to explain his mannerisms or his character in general; they were simply a part of him. His condition didn’t need a backstory. Some audiences have struggled to understand why he is the way he is, but I’ve found that the film isn’t necessarily for those people. A few people with OCD have reached out to me and said that they really related to Alex’s character and how OCD has affected their lives and relationships with other people. It was really touching to hear that they were able to identify with Alex and his character as I wanted to help people with similar struggles to see that they are not alone.

Another interesting point to make is that we shot this film in 2017, way before COVID-19, yet the themes resonate with people now more than ever. People have connected with the themes of isolation, anxiety, cleanliness, and the need for human connection, which is something people like Alex and others who suffer from his condition have dealt with their entire lives, so it’s strangely topical to today.

Many westie locations are featured, how did you choose them?

I spent a year scouting locations and trying to find interesting places to film. I had no money for production design, so the challenge was to find backdrops that were ready to film in as they were. Luckily, Melbourne’s west is full of interesting places to shoot. I had connections at some locations which helped immensely, but others I just went in and politely asked if we could film there. A lot of people I approached were very enthusiastic about a film being made at their establishment, so it was a bit of a win-win. My favourite location was at The Footscray Pub, where we filmed a pivotal scene at where the lead characters have an interesting confrontation with two strange men.

Your film is available to watch on Stan in Australia and Amazon in the US and UK, what was the process like – from concept to production – to work with and be accepted by huge streaming services?

It’s a very long process which took about five years in total. A big learning from it is that making a feature film will always take a lot longer than you anticipate! I started writing the script for Cerulean Blue in late 2015 and it debuted on Stan at the end of December 2020. The film had its world premiere at the 68th Melbourne International Film Festival in 2019. It sold out both sessions and was granted a third by popular demand. After the festival, we secured a sales agent from Fighting Chance Films who had relationships with Stan and Amazon. They negotiated for months to secure the deals and eventually the film ended up where it did.

How does a film like yours achieve ‘success’ via streaming services (and what is your idea of success)?

My idea of success is for the film to be widely accessible and well received by its intended audience. We live in the era of streaming so the film has had tremendous success on both Stan and Amazon — a lot more eyes on it than it would have had say I’d made it ten years ago. The film has made its way to a much wider audience than it would have if it had just had a small domestic cinema run. Stan also recently put it up as a Stan Exclusive and its highlighted in the Australian cinema section so it’s getting lots of eyes on it! Success to me isn’t about money. If you’re in the film industry for the dollars, well, you’re in the wrong industry.

What are you working on now?

I am writing a new feature film which is being co-written by a collaborator of mine, Michael F. J. McCallum. The film will also be co-produced by Senie Priti who plays Lily in Cerulean Blue. Senie’s directorial debut, Alba, is having its World Premiere at Flickerfest on the 25th of January this year, which I also co-produced alongside Senie herself and my long-time collaborator Patrick Jennings. Under my production company Proud Wing Films, we are shooting a new short film at the end of February and are working on a web series pilot that we are trying to get funding for starring Lucas Pittaway from Snowtown. 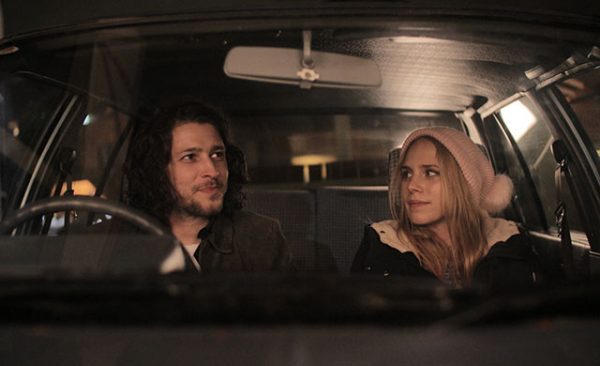 POWER OF THE SCREEN – A PEACEFUL WEAPON AGAINST WAR