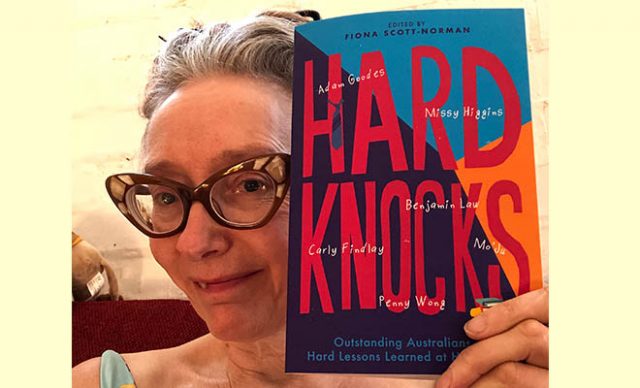 – 22 high profile Australian’s share their ‘Hard Knocks’ at school and, how it shaped them into the strong, resilient people they are today.

Quick question – how was your school experience? I have heard of people who didn’t mind school, or actively enjoyed it, not sure I’ve glimpsed one in the wild. In Australia, popularity often means you were good at sport, of Anglo extraction, and possibly blonde.

For many of us though, school is a lonely, traumatic experience we draw a “thank goodness that’s over” line under, and vow never to think of again. Until we have children ourselves, of course, or niblings, and watch helplessly as they negotiate the same minefield.

School can be a brutal experience. It shapes us, but not entirely in the ways we think. Hard Knocks is a collection of interviews with successful, feted Australians, all of whom were either outsiders, bottom of the barrel, faking fitting in, or dealing with difficult circumstances. It shows that you’re not alone in your despair, and that, actually, not fitting in and peaking at high school has advantages once you leave. Why did I think to write this book? Oh yeah, I was that kid.

When people find out I was unpopular at high school – and I was weapons grade unpopular – they pull a sympathetic face. They lean in, touch my arm, and say, ‘Of course, you’re a redhead’. And I’m like, ‘Ah no. I colour my hair. I was bullied because of my personality’.

For years I was the most excluded student out of a cohort of 2000. Why me? To misquote Jane Austen, ’It is a truth universally acknowledged, that a school in possession of a homogenous student population, must be in want of a scapegoat.’ The schoolyard is a hierarchy, someone has to be bottom of the pecking order, and it’s usually the kid who’s most obviously different.

I was ill-prepared for boarding school at 11. I was precocious, and clueless on how to behave around kids my age (only child, adopted, much older parents, moved around a lot, friends were mostly books).

At primary school I was ’no-mates McGee’ and spent lunchtimes playing chess with, bless his heart, my form teacher. I was super tall, short-sighted and gangly (Marfan’s syndrome), also hypersensitive and flinchy (shouty Dad). Also, not sporty, thank you for asking.

At high school I was visible in an unwelcome way, notoriously ‘other’, and pointed out to new students during their orientation. “There’s the hockey field, that’s the main dining room – avoid the mashed potato, it’s always lumpy – and over there, that tall hunched skinny girl with knock-knees, glasses, and neediness you can see from Jupiter? That’s Spider.”

Great nickname for a little girl, sigh. And once a nickname’s stuck, unless you can rock it, you’re dead meat. I did not rock it. I was very, very lonely, made jokes to pretend I didn’t care, buried myself in books and cartoon strips, and batted myself like a moth against the closed window of acceptance.

But that’s schools for you. They’re all chockers with school kids desperate to fit in, because evolutionarily, social exclusion led to, well, death. Way back, being cast out by your community meant no access to food, fire, or support, so we are wired to experience sheer existential terror if we don’t belong.

School can be brutal, as we instinctually do What It Takes to stay close to the warmth of that metaphoric fire; suppress the bits of ourselves that are deemed unacceptable, suck up to the popular group, shun anyone on the fringes.

Australian government research suggests that the proportion of students affected by bullying, whether it’s cyberbullying or IRL, hovers at around one in four. A quarter of every school is a lot of kids not fitting in and suffering for it.

I doubt 25% would touch the sides of who’s having a terrible time, because stacks of “just fine thanks” kids are hiding who they really are and scared numb they’ll be found out. Bit of a secret; it’s not just you. School is frequently, genuinely, quite shit. It is categorically not the best days of your life.

Hard Knocks features 22 of the most intriguing, talented, accomplished and admired people in Australia. They’re leading big, creative, courageous lives, shining bright, pulling others up behind them.

The intention of Hard Knocks is to support and inspire kids doing it tough at school. Those kids are the ones who are ‘different’, who look around and know they don’t fit in, they’re not ‘normal’, and suffer for it. It’s far more kids than we realise.

I hope it’s clear that misery at school or growing up doesn’t mean there’s something wrong with you. It means school can’t accommodate anyone who deviates from factory settings, and that’s on the school and the system. In my experience and belief, the less ‘normal’ you are, the more you didn’t fit in, the more interesting, complex and empathetic you become.

So Hard Knocks is for the queers and the weirdos and the artists and the creatives and the kids of colour and the neurodiverse and the imperfect and the povvo. For the abused, the traumatised, and the shunned. I see you. This book is for you.

Fiona Scott-Norman is an inner-west Melbourne based writer, performer, DJ, director and broadcaster to name a few.

Hard Knocks, RRP $29.99 is out now, and available in all good book shops. And definitely at The Chestnut Tree Bookshop in West Footscray.