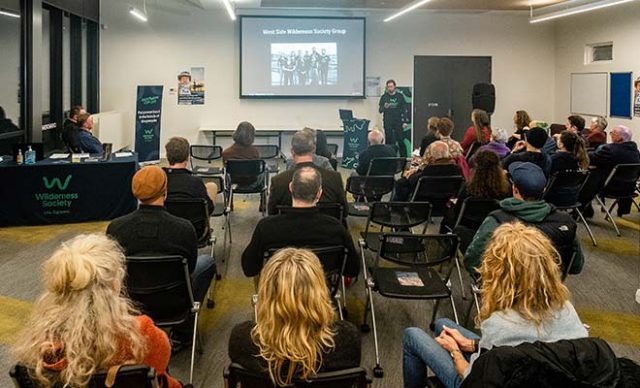 On the 5th of May 2022 the Westside Wilderness group hosted a Community Forum at the Newport Community Library Hub. The theme of the event was community participation in environmental decision making i.e. Why communities need a genuine seat at the decision-making table from the beginning; Why communities need access to the information held by decision makers and corporations, and; Why there should be a right of appeal when community objections are ignored.

Speakers included Jodie and Gareth, from the Westside Wilderness Group. Jodie spoke of how seeing the devastation of clear-fell logging in our old growth forests close to Melbourne pushed her to action. Gareth shared how the birth of his son and appreciation of natural areas motivated his involvement. They both also highlighted the importance of community action in the creation and preservation of our local natural areas such as Newport Lakes and the Jawbone Reserve.

Mallory Pryde, a community organiser for the Wilderness society addressed how those in power are prioritising the interests of fossil fuel executives and companies over community/constituent interests.  She then gave a wider perspective on the role of community action in the moment we find ourselves in; as a nation, a community and individuals.

The key speaker was Victoria Jack, a campaigner from the Wilderness society who took us through the experience of a local community objecting to a proposed coal mine bordering the Wollemi National Park, home to the last wild stands of the Wollemi pine.  The positive outcome achieved by the Wollemi community in their campaign to stop the NSW government granting a coal mining expansion near the national park was inspiring.  News of this result had only come through the day before.  It showed that ordinary people can achieve extraordinary things when their passion is matched with determination, focus and strong community support.

Though we in the western suburbs of Melbourne live in an urban and industrial environment we have numerous natural and reclaimed areas of important habitat which needs safeguarding and protecting.  Greater transparency when it comes to freedom of information is needed and an end to inauthentic and tokenistic ‘consultation’ framed as participation. The community deserves a seat at the table in the early stages of environmental decisions.

Judging on the response by those present at the forum the night was a great success. The general feeling seemed to be a combination of relief that we weren’t on Zoom and enthusiasm that community action could be effective in the campaigns for sensible environmental decision making.